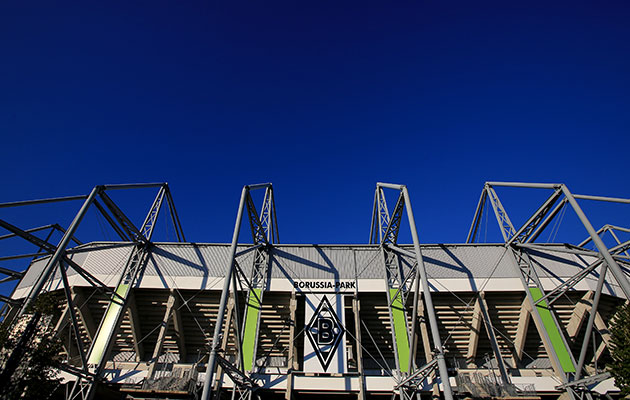 Monchengladbach is one of 150 soccer cities featured in Libero, the digital travel guide for football fans. Regularly refreshed with new destinations and travelogues, Libero is a one-click treasure trove of football trip tips, tales and trivia. See www.liberoguide.com/monchengladbach/. 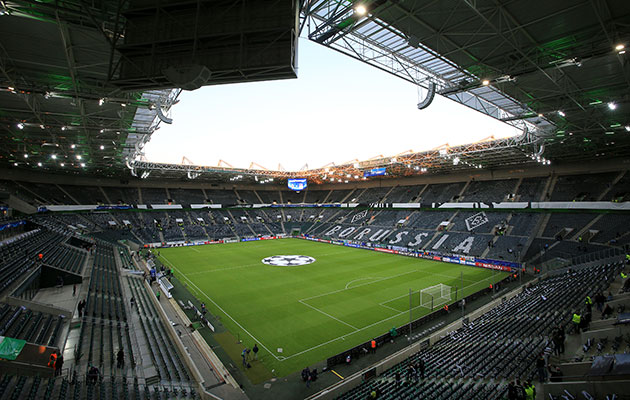 The modest community of Monchengladbach, 60km from Cologne, is known for one thing, and one thing only: Borussia. Borussia were a dominant power in the 1970s, winning five titles and making five European finals, winning two.

The decade saw many epic battles between Borussia and the other Bundesliga superpower of the 1970s, Bayern Munich. Between them, the pair provided much of the German national side who won the European Championship of 1972. But the personality clash between captain Franz Beckenbauer and Monchengladbach lynchpin Gunter Netzer saw the Borussia man sidelined for the 1974 World Cup.

Borussia’s base was the Bokelberg, a modest ground in residential Eicken where Borussia had been founded in 1900. Here coach Hennes Weisweiler brought through some of the greatest talents ever to grace to German game, among them Netzer, Berti Vogts and Rainer Bonhof.

The savvy Weisweiler built a swift, attack-minded side who won the Zweite Bundesliga then, with Jupp Heynckes and Herbert Wimmer, held their own in the Bundesliga. With spectacular goals from Danish international Ulrik Le Fevre, Weisweiler’s young Foals won the league in 1970.

After losing a penalty shoot-out to Everton in the subsequent European Cup, and with Rainer Bonhof coming through, Borussia won another title in 1971.

The most memorable night at the Bokelberg came that October, and the 7-1 thrashing of Internazionale. The match was later annulled after Roberto Boninsegna was allegedly hit by a Coke can thrown from the crowd.

Weisweiler found more talent in slight striker Allan Simonsen, who starred in the successful run to win the UEFA Cup in 1975, the culmination of Weisweiler’s 11-year tenure. By then, Netzer had left for Real Madrid, his own farewell the winning goal in the 1973 Cup Final.

With Uli Stielike as the defensive midfielder, a more complete Borussia won three consecutive titles from 1975 to 1977 but again had little luck in the European Cup, losing on away goals to Real Madrid and the final to Liverpool a year later. This was one of several crucial games with The Reds that established a long-lasting supporter friendship.

The UEFA Cup win of 1979 ended a memorable decade. The following one had its highlights – the cup final of 1984, lost on a missed penalty by Borussia star Lothar Matthaus soon to join his Bayern opponents – but Monchengladbach were in decline.

Struggling to keep up with the likes of Bayern and other moneyed clubs, Borussia slipped down, unable to squeeze more than 34,500 into the cramped Bokelberg and increase ticket revenue.

Although relegated in 1999, Monchengladbach were able to build the Borussia-Park on Hennes-Weisweiler-Allee and move from their beloved Bokelberg.

Relegation and slow subsequent recovery coincided with the opening of the Borussia-Park in 2004. Promoted in 2008, Die Fohlen enjoyed an excellent 2011-12. Under coach Lucien Favre, young keeper Marc André ter Stegen and striker Marco Reus helped gain a Champions League qualifying spot. Despite defeat to Dinamo Kyiv and the departure of Reus to Dortmund, Monchengladbach have rediscovered their mojo and now just need more regular European action.

They took a major step in 2014-15 with a third-place finish in the Bundesliga and a return to Europe’s premier competition for the first time in some three decades.

Now based in the town’s western outskirts, close to the military-town-within-a-town of Rheindalen, the base for British forces in Germany, Borussia have marked their return to the Bundesliga in front of an average 50,000 fans.

Opened in 2004, Borussia-Park replaced the legendary Bokelberg, which had served Die Fohlen for 85 years.

Borussia had bought a sandy plot in Eicken in March 1914. Nicknamed the ‘De Kull’, the Gravel Pit, the ground was opened in September 1919 as the Westdeutsche Stadion.

Later named the Bokelberg, the arena saw several improvements as Borussia gained success in the 1960s, with a roofed main stand and a vociferous standing Nordkurve among a capacity of 34,500. This proved too small for Borussia’s biggest matches, played in Dusseldorf or Cologne. Residential displeasure scuppered any plans for expansion. Talk turned to a new arena.

It was general manager Rolf Russmann who instigated plans to transform a former British military barracks into what would become Borussia-Park.

Taking two years and costing €87 million to build, Borussia-Park was opened in July 2004. It retained a Nordkurve terrace, part of nearly 19,000 standing places within a capacity of 54,000. For international matches, such as the four already staged, this is reduced to an all-seated 46,000. Overlooked for the 2006 World Cup, the Borussia-Park hosted three games for the 2011 women’s version. 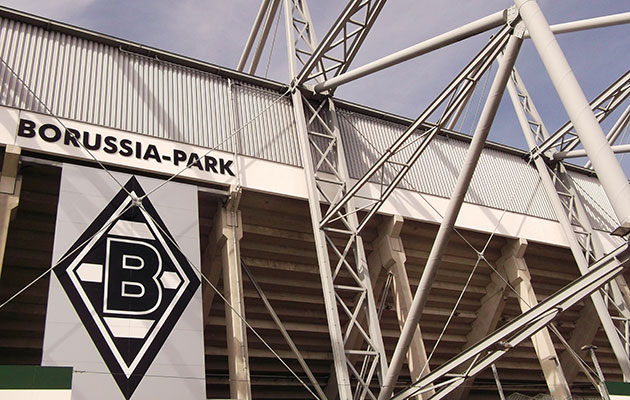 With home fans in the Nordkurve and away ones allocated seated and standing places in sectors 6 and 7 of the Sudkurve, Borussia-Park features one of Germany’s finest stadium bars in the Westtribune. Beyond are training pitches and, on Hennes-Weisweiler-Allee, a display of fan name plaques, each in the famous diamond shape of the club badge.

On match days, from Europaplatz outside Monchengladbach station, a special service of bus line 017 runs to the stadium, journey time 15mins. Alternatively, on Platz der Republik on the other side of the station, shuttle buses run every 5mins, from 3hrs before kick-off to 2hrs afterwards. Public transport is free for ticket holders.

On non-match days, bus No.017 (every 20mins) takes just over 20mins to reach the Borussia-Park stop from the station, or bus No.014 from Rheydt station also goes via Borussia-Park to the town centre. 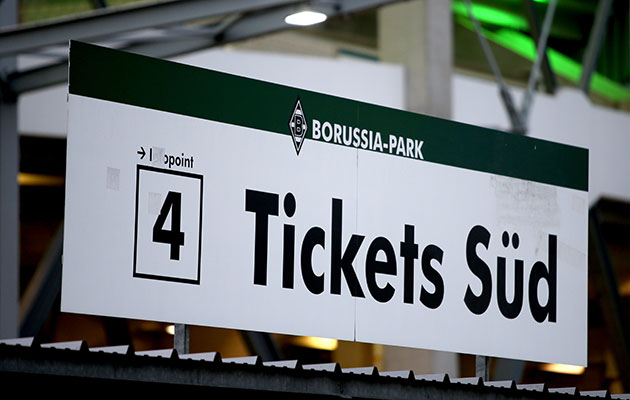 Tickets can be purchased after registering online. The most expensive seats are the Zentral ones (€44.50) in the West- or Osttribune over the halfway line, with those nearer the goals at €35.50-€33. The upper tier at each end costs €27.50-€30.50, including the away sector 7 in the south-east corner. Away standing is €14.50 in sector 6. A supplement is added for bigger matches. Tickets are also sold at Desk 1 in borussia der Shop (Mon-Fri 10am-7pm, Sat 10am-4pm) in the Westtribune, and two other outlets, including the Marienhof (Wallstraße 16/Viersener Straße, same opening hours). There are also ticket offices around the ground, Sud, Ost and Nord-West. 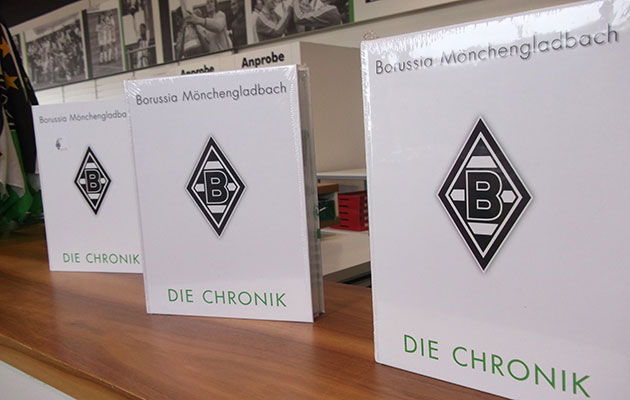 Borussia der Shop in the Westtribune is done out with the same archive black-and-white photos as the Sportsbar next door. Club mascot Junter the foal features on the child-friendly merchandise. Adults may prefer a bottle of Borussia wine or the illustrated history of the club, ‘Die Chronik’. 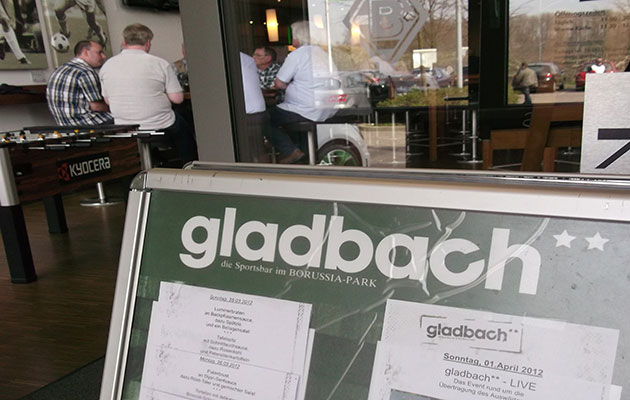 Also in the Westtribune, gladbach** – die Sportsbar (daily except match days 11am-8pm) displays Netzer-era match posters as advertising pillars and large black-and-white images on the walls. Note the shot of Borussia players lifting the league trophy, Netzer looking askance as if he were having a really bad day at the office. 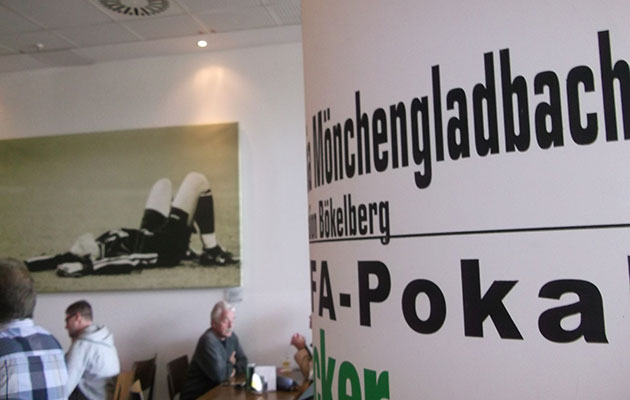 On match days, the Sportsbar is VIP-only. The FanHaus operates for home and away games across main Gladbacher Straße, through greenery on Dahlener Heide. Gallons of Diebels Alt and Jever are sunk in this large beerhall, the former Ayrshire barracks now with Borussia scarves lined along the ceiling.