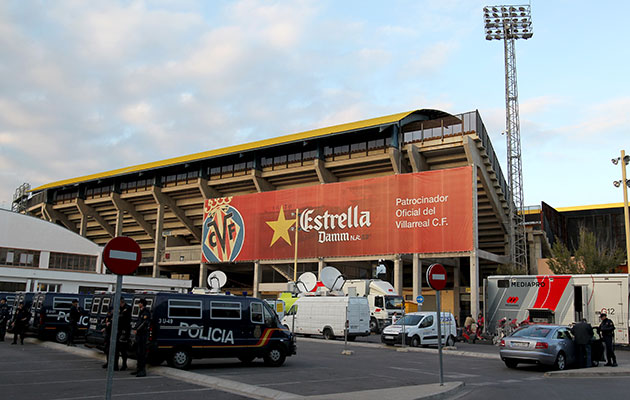 Vila-real is one of 150 soccer cities featured in Libero, the digital travel guide for football fans. Regularly refreshed with new destinations and travelogues, Libero is a one-click treasure trove of football trip tips, tales and trivia. See www.liberoguide.com/vila-real/

The modest community of Vila-real, just up the coast from Valencia, would have remained an unnoticed dot on the map but for two things: ceramic tiles and local football club Villarreal CF.

One of Spain’s most successful clubs of the last ten years, Villarreal CF represent a community less than twice the capacity of their modest El Madrigal stadium.

The club’s recent 90th anniversary coincided with jubilant promotion celebrations, the ‘Yellow Submarine’ having bounced back to the top flight after a brief but dramatic season in the Segunda.

Players had left in droves, while the coach charged with leading Villarreal back up to the top flight, Manuel Preciado Rebolledo, died of a heart attack the very day he was hired. Given the circumstances, Villarreal’s clamber to a promotion place in 2013 must be seen as an achievement as impressive as the club’s three European semi-final appearances in previous years. 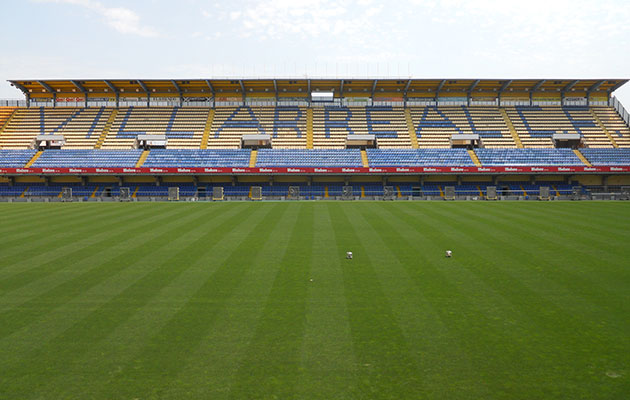 Founded in 1923, Villarreal originally played in white shirts before changing to their signature yellow after the Spanish Civil War. Based at El Madrigal the entire time, Villarreal spent 75 years in the lower reaches before an unlikely promotion in 1998.

The jump coincided with the arrival of Fernando Roig Alfonso as president, who poured money earned from the lucrative local ceramics industry into the club.

The players he hired to get Villarreal to three European semi-finals would have graced almost any team in Europe: Diego Forlan, Juan Riquelme, Sonny Anderson, Pepe Reina, Robert Pires, to name but five. Stalwart Marcos Senna, a Euro 2008 winner with Spain, made 300 appearances for the club before his 2013 move to New York Cosmos.

Between 2004 and 2011, the club didn’t finish lower than eighth, even making a runners-up spot in 2008. Behind this phenomenal performance was Chilean manager Manuel Pellegrini, taking this little-known club to the heights of the European game for his first job outside South America. Here he made his name as one of the best coaches in the business, and it took a considerable buy-out payment from Real Madrid to wrest him from El Madrigal in 2009.

Memorable European nights included a wins over Roma and Celtic en route to a narrow defeat by local rivals Valencia in the UEFA Cup semi-final of 2004, a win over Middlesbrough the next season, and two wins over Everton for a debut appearance in the Champions League of 2005-06. 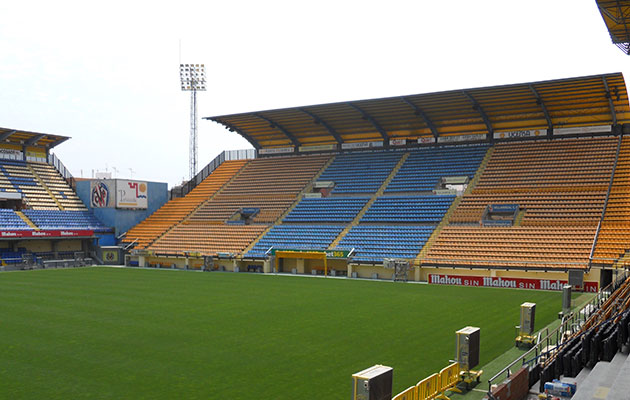 A defeat-free supremacy of their group, in which Manchester United finished bottom, allowed Villarreal to get past both Rangers and Internazionale on away goals. It took a late penalty save from Jens Lehmann at El Madrigal to prevent a semi-final clash with Arsenal going to extra-time. The culprit was the otherwise impeccable Riquelme.

Now firmly established back in the top flight, Villarreal are looking at a return to Europe in 2016-17 – as are local rivals Valencia, now under manager Gary Neville.

Inaugurated the same year as Villarreal’s foundation, El Madrigal has seen seven decades of regional football, fewer than ten years of lower-flight soccer and more than ten of top-class action in its 90 years of service.

With a capacity of less than 25,000, El Madrigal always been one of the smallest grounds in La Liga. Modernised for top-flight football in the late 1990s and for Champions League matches in 2005 – including a complete tiling of the façade courtesy the president’s own company – the ground is one of a dying breed of downtown stadia. Surrounded by bars and shops, it goes against the trend for mall-like arenas on city outskirts. 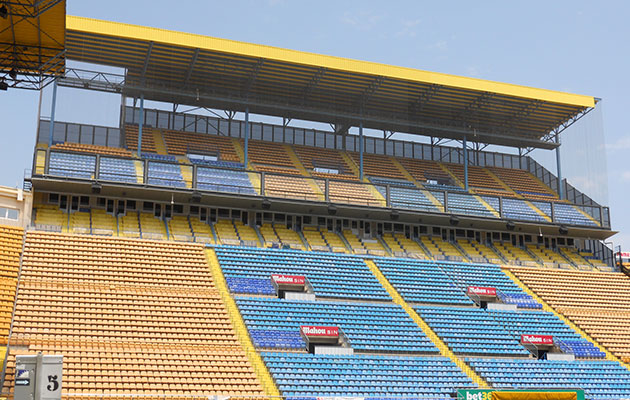 Decked out in yellow and blue, the stadium comprises four compact stands, away fans allocated the top tier of the Fondo Norte behind the goal beside Carrer Moli Bisbal. The home faithful gather in the Fondo Sur, the top half covered, alongside the Placa del Llaurador.

The main Tribuna Central on Carrer Blasco Ibanez contains the press and VIP areas, opposite the Preferencia on Carrer Benicàssim.

From Vila-real station, you can either take a taxi of less than €10 or walk the 15min, straight up Passeig de l’Estacio, turning right at some point for three blocks, and then straight up in the same direction.

The main ticket offices (Mon-Fri 10am-2pm, 5pm-8pm, Sat 10am-1.30pm, 2hrs before kick-off) are on the corner of Carrer Blasco Ibanez and Placa del Llaurador. There are also online sales here.

With nearly 20,000 season-ticket holders for 2013-14, availability is now very limited, though you should be able to find higher-priced seats (€70 and up) in the main stands.

The Botiga Villarreal CF shop (Mon-Fri 10am-1.30pm, 5pm-8pm, Sat 10am-1.30pm, 2hrs before kick-off) is by the ticket offices on Carrer Blasco Ibanez and sells items such as yellow submarines and 90th anniversary scarves.

El Madrigal is surrounded by bars, particularly along Carrer Blasco Ibanez and Carrer Ermita. Opposite the VIP entrance, La Tribuna is a must, a two-room beer hall with club history on the walls and scarved evidence of visits by Middlesbrough and other teams. Note the photos of fans celebrating promotion from the third division in May 1970. The grittier Bar Deportivo (Blasco Ibanez 3) is in similar vein. 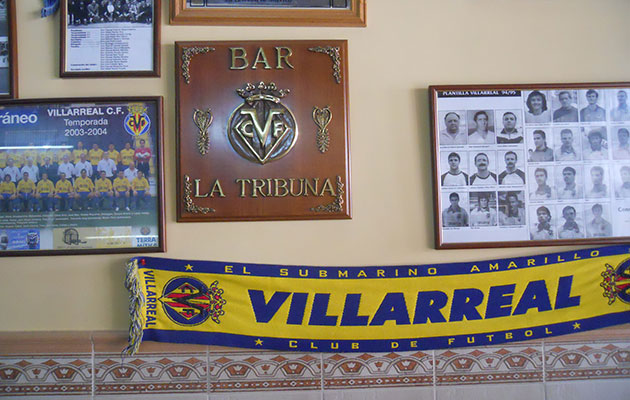 On Ermita, El Madrigal (No.197) is a friendly spot with tapas; Los Manos (No.187) specialises in Spanish hams and traditional meat dishes. The rustic Rincon Madrigal (No.177) has tables outside and serves horchata, a Valenciano drink made from nuts. Milagros (No.165) displays scarves and old VCF line-ups. Ermita bars also have canopied tables over the road, in front of the stadium. 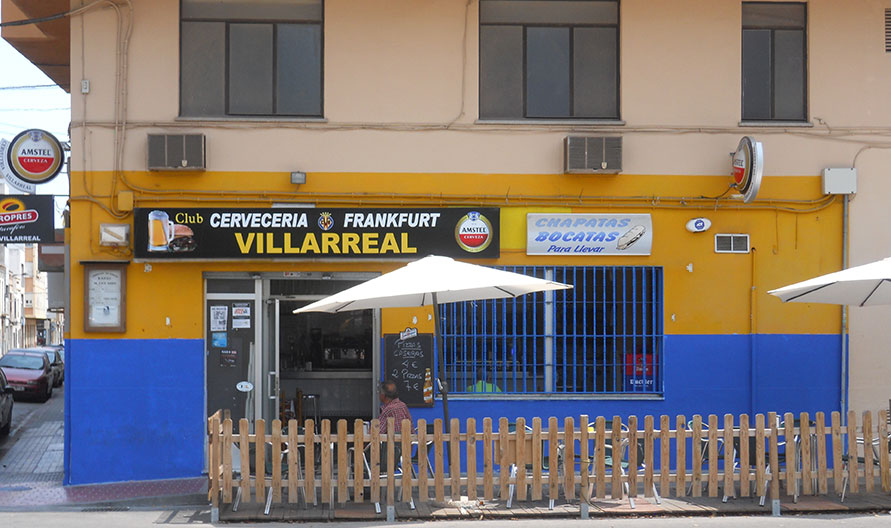 Placa del Llaurador is also lined with bars, including the Cerveceria Villarreal (No.17), open from very early doors, with a photo of the first Villarreal line-up and an older, down-at-heel clientele.