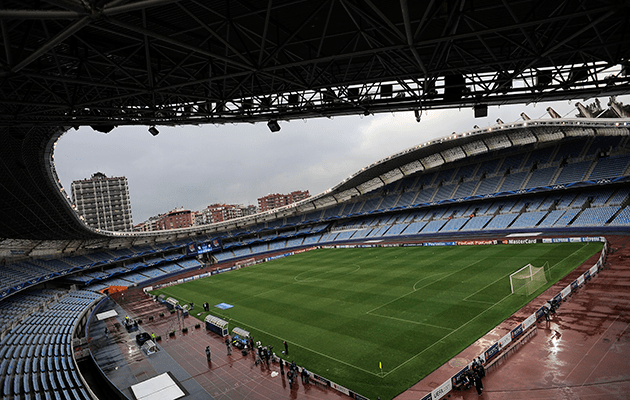 San Sebastian is one of 200 soccer cities featured in Libero, the digital travel guide for football fans. Regularly refreshed with new destinations and travelogues, Libero is a one-click treasure trove of football trip tips, tales and trivia. See www.liberoguide.com/san-sebastian/. 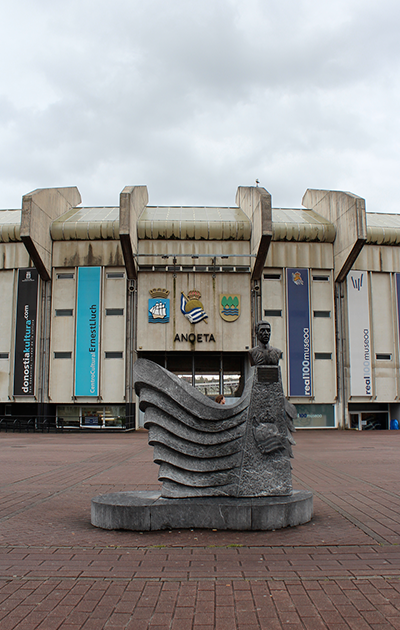 Close to the French border, San Sebastian, Donostia to proud Basque-speaking locals, is a gracious seaside resort and contemporary gastronomic mecca where royals and high society mingled a century ago. Support for flagship club Real Sociedad isn’t quite as feverish as at rivals Bilbao, and the stadium isn’t as cherished, nor as centrally located.

Like Bilbao, San Sebastian has been sport mad ever since it was first organised locally. The Basque Country is the cradle of Spanish football, linked with industrialisation and the British influence in the late 1800s. English engineers brought football to Bilbao, while another trend was for sons of wealthy local industrialists and merchants to gain their education in England and bring the new game of football back home – as was the case in San Sebastian in the early 1900s.

Players who had won the Spanish Cup for ‘Club Ciclista San Sebastian’ in 1909 – the first two goals coming from Englishmen McGuinness and Simmons – were formed into La Sociedad de Foot-Ball de San Sebastian that September.

The club first played on the beaches of Ondarreta before moving to a modest ground by the railway station, Atotxa, in 1913. Inaugurated with a game against Athletic Bilbao on October 4 – in honour of mourned ex-captain Jose Berraondo – this unusual, intimate ground staged 80 years of football. Most famously, it saw the last-gasp title win over Bilbao in 1982, before its curtain closer against a Basque XI a decade or so later.

Squeezed between the fruit market and the factory that lent each end its nickname, the Atotxa was the classic atmospheric anachronism in the city centre.

With 27,000 fans squeezed up to the touchline, it was here that captain Inaxio Kortabarria walked out brandishing the Basque flag with his Bilbao counterpart Jose Iribar in 1976, and here that Kortabarria led two successful league campaigns five years later.

The Basque derby has always been a display of regional solidarity against Spanish rule – amid low-key animosity between the two clubs involved. Basque football’s heyday came after Franco’s death.

In September 1989, the day after scoring for Liverpool at Anfield, prolific goalscorer John Aldridge signed for Sociedad, breaking the club’s non-Basque policy. His successful first season encouraged Dalian Atkinson to follow him. European success, though, eluded Sociedad. Some attribute the decline to the move from the intimate Atxoxa Stadium out to the Anoeta. 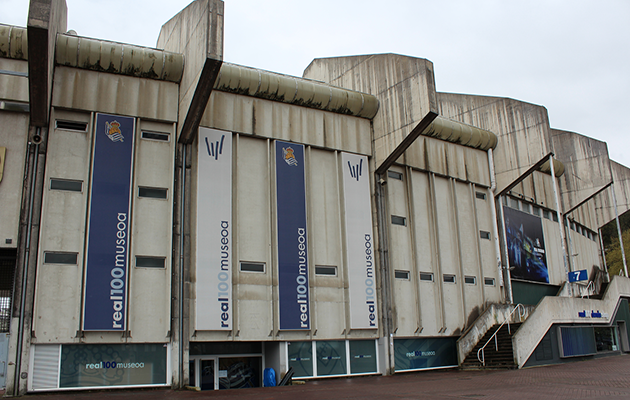 The Anoeta is the modern-day centrepiece of a sports complex built in an equally new suburb of town, Amara Nuevo, south of a bend in the Urumea by the outer ring road. A 32,000 all-seater, the Anoeta was inaugurated in August 1993.

Another foreign striker, Darko Kovacevic, led Sociedad in their next memorable league campaign, the third-place finish of 1998. Linking with Nihat Kahveci and young attacking midfielder Xabi Alonso, in 2002-03 Kovacevic helped Sociedad to a convincing title challenge. This time, it was Real Madrid who stole in on the last day. 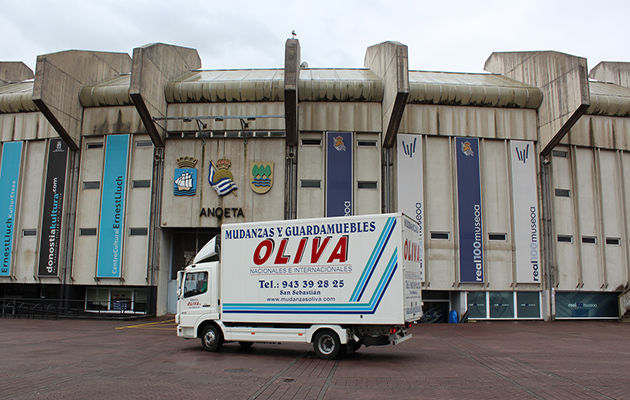 Despite a creditable debut in the Champions League, losing to Lyon after the group stage, Sociedad then dropped back, selling Alonso to Liverpool.

Later, players such as forward Antoine Griezmann and keeper Claudio Bravo impressed enough to be sold on in the close season. But this allowed the likes of David Zurutuza to shine, most notably for his man-of-the-match performance for Sociedad to reverse a 0-2 scoreline and beat Real Madrid 4-2 early in the 2014-15 campaign.

Under David Moyes, Sociedad scored a memorable 1-0 win over Barcelona – only for Moyes to be replaced by Eusebio Sacristan. 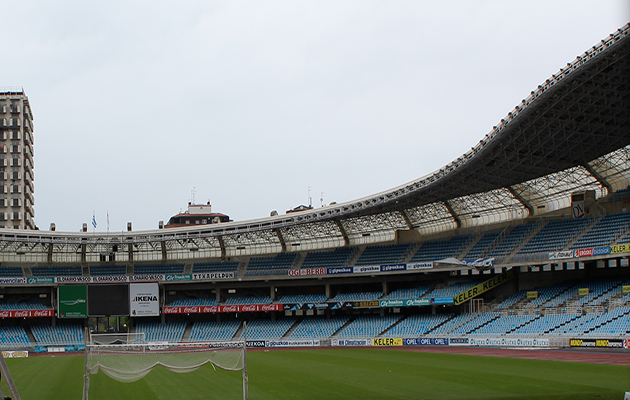 With a running track between stands and pitch – its opening event was the European Junior Athletics Championships – the Anoeta is also used for rugby and rock concerts.

Beneath its undulating roofs, home fans gather in the Fondo Sur, with the Fondo Norte behind the opposite goal also divided into Alta and Baja with an Entreplanta divided Upper and Lower.

The main stand, Principal, sits opposite the other sideline stand, Este. Away fans access their allocated section in the Fondo Norte via gate 9.

Anoeta has its own station on the local train line, one stop from Amara-Donostia station 3min away. Trains run every 15mins.

Several buses run from downtown San Martín 25 to the Anoeta. These include No.21 and No.26 (every 15-20min, six/eight stops) and the more frequent No.28 (eight stops). The No.17 runs from the Estación del Norte (Iparreko Geltokia) seven stops, via focal Plaza Bilbao, to Madrid 17, the nearest stop to the Anoeta.

As well as the ticket offices (before match days Fri 4pm-7pm, Sat/Sun 11am-1pm, from 5.30pm) at the stadium, the club distributes tickets through a handful of bars in the region, including three downtown – Adarra (Zabaleta Kalea 5), Antonio (Bergara Kalea 3) and Casa Bartolo (Fermín Calbetón Kalea 38) – as well as online. 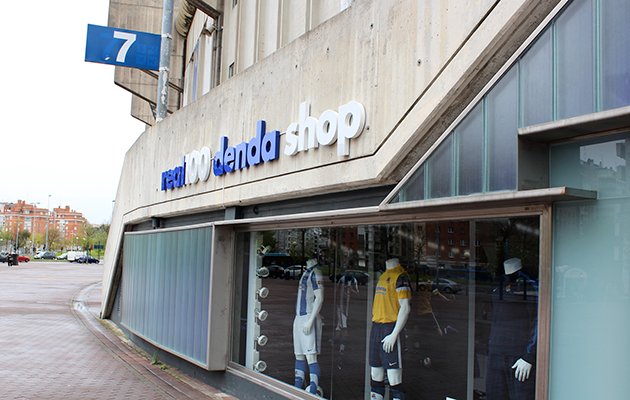 On offer are match-day scarfs for the current Champions League campaign (€18), branded umbrellas for the unpredictable Basque weather (€29-€36) and models of the much-loved old Atotxa Stadium (€29). 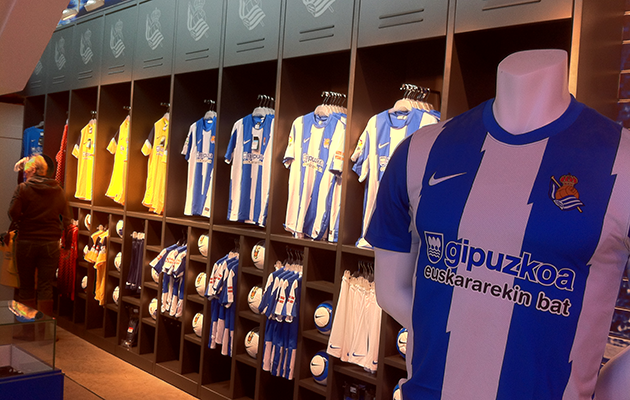 A fan zone of old tickets, photos and souvenirs is constantly being added to, while the supporters themselves form part of a huge mosaic of portraits from different eras. There’s also a trophy room.

Bars lined the main avenue, De Madrid Hiribidea, that runs from Pio XII Plaza towards the stadium. Bar Maite (No.30) is attached to the Pensión of the same name while La Venta de Curro (No.34) is known for its pintxos. Bar Sacha (No.30) is small, simple and unpretentious.

Lorea (No.21) proffers the post-barhop favourite of chocolate y churros, long thin doughnuts and hot chocolate, but doubles up as a decent bar, too. On the corner of the street that crosses Madrid, De Isabel II Hiribidea, the Pata Negra (No.15) is a typical, traditional Basque bar/restaurant.