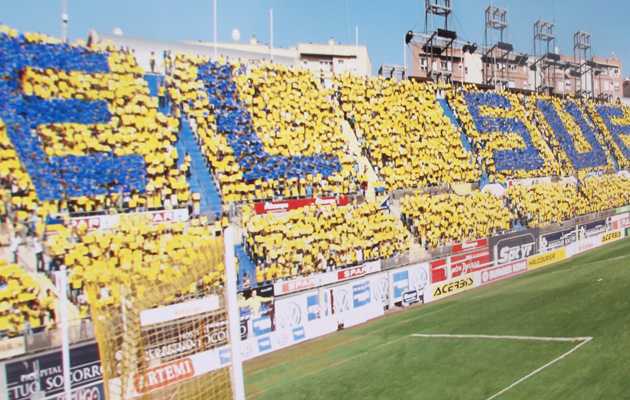 Las Palmas is one of 175 soccer cities featured in Libero, the digital travel guide for football fans. Regularly refreshed with new destinations and travelogues, Libero is a one-click treasure trove of football trip tips, tales and trivia. See www.liberoguide.com/laspalmas/

Las Palmas play at the out-of-town commercial zone of 7 Palmas, at the Estadio Gran Canaria. The largest sports venue in the Canary Islands opened in 2003, exactly one year after Las Palmas were relegated, the start of 13 long seasons in the wilderness.

In May 2015, a new park was unveiled in the city centre. Set within the original walls of the old stadium of the same name, Parque del Estadio Insular pays homage to the city’s flagship football club. 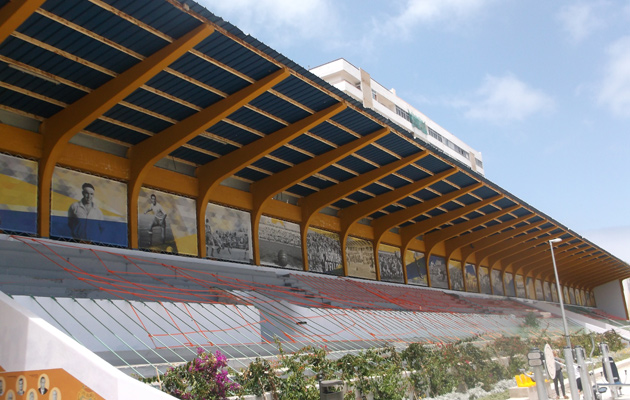 Canary-yellow images of memorable moments, great players and influential managers surround 6,000 square metres of finely manicured lawn and 48 types of plant, flower and palm-tree. While on match days the fans of Leicester City and St Mirren still pass a patch of long overgrown wasteland where their grounds once were, beside new stadiums, so the loyal hinchas of Las Palmas can enjoy the benefits of their former home, a themed recreation park, every day.

This is not only a park but a museum, preserving the history of the club that dates back to 1949.

In June 2015, Las Palmas proved that they were still very much a living concern. On mid-summer’s night, trailing 3-1 from the first leg, Los Amarillos achieved an unexpected play-off win over Zaragoza to return to the top flight.

In August, the day before the opening home match of the 2015-16 campaign against Levante, the city council, club officials, fans and famous old players gathered in the much-loved downtown stadium for a special ceremony in the converted park.

As distant from Madrid as the Spanish capital is from Birmingham, Las Palmas was a regular if exotic fixture in the top flight for most of the post-war period. Here, way down the Atlantic, on the same latitude as where the southern border of Morocco touches close to Mauritania, football developed separately to the Spanish mainland.

Soon other teams sprang up, most notably Marino FC in 1905 and Sporting Club Victoria in 1910. Formed by Anglophile Pepe Concalves, Victoria were named after the queen he revered and bore the same colours, black-and-white stripes, as the club he used to watch when he was a student there, Newcastle. Marino, in blue and white, were Victoria’s great rivals.

While Victoria won the first two Canary Island Championship in 1912 and 1913, Marino triumphed in 1917. In between came Sporting Tenerife, forerunners of CD Tenerife, regional rivals of today’s Las Palmas.

By the 1940s, the championship was monopolised by Victoria and Marino, who had built a new stadium in the town centre. Still referred to by older locals as the Campo del Marino, the Estadio Insular was opened on Christmas Day, 1944.

Founded in 1949 and based at the Estadio Insular, UD Las Palmas would reach the top flight two years later, staying there, pretty much, until 1988.

Regular European competitors, league runners-up in 1969 and cup finalists in 1978, Las Palmas were then a force to be reckoned with, their old stadium also hosting Spain in four full internationals.

Whether the Yellows’ recent accession represents a new dawn for Canarian football remains to be seen. At least Las Palmas provides the adventurous travelling fan with a beach break to go with La Liga action. 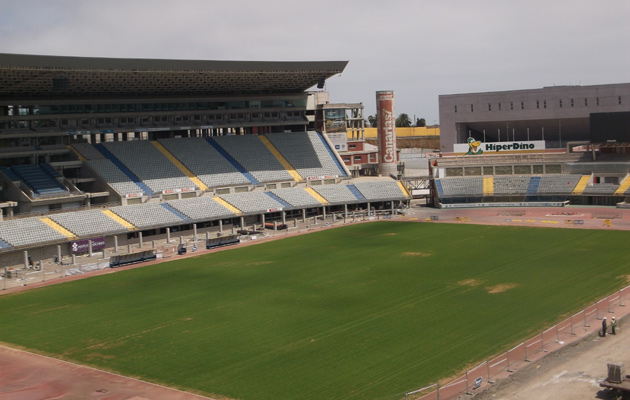 Improvements have been made to make the new arena more football-friendly. Little could have been done about its location, some 5km south of town – but the major overhaul, initiated in November 2014 and accelerated after promotion in June 2015, has made a huge difference to the match-day experience here.

Most significantly, the running track has been removed and many spectators shifted three metres closer to the action. Lines of vision are also clearer and capacity now touches 32,000 thanks to expansion continuing through the autumn of 2015.

The stadium retains its oval shape, with a long half-moon of seating behind the west goal, the Curva, facing a stunted section at the opposite end, the cheapest seats in the one-tier Naciente. Neutrals may be best placed in the sideline Sur, with the best seats in the Tribuna.

The only ones to suffer in the recent remodelling are away supporters. Already having to fork out for a long flight and probably a hotel, these fans were allocated the most expensive (€60) seats in the Tribuna during the first half of 2015-16, Las Palmas management caught on the hop by their club’s surprise promotion and the demands of top-flight football.

In time, away supporters are to be allocated the Naciente – but not quite yet.

Estadio Gran Canaria is uncomfortably far from the centre of the town it serves. Walking here would be impossible, not least because part of the route is by motorway.

From the downtown transport hub of Santa Catalina, by the ticket office, bus No.44 (destination Isla Perdida) runs every 25min (Sun 45min) and takes around 20-25min to reach the stadium area. The last bus back on Sat is 10pm, on Sun 9.45pm. The less frequent No.26 also runs between Santa Catalina and Siete Palmas by a different route – and runs back to town later.

Buses stop at Pintor Felo Monzon (Hipercor), by the roundabout and mall, near convivial bars – the stadium is a short walk across some scrubland close by. You’ll see the floodlights. The stop Hoya de La Gallina is slightly closer but depressingly set amid mall buildings.

With increased capacity at the Estadio Gran Canaria, is rarely a problem. Tickets go on sale during the week before the game at the stadium taquillas (10am-2pm, 4.30pm-8pm) by the main car park. There are also a few outlets in town, including the Cafeteria Pecallanía at Calle Harimaguadas 24 and at the Bazar Nacho store just behind the old Estadio Insular at Calle Graciliano Afonso 7. 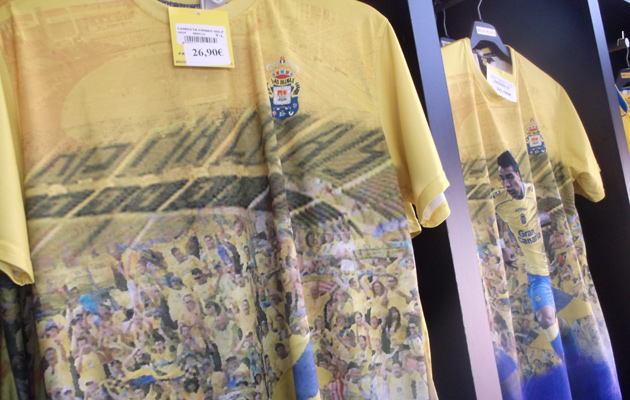 Set just inside the gate by the taquillas, the club shop is awash with yellow, blue and… pink, the team’s second kit. Beachwear is a prominent feature – flip-flops, towels – and Spanish readers interested in club history can pick up a copy of ‘El Maestro’, the biography of midfield hero German Devora. 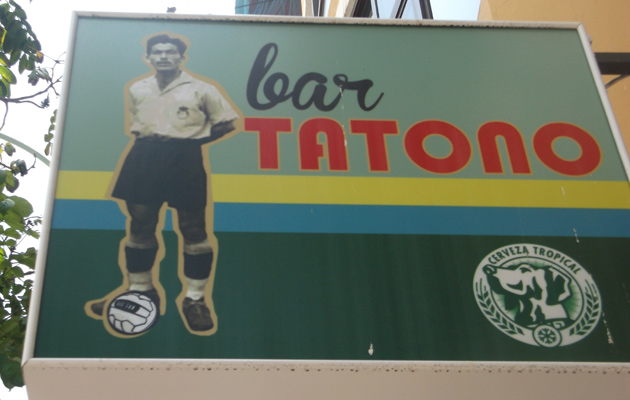 If you’re visiting the Parque del Estadio Insular, the nearby Bar Tatono on Calle del Mas de Gaminde is named after and dedicated to the Las Palmas player who used to run it. A handsome chap who featured in the groundbreaking promotion-winning team of 1951, depicted in one of dozens of archive line-up photos embellishing this little jewel of a place, Tatono left the bar to his son. 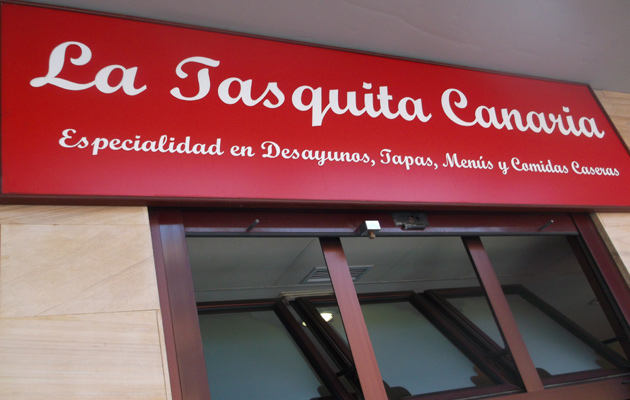 Near the new stadium, alighting at the Siete Palmas mall, you are welcomed by bland cafés. Avoid these and head over the roundabout, straight for friendly, local La Tasquita Canaria on Calle Hoya de La Gallina, where rustic images of yesteryear complement Canarian tapas and Tropical beer. 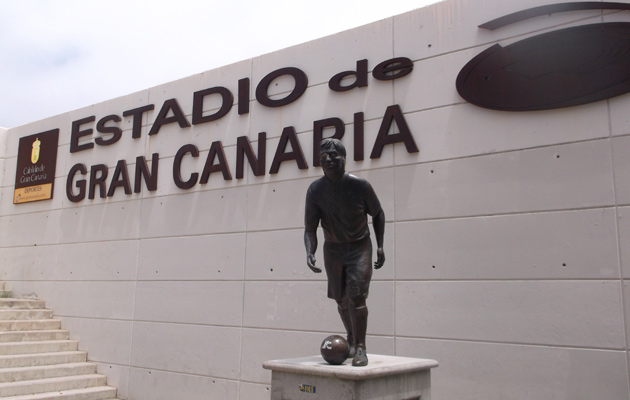 By the stadium, there’s a line of venues on Calle Fondos de Segura, facing the statue to the club’s cantera, the young players who have come through the ranks. Best of them is probably homely Ca Jorge (No.17B), a good place to enquire about tickets if you haven’t got one. Alongside, the Restaurante Basilio is another traditional spot, with a wooden interior and Las Palmas iconography dotted around. Other choices include homely El Rincon de Willy (No.21), which has a fast-food outlet, Willy Junior, nearby.