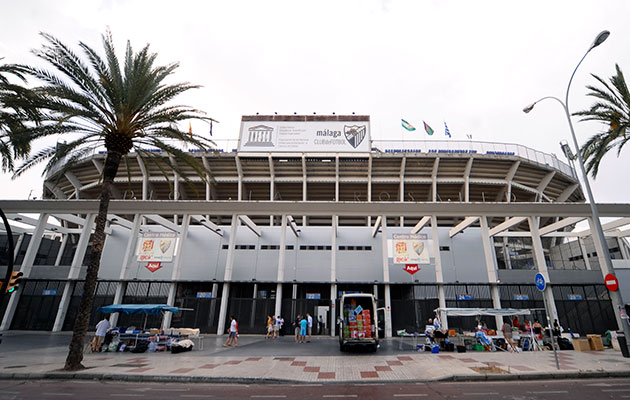 Malaga is one of 150 soccer cities featured in Libero, the digital travel guide for football fans. Regularly refreshed with new destinations and travelogues, Libero is a one-click treasure trove of football trip tips, tales and trivia. See www.liberoguide.com/malaga/. 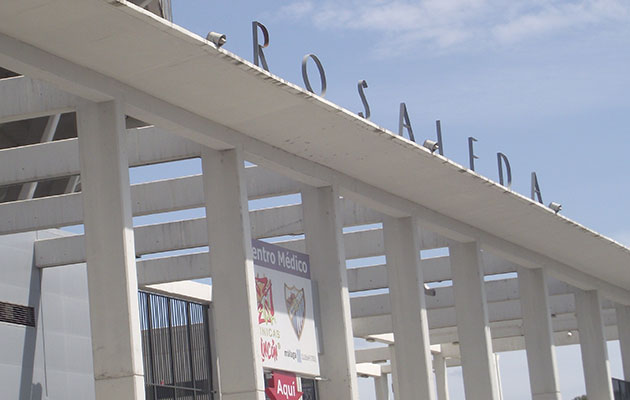 Moneyed, erratic Malaga Club de Futbol have been looking to usurp Sevilla and Betis as the main club in Andalucia, even take on Atletico Madrid and Valencia as the main challengers to Spain’s big two.

These lofty ambitions seemed pretty hollow when the club was refused entry to the Europa League 2013-14 due to financial irregularities – their place taken by Betis. Only months before, Malaga had come bitterly close to spot in the Champions League semi-final, two overtime goals by Borussia Dortmund sealing the tie.

The story of football in Malaga, principal city on Spain’s sunny, moneyed Costa del Sol, has not always been a happy or simple one. The current set-up is equally opaque. Backed by Qatari money since 2010, Malaga CF achieved a fourth-placed finish in 2012, the highest in the history of Los Boquerones (‘The Anchovies’).

Since then star players have been offloaded with regularity. Despite significant support from the British expat community in nearby Marbella, Malaga CF may yet have to wait a while for another crack at Europe.

The current club came into existence in 1992, when the city’s main Club Deportivo Malaga folded and subsumed their youth team, Club Atletico Malagueno, in the Third Division.

Malagueno had their own historic links to a complex merger in 1933, three decades after the original Malaga FC were formed.

In the early 20th century, there were two main clubs in town: Malaga FC (later Real Malaga FC, later Malaga Sports Club) and FC Malagueno. Both were founding members of the Spanish Third Division in 1929.

The two merged soon afterwards, and became Club Deportivo Malaga with the unveiling of La Rosaleda stadium in 1941. 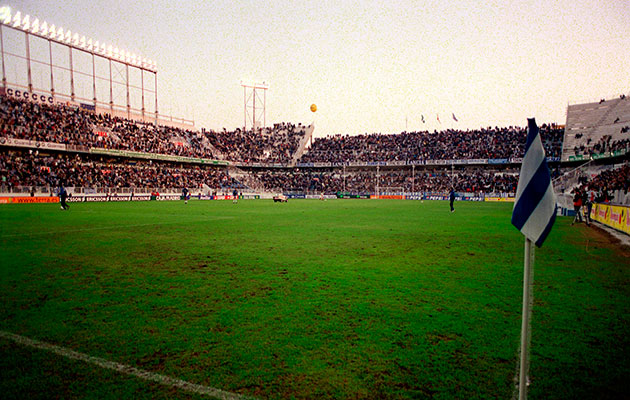 With the huge property developments along this stretch of coast in the 1960s and 1970s, money poured into the area, typified by the jet set hub of Marbella. The opening of nearby marina and tourist complex Puerto Banus in 1970, by the same Siberian architect who had worked in Beverly Hills and Acapulco, took everything to a whole new level.

Serious wealth arrived, as did serious local corruption and drug smuggling from Africa, just over the water. The coast became known as the Costa del Crime, a haven for untouchable villains from the UK, fraudulent real estate and the Russian mafia.

Malaga couldn’t fail to be caught up in it all. Once a sleepy Andalusian backwater that produced Pablo Picasso, the town became an international gateway as its airport expanded. In 1971, the CD Malaga club president was murdered, allegedly by the mafia.

The money that had brought CD Malaga to the top half of the Spanish league slowly dried up. By 1992 it had disappeared completely.

Meanwhile, a new phenomenon appeared, the Brit expat Malaga fan, by no means linked to any criminal element. Based at the Tavern Pub in Marbella, the Pena Internacional Malaguista accounted for nearly 2,000 season-ticket holders at La Rosaleda.

Club backer Sheikh Al-Thani is said to be looking at a multi-million euro development east of Marbella, a five-star rival to Puerto Banus.

Whether he can also change the fortunes of Malaga CF is another matter. 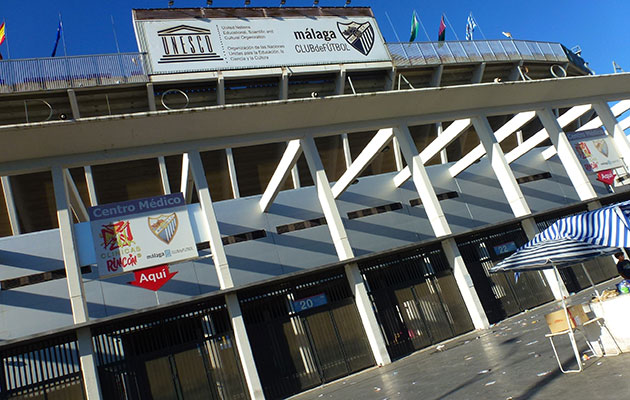 In 1922, the original Malaga club made their first home at the beachside Banos de Carmen, where you’ll find the El Balneario bar today. This remained their base for around a decade, until plans were laid for a new stadium, north of the city centre alongside the narrow Guadalmedina river: La Rosaleda, the ‘Rose Garden’.

From an original capacity of 8,000, La Rosaleda was expanded, most notably when it gained upper tiers for the 1982 World Cup. Scotland’s 5-2 win over New Zealand and fateful 2-2 draw with the USSR were played here.

The stadium had already gained a museum and improved seating in all areas before the arrival of Sheikh Al-Thani, who soon had the VIP and technical areas revamped. 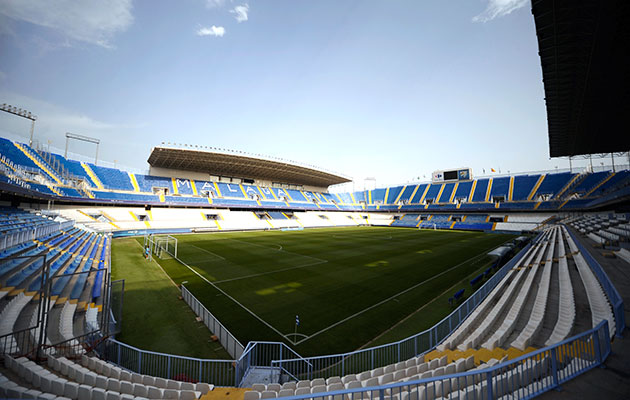 Current capacity is 29,500. Arranged in two tiers, the stadium comprises the Fondos Sur and Norte behind each goal, and Tribuna and Tribuna Presidencial along each sideline.

La Rosaleda is a 20-minute walk along the dried-up Guadalmedina from town. Bus No.15 has a stop at Avenida de la Palmilla/Campo de Futbol but doesn’t go via anywhere downtown. The No.2 runs from focal Alameda Principal to stop just the other side of the river from the stadium at two Jorge Silvela stops at either end of the arena. Here also, the Fray Domingo Pimentel stop is served by Nos.C2, 26 and 30. 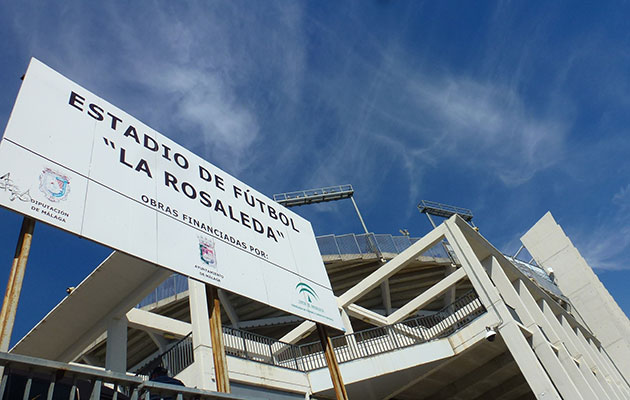 With a relatively modest capacity, tickets at the cheaper end are quite scarce. Most in the €35-€40 bracket in the Fondos behind the goal will probably be snapped up. Seats in the Tribuna along the sideline are priced 1-4 according to view, from €45-€90. The Preferencia is priced at around €60. 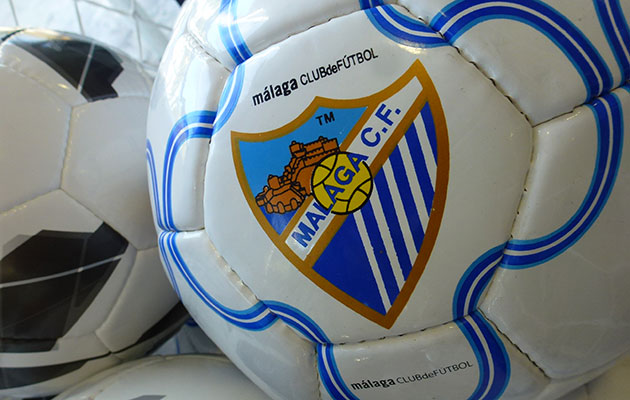 Trophies, a timeline through club history and shirts through the ages in the museum are complemented by visits to the dressing rooms, the dug-out and the stadium itself, part of stadium tours (€8 adults, €4 under-18s) that take place Mon-Wed 10am-7pm, Tue-Sat 3pm-7pm.

Bars and kiosks surround the stadium. In the immediate vicinity, on the south-east corner, you’ll find the Bars Nataly and Rosaleda, as well as a number of mobile bars where fans gather before and after the game. If packed, there are a couple of venues across the river on the approach to the ground, along Calle Actriz Rosario Pino: the Cafeteria Oasis and the Meson Segalerva.