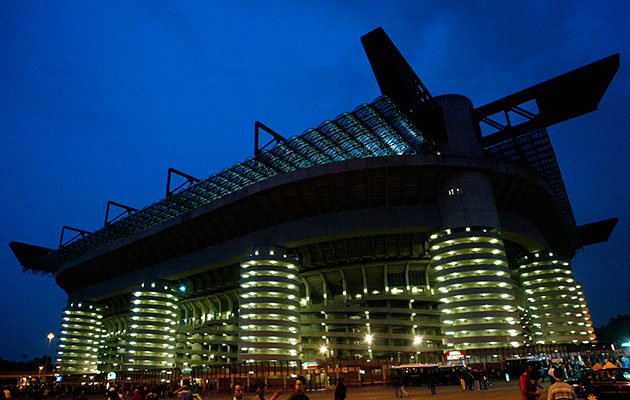 Milan is one of 175 soccer cities featured in Libero, the digital travel guide for football fans. Regularly refreshed with new destinations and travelogues, Libero is a one-click treasure trove of football trip tips, tales and trivia. See www.liberoguide.com/milan/

Arguably European football’s most revered arena, Milan’s San Siro is to host the final of Europe’s premier club trophy for the fourth time of asking.

It may well continue to stage more – but in terms of its equally celebrated shared-stadium cross-city derby, the days for this event are numbered.

When Milan leave the San Siro for their own new-build arena in nearby Portello as planned in 2020, they will close the door on seven decades of a city rivalry based at the largest football stadium in Italy. 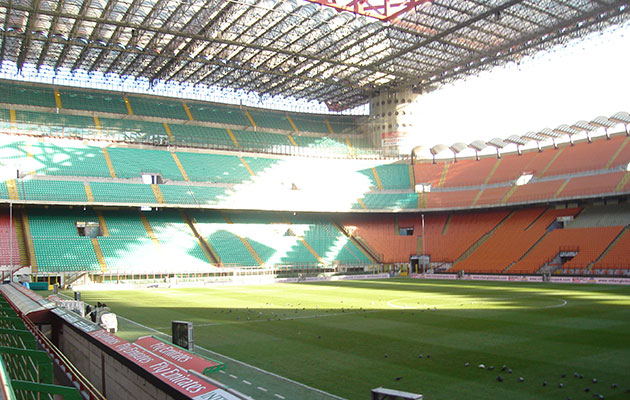 It was Milan, in fact, in the shape of their then president Piero Pirelli, who built the San Siro in the first place, in 1926. Designed specifically for football, it also became the home of their city rivals Internazionale in 1947.

With no running track and with four stands making a rectangular shape around the pitch, despite three major overhauls, the San Siro has not lost its shape, its style or its staying power.

Tyre magnate Pirelli had taken over the Rossoneri of Milan in 1909. As opposed to the other stadia being built across Mussolini’s Italy, Pirelli’s San Siro was laid out like the traditional grounds in England, with the crowd up close – perhaps the influence of Pirelli’s formative years in regular contact with the English founders of his Milan club in 1899.

The rivalry with Inter dates back to 1908. Italian and Swiss members of the Milan club, unhappy with its British influence, broke away to form Internazionale.

The fixture between the two become known as the Derby della Madonnina, in reference to the statue atop the landmark Duomo cathedral that dominates the city centre. Unlike Rome’s Olimpico, with its running track, which city rivals Roma and Lazio currently share, the San Siro is the perfect stage for the big occasion.

Supporters hang over the pitch in steep-sided tiers – you can smell the turf near the touchline. Across town, families, friends and colleagues part ways for match day – the local fan base is a geographic mix.

Milan’s cocktail-drinking image later gave way to a working-class one – their blue-collar followers became known as ‘cacciavite’ or screwdrivers.

Inter attracted high society once oil magnate president Angelo Moratti took over after the war. The San Siro was expanded to accommodate both clubs, the crowd enjoying the legendary 6-5 derby of 1949, the first that Angelo’s son Massimo was taken to.

In 1955, the stadium was revamped, given another tier and its distinctive candy-twist appearance around the outside. Capacity touched six figures, such as the 100,000 squeezed in for the visit – and Italy’s victory over – Brazil in 1956.

By the early 1960s, the San Siro was in its pomp. With Moratti and mercurial coach Helenio Herrera at the helm, Inter matched Milan’s European Cup win of 1963. The Inter icon was Sandro Mazzola, Milan’s Gianna Rivera, and high society gathered for all the big matches. 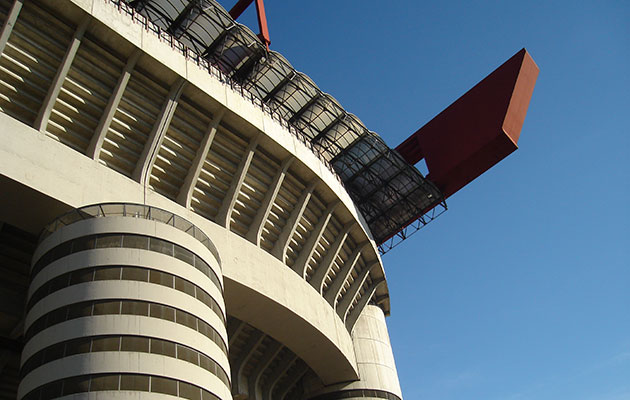 The next golden age came in the run-up to the 1990 World Cup. With Ruud Gullit and key Dutch stars winning European Cups for Berlusconi’s Milan, and soon-to-be world champion Lothar Matthaus leading title-winning Inter, Milan was the centre of the football universe, confirmed by its hosting of the curtain-raiser for Italia ’90.

For the tournament, a plexiglass roof with distinctive red girders was added, as well as a third ring. An all-seated capacity of just over 80,000 remains to this day.

After these two periods of joint Milanese success at home and abroad, Inter’s star faded and an incoming Massimo Moratti, son of Angelo, presided over a decade of humiliation. Silvio Berlusconi’s Milan remained dominant.

When Inter’s chance came to match Milan, the Champions League semi-final of 2003, Inter lost on ‘away’ goals. Tempers frayed amid Interisti in the Curva Nord while Milan’s Curva Sud, the Lion’s Den, celebrated in style. Two years later, the same clash at the same stage ended violently when Milan goalkeeper Dida was felled by a fan’s firework, Milan leading 3-0 on aggregate.

Today, despite the downfall of Berlusconi and Moratti’s sale of Inter to an Indonesian magnate, Milan and the San Siro remain one of Europe’s most alluring football hubs. Until 2020 and almost certainly beyond. 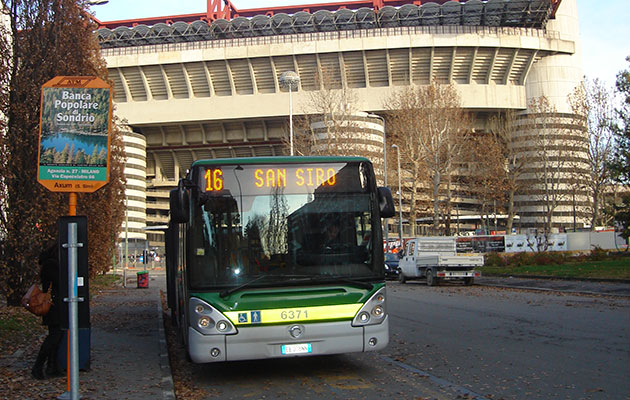 The San Siro now has its own stop on the M5 line, opened for the Expo of 2015. First take M1 metro to Lotto, direct from focal Duomo on the branch that terminates at RHO Fiera – make sure it’s not going to Bisceglie – then change onto the M5 that terminates at San Siro Stadio.

The Biglietteria Nord row of ticket offices faces gate 1. The circular building housing the Biglietteria Sud is near gate 14. There’s another biglietteria by gate 7. To buy tickets, you must show ID. 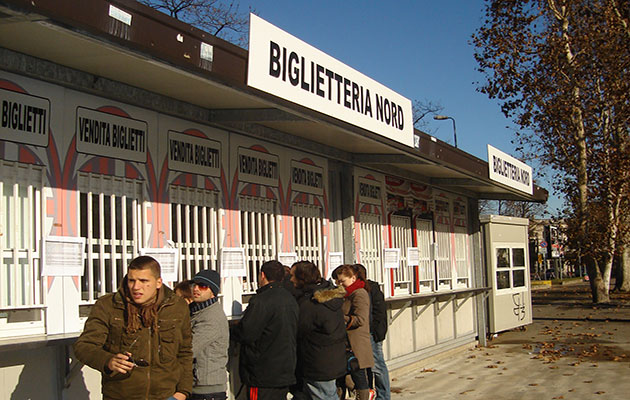 Inter and Milan also have their own separate ticket arrangements.

Tickets and merchandise are available at the Solo Inter store at downtown via Berchet 1A (daily 10.30am-7.30pm). On match days, there’s an Inter souvenir outlet facing gate 7 at the stadium. 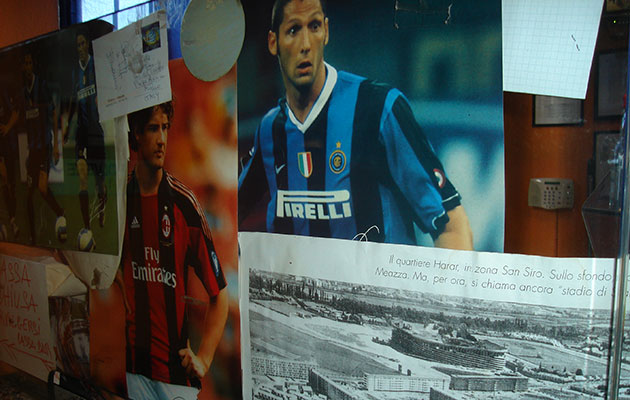 Tickets are not available at Milan stores in town, rather via a number of banks in the Banco Intesa Sanpaolo group, including the Banco di Napoli and Banco di Credito Sardo.

The San Siro is comprised of three rings, 1 anello being closest to the pitch and therefore priciest, 3 anello highest and cheapest. The four sides of the San Siro are colour-coded, blue (blu, AC) and green (verde, Inter) behind each goal, red (rosso) and orange (arancio) along the sidelines. There, a decent seat in the second row is about €40-€50. Pricier Fascia A games are for derbies and Juve visits. Prime spots are €100 and more, rising to €200, even €300. 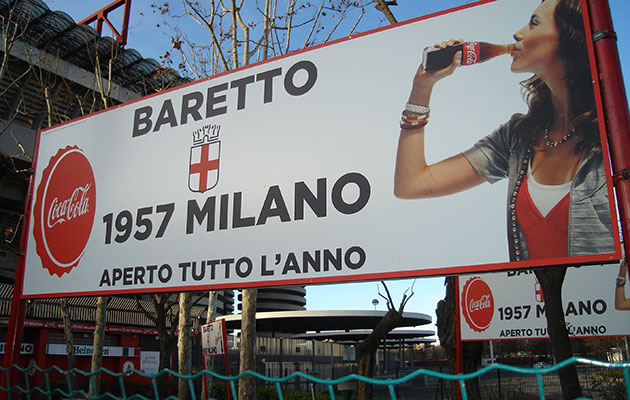 Around the stadium, the best bar option is the Baretto 1957 Milano, popular enough pre-game to sell its own logo’d T-shirts. On the south side, by the round ticket hut, chalet-like Bar-Ristorante Trotto comprises a terrace under a green awning, and a large interior divided bar/restaurant, with Champions League souvenirs. 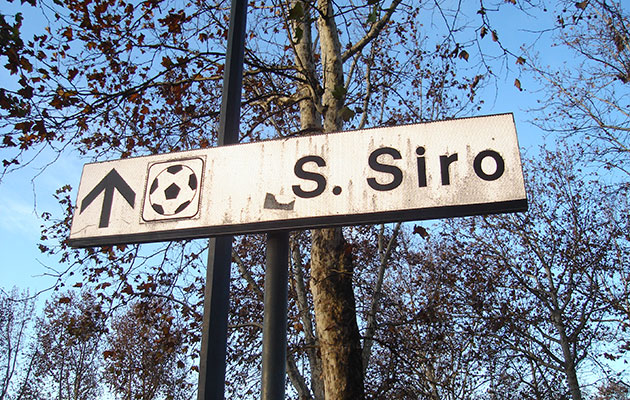