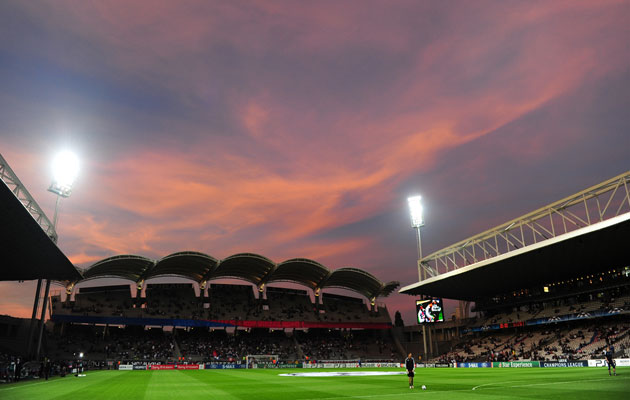 Lyon is one of 125 soccer cities featured in Libero, the digital travel guide for football fans. Regularly refreshed with new destinations and the travelogue Soccer Sagas, Libero is a one-click treasure trove of football trip tips, tales and trivia. See www.liberoguide.com.

The most successful French club side of the new millennium, Olympique Lyonnais have had to take a back seat to Paris St-Germain since winning the French league seven times on the bounce up to 2008.

In the 2014-15 campaign, ‘OL’ led the table for two months but now only stand a mathematical chance of the title.

Still, Lyon are guaranteed Champions League football in 2015-16, and the vision of long-term owner/chairman Jean-Michel Aulas to create a European superpower in the middle of France remains intact.

Essential to this dream is the Parc Olympique Lyonnais, a 45-hectare complex of hotels, leisure attractions, a club megastore and, of course, a new 48,865-capacity stadium to replace the current Stade Gerland. Next summer, the new Parc will be one of ten venues to host Euro 2016, and a semi-final host along with Marseille.

Such a prestigious role reflects the city’s power base halfway between Paris and Marseille. This is, like flagship club OL, a relatively recent phenomenon. In fact, in Lyon’s case, the stadium came before the club. 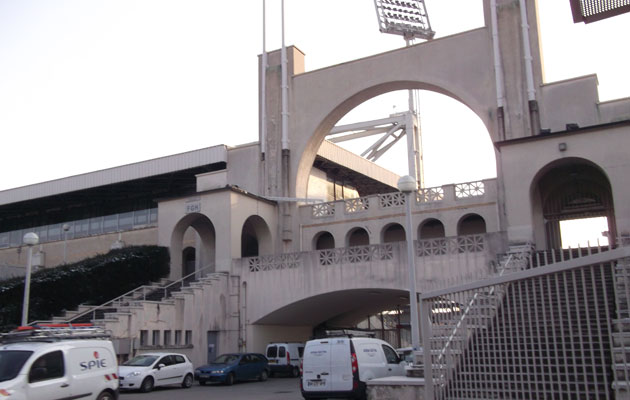 The 40,000-capacity Stade de Gerland was designed along classical lines by Tony Garnier, the famed local architect responsible for other urban projects in the early 1900s. Partly built by German POWs from World War I, the Gerland was inaugurated as a multisports arena in 1920. It featured two large concrete arches at either end, which guarded tracks for running, cycling, and a pitch equally adept at hosting rugby.

The Gerland had been slated to host one game at the 1938 World Cup. Instead, Sweden were allowed a free passage to the next round as their opponents could no longer form a national team. Austria had been swallowed up as part of Nazi Germany three months earlier.

With the foundation of Olympique Lyonnais from an amalgam of local clubs in 1950, and the large crowds for derby games against St-Etienne, the cycle track was removed.

OL spent most of the next 30 years in the top flight, winning the cup three times. Memorable European games included a 4-4 away goals win over Spurs in 1967 and a semi-final appearance in 1964. Key players included Jean Djorkaeff, Nestor Combin and, the hero of the 1960s, Fleury Di Nallo. His successor in the 1970s was the equally bullish Bernard Lacombe. 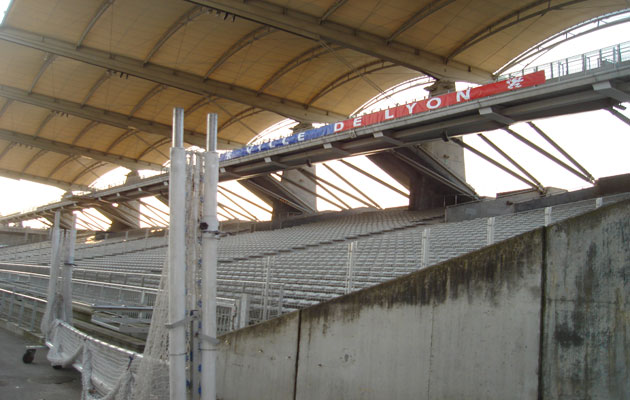 By the 1980s, OL were on the wane. At least the Gerland had an active role for Euro 84, its athletics track removed, and new roofs built to complement Garnier’s arches. For the World Cup 14 years later, the two ends were rebuilt, with roofing and steeper gradients as the Gerland became all-seated.

On the pitch, it took the arrival in 1987 of Aulas to launch ‘OL-Europe’, a plan to push the club back into the limelight – and back into Europe. Promoted in 1989 with Raymond Domenech as coach, OL finished league runners-up in 1995 under Jean Tigana. Goals by Florian Maurice and big-name signing Sonny Anderson saw progress in the UEFA Cup and Champions League.

Lyon picked up the likes of Michael Essien and Florent Malouda cheaply from rival French clubs, got a couple of great seasons out of them before selling them on for a serious profit. A youth academy produced the likes of Karim Benzema and Hatem Ben Arfa. 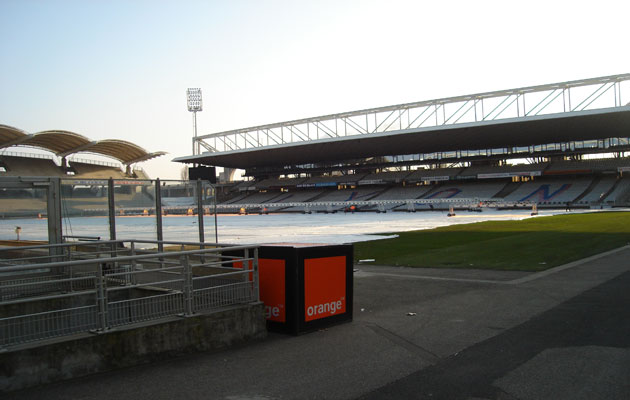 The Gerland paid witness to the phenomenal rise of OL under Jacques Santini in the 2000s, the first of seven league titles and many memorable European nights. As more money poured into the club, so more upscale restaurants were opened at and around the stadium. The stadium will also be remembered as the site of the death of Cameroun midfielder Marc-Vivien Foé, who collapsed in a Confederations Cup semi-final here in 2003.

As for OL, they now dominated the French game. 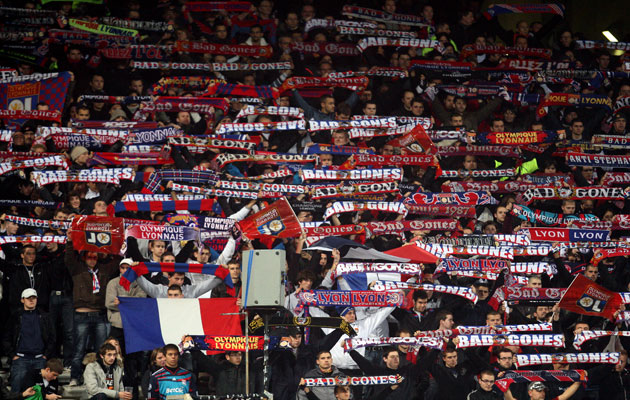 ‘Les Gones’ to their fans, the ‘Bad Gones’, became a popular phenomenon along the lines of Olympique Marseille a decade earlier.

Currently at the Gerland, the Bad Gones create an atmosphere behind the goal in the Kop Virage Nord, while visiting supporters are allocated sections of the Virage Sud, alongside the Lugdunum’s 1993 OL followers. 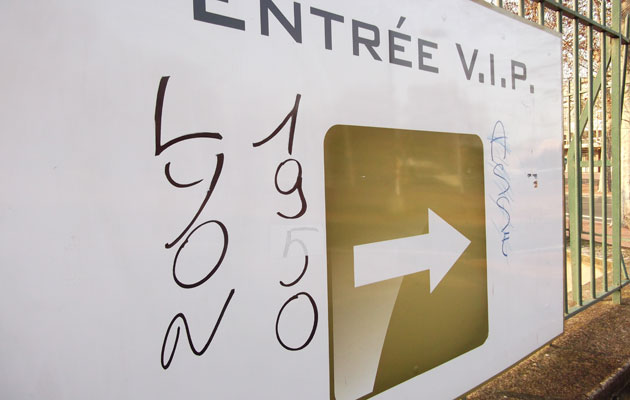 How the allocation works out at the new Parc, set in the suburb of Décines-Charpieu, some 12km east of Lyon, isn’t clear. Also unclear is the future of the Stade Gerland after 2016. Easily accessible from the city centre and surrounded by cafés and quality restaurants, it remains the kind of resource any city of similar size would cry out for. 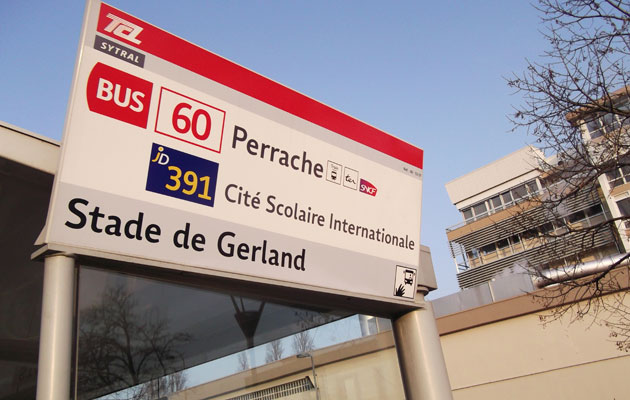 The Gerland has its own stop at the end of metro line B, six stops from Part-Dieu. From the rhônexpress terminal in town, walk through Part-Dieu station to the metro station just outside the building. Alighting at Debourg, one stop closer to town, allows easier access to pre-match bars and restaurants.

The bus stop by Gerland serves the No.60, directly linked with Lyon’s other station, Perrache.

Tickets are sold at the office (Mon-Sat 10am-1pm, 2pm-6.30pm, match day 2pm-half-time) immediately outside the club shop at the Stade Gerland, as well at the OL outlets at Part-Dieu station and St-Exupéry Airport. Only OL card-holders can register on the club website to buy online.

The best seats (€60-€65) are in the Jean-Jaurès Supérieur, with prices around €40-€50 in the Jean-Jaurès Inférieur and the Jean-Bouin stand on the opposite sideline. Tickets are €20-€30 in the two-tier Virages Nord and Sud behind each goal – a section of the Sud is allocated to visitors.

For most French league games, there’s a special price of €6.50 for under-16s.

Note that free copies of OL match newspaper ‘La Tribune’ are distributed through the turnstiles. 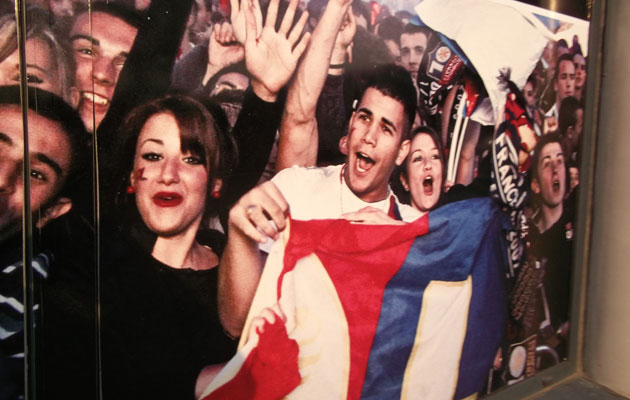 The main stadium store (Mon-Sat 10am-7pm, plus match nights) stands where avenue Tony Garnier meets avenue Jean-Jaurès by the Gerland metro exit. You’ll find OL-branded bottles of Mâcon-Ville and Côtes-de-Rhône wine along with the usual souvenirs and accessories. There’s also a shirt-printing service. Outlets are also located in town at rues Grolée and Jussieu, by Cordeliers metro, and at St-Exupéry Airport. Souvenirs are also sold at the Decouvrir Le Lyonnais shop in Part-Dieu station.

Fitting for the flagship club of the gastronomic capital of France, the gourmand follower of OL is spoilt for choice. First and foremost, L’Argenson under celebrity chef Paul Bocuse, provides upscale home-style cuisine at the corner of allée Pierre de Coubertin and avenue Jean-Jaurès, by the club offices.

Around the ground, bars and restaurants stretch along rue Marcel Mérieux and avenue Jean-Jaurès, on the other side of main avenue Tony Garnier from the stadium, towards Debourg metro station.

There, the classiest option is JOLS a superb fish restaurant set in an old covered market dating back to 1933. Closed on Sundays, the friendly, unpretentious JOLS should have tables free before OL league games but reserve before European nights. 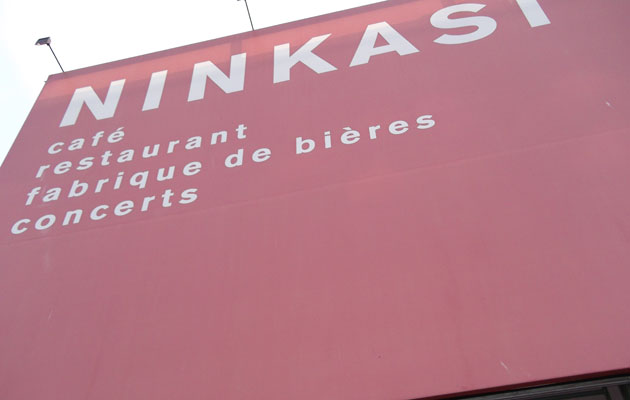 Amid a small hub of bars, the pick of the bunch is the excellent Ninkasi (www.ninkasi.fr) a multi-purpose venue on the lines of Cargo in London, where artisanal beers are sold in jugs and burgers served from a grill hatch in the corner. There are also live bands and DJs perform on a number of stages. Packed on match days, Ninkasi also features a full restaurant upstairs and a beer terrace. 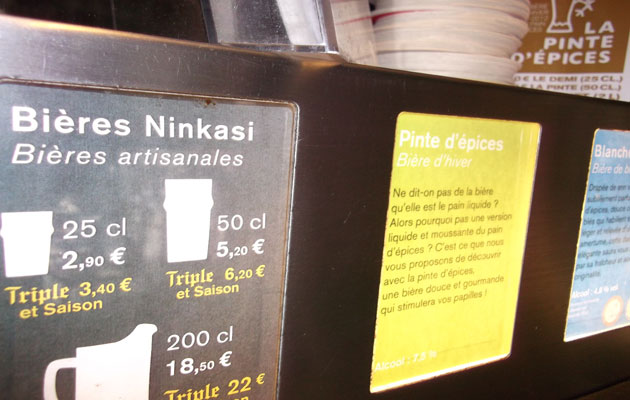