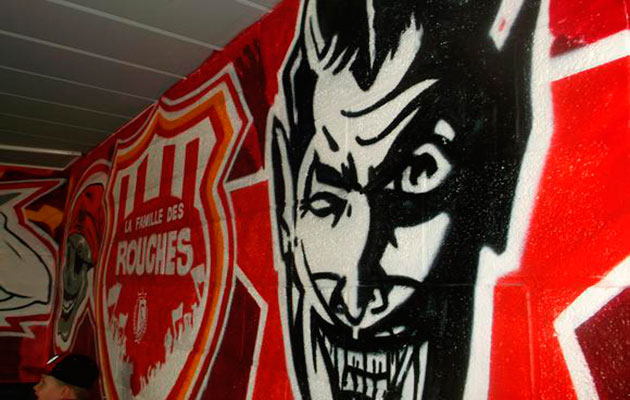 Liege is one of 175 soccer cities featured in Libero, the digital travel guide for football fans. Regularly refreshed with new destinations and travelogues, Libero is a one-click treasure trove of football trip tips, tales and trivia. See www.liberoguide.com/liege/

Ten times champions of Belgium, Standard Liege  are a populist club revered in the industrial heartland of French-speaking Wallonia. 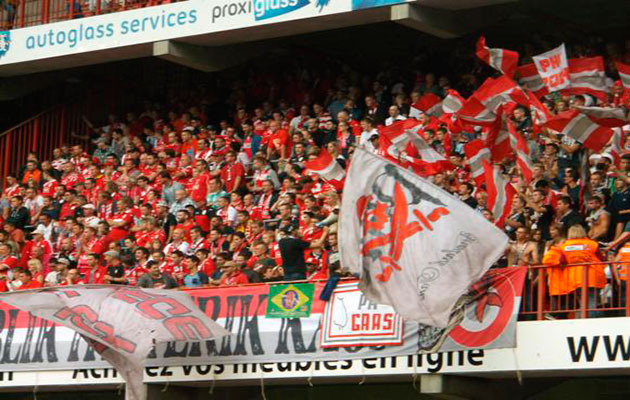 Few clubs look forward to their season’s visit to Sclessin, the grey area of Liege down by the Meuse where Standard are based. There at the Stade de Sclessin, les Rouches (‘les Rouges’ in local dialect, the Reds) run out to a sea of red – and there have Standard have upset a few big European names too.

The stadium, backdropped by the mines that worked here until 1980, is officially called the Stade Maurice Dufrasne, after the chairman who arranged a regular home for the club here after a decade of playing in various parts of Liege.

Standard had been formed in 1898 by local students who wanted to emulate the feats of Standard Athletic Club in Paris, inaugural French football champions in 1894.

However it was city rivals Liege Football Club who won the first Belgian championship – in fact, Standard didn’t win anything until after Dufrasne’s lifetime.

Standard moved to what was Sclessin farmland, overlooked by slagheaps, in 1909. Dufrasne then created a modest stadium here in 1925, shortly after the club gained promotion to the First Division.

Developed from a small single stand as the club found success after the war, the Stade de Sclessin saw its capacity rise to 40,000 by the early 1960s. Standard won a first league title in 1958. By the next in 1961, they were captained by Belgian international Denis Houf and coached by Geza Kalocsay, a globe-trotting Czech-Hungarian who had been involved in two World Cup finals, as a squad player for Czechoslovakia in 1934 and an assistant coach for Hungary in 1954. 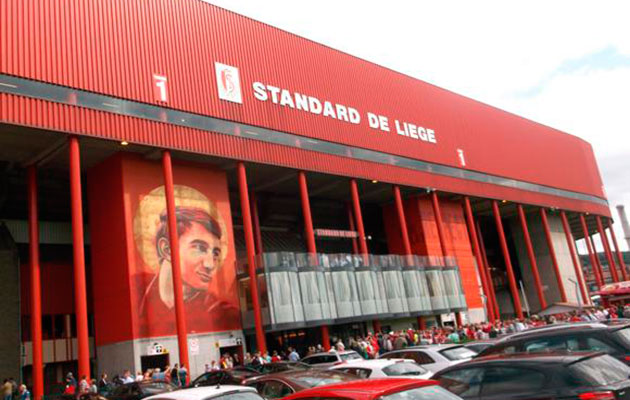 With goals from a young Roger Claessen and Derry-born Johnny Crossan, Standard beat a very good Rangers side to reach the European Cup semi-final of 1962. The Real Madrid of Puskás and Di Stefano then proved too much for the Reds.

Claessen stayed on to score nearly 200 goals for Standard. Today his iconic image is displayed as part of the stadium facade. 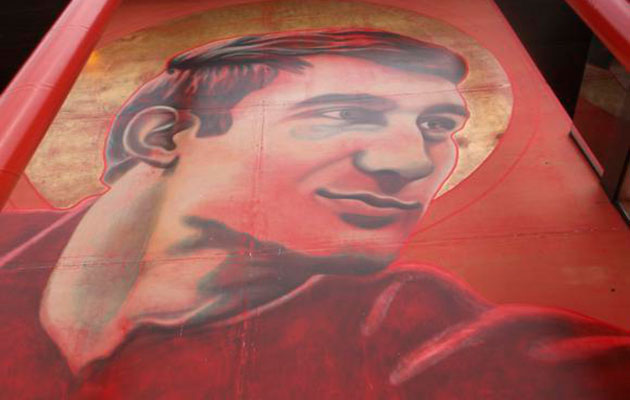 Floodlights ushered in the new European era. As the industry around it declined, so Sclessin gradually modernised, more domestic success and and European TV revenues providing the funds for more seating and increased roofing.

With midfielders Leon Semmeling and Wilfried van Moer at its heart, a dynamic Standard side won three consecutive titles from 1969 to 1971.

The next great team came a decade later, created by master coaches Ernst Happel and Raymond Goethals. Captained by the tenacious Eric Gerets and featuring goalkeeper Michel Preud’homme and Dutch midfielder Arie Haan, Standard at last made it through to a European final. Days before they were to meet Barcelona in the final of the Cup-Winners’ Cup – at the Nou Camp – Standard won the league with an easy win over Waterschei. Too easy. So as to field a full side in Spain, Standard paid Waterschei’s players to sit back for 90 minutes.

Two years after Barca had reversed a 1-0 scoreline to beat Standard 2-1, the bribe came to light. Though most star players had already left, Standard’s staff received bans.

Though the team suffered, the stadium was drastically improved before Euro 2000 – sadly for three low-scoring, unremarkable games. 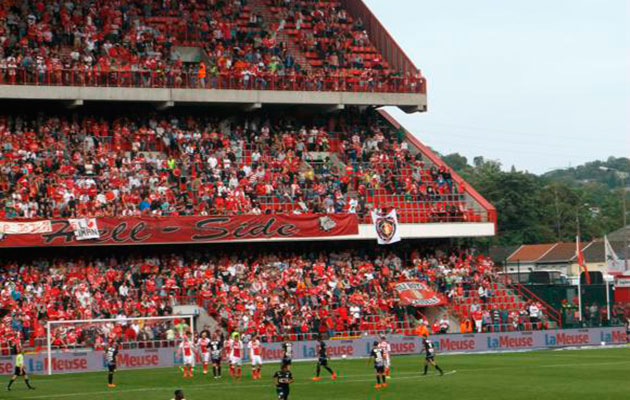 Standard recaptured the glory days under Preud’homme, winning the title in 2008 – and then again, under Hungaro-Romanian Laszlo Boloni in 2009.

Making a first-ever and so far only appearance in the Champions League group stage in 2009-10, Standard slipped back in the league. They wouldn’t challenge domestically again until 2013-14, by which time Roland Duchalet had bought the club, now part of his Europe-wide empire. Standard narrowly lost out to Anderlecht in 2014 and have been through a succession of managers since. 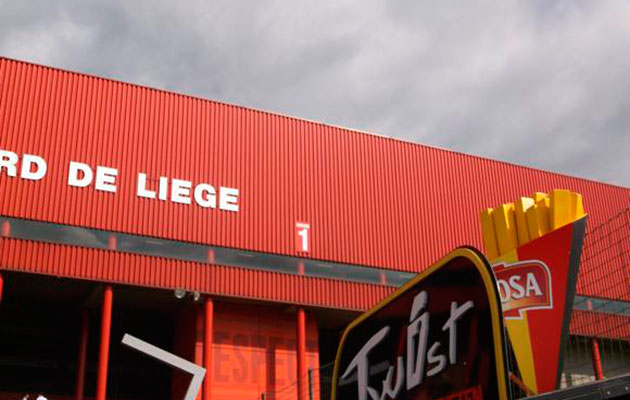 Current capacity at the Sclessin is 30,000. Home fans – Hell Side 81, Ultra Inferno 96, Publik Hysteriek Kaos 04 – make a fire-red commotion in Tribunes III and IV behind each goal, allowing for a constant call-and-response of chanting. Away fans are allocated four sectors – A4, B4 and C4 – of the Quai Vercour, the end nearest the Meuse. 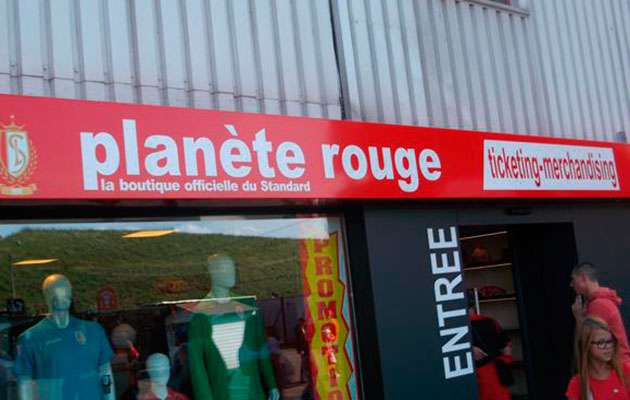 Press and the older group Supporters du Standard are placed in Tribune I alongside rue de la Centrale, where you’ll find shop Planete Rouge, the clubhouse and busy kiosks and bars.

Standard has its own busstop on rue Ernest Solvay, diagonally opposite the stadium. On non-matchdays Nos.2, 3, 9, 27 and 58 lines run directly from Liege-Guillemins station to Sclessin Standard, journey time 10min.

From 90min before kick-off, these lines are diverted away from rue Ernest Solvay and buses stop close to a bridge on the Meuse, where you follow the crowds to the stadium.

The Billetterie (Mon-Fri 1.30pm-5pm) is alongside the Secretariat behind Tribune III on rue Ernest Solvay.

The club has also just introduced a print-at-home online system, requiring you to register at. Foreign addresses are accepted. 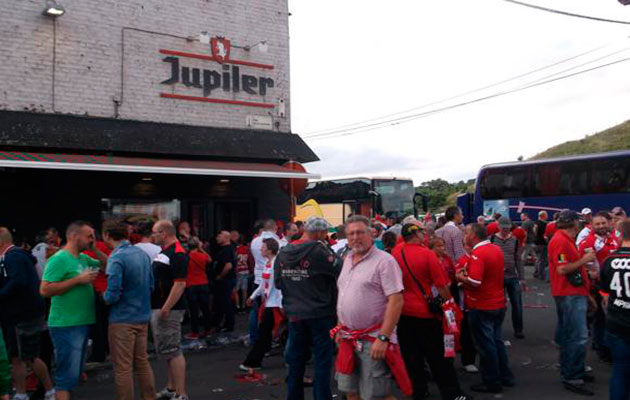 For many matches, pay on the day is rare – you could hang around the kiosks on rue de la Centrale and see if anyone is selling on use of their friend’s season ticket for that match. 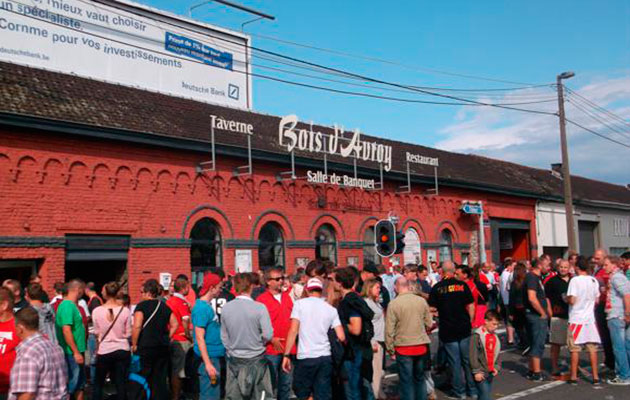 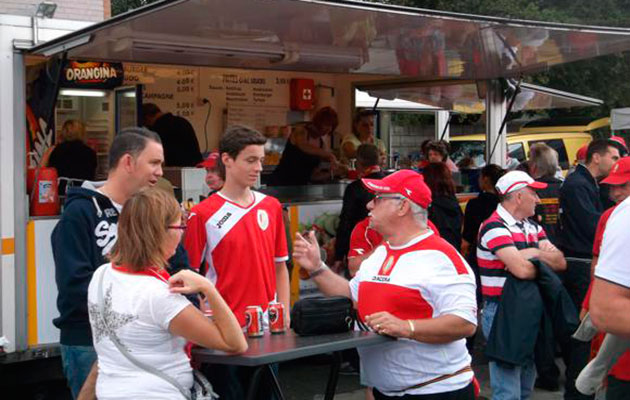