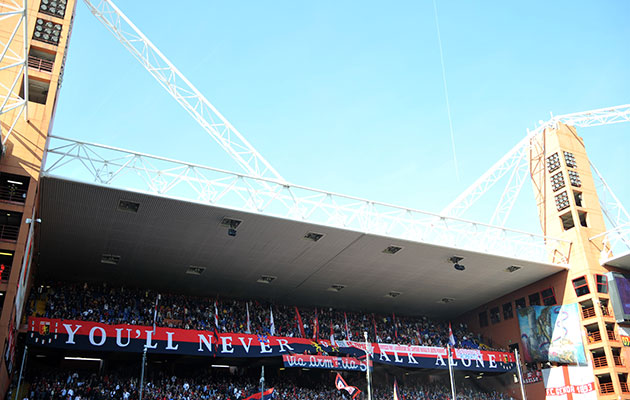 Genoa is one of 175 soccer cities featured in Libero, the digital travel guide for football fans. Regularly refreshed with new destinations and travelogues, Libero is a one-click treasure trove of football trip tips, tales and trivia. See www.liberoguide.com/genoa/ 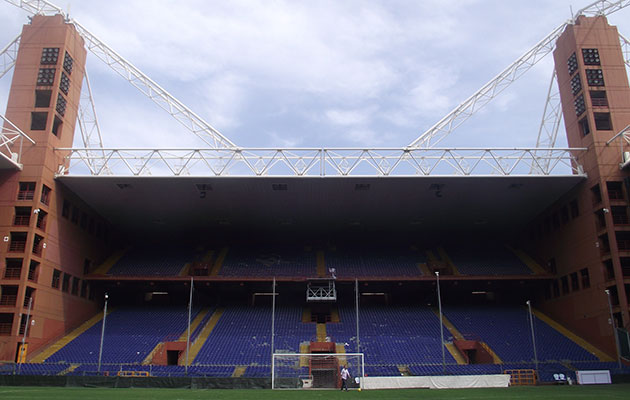 Cradle of the modern Italian game, Genoa is enjoying a renaissance. While improvements to this cramped, historic seaport have given the city a higher international profile, local rivals Genoa and Sampdoria are both occupying spots in Serie A. No, it’s not quite the golden days of 1992 when Sampdoria were European Cup finalists and Genoa reached the semis of the UEFA Cup but football here is back where it belongs – with the elite.

The pair provides one of the key city rivalries in the Italian game, the Derby della Lanterna. The Lighthouse Derby is passionate and colourful but rarely nasty – until recently, the two clubs have been divisions apart in any case.

Also one of a handful of Italy’s high-profile groundshares, along with Milan, Rome and Verona, the Luigi Ferraris Stadium should be hosting both clubs for some time to come – plans for undercapitalised Sampdoria to move out are so far only in the early stages.

The Luigi Ferraris, popularly known by its original name of the Marassi, is a 37,000-capacity red-brick landmark just over the dried-up Bisagno river. 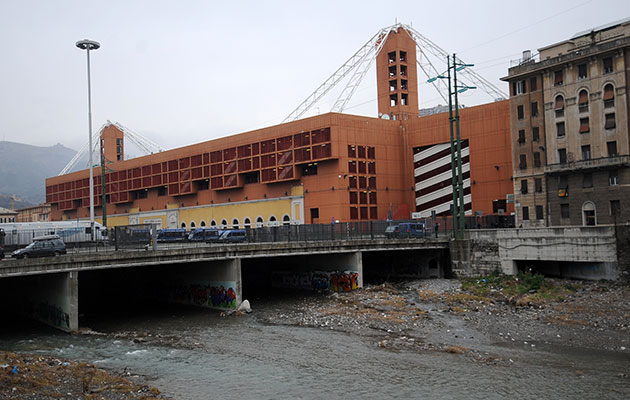 Genoa moved here first. The Genoa Cricket and Athletic Club were formed in 1893 by and for British expatriates. The most notable among them was a certain James Spensley, who opened the club’s football section and initiated the inaugural Italian Football Championship between Genoa and clubs from another venerable football hub, Turin.

In 1898, Genoa won the first Italian championship in Turin, and then another six times before Milan and Juventus came to the fore. It took the arrival of ex-Blackburn winger Willy Garbutt for Genoa’s fortunes to swing back again. As manager, the first of many in Italy to be referred to as ‘Mister’, Garbutt took Genoa to three more titles, returning to coach the club in the 1940s. Garbutt instigated fitness training, paid transfers and arranged matches with foreign opposition.

Spensley, a doctor from Stoke Newington who would die tending enemy soldiers on the battlefield in 1915, kept goal for six of the first seven Italian titles. Two of their competitors in the burgeoning top flight were Andrea Doria and Sampierdarenese, also local.

Originally based in Campasso on the city’s western outskirts, the Genoa club moved to Marassi, on the east bank of the Bisagno, where a ground was opened in 1911.

This became a regular stage for Italian internationals, renamed the Luigi Ferraris after another legendary Genoa player to perish in World War I. Andrea Doria played on a more modest pitch alongside, occasionally meeting Sampierdarenese in the Ligurian leagues.

Merged, then separated, then merged again as Sampdoria in 1946, the new club moved into the Luigi Ferraris. With it came a new shirt (and, subsequently, a new nickname, I Blucerchiati, ‘The Blue-Ringed’), the blue of Andrea Doria combined with the white, red and black rings of Sampierdarenese.

Sampdoria were transformed by oil magnate Paolo Mantovani, who made a handful of wise investments in the 1980s. As well a taste for British players – Trevor Francis, Graeme Souness and David Platt all came to Samp – Mantovani appreciated football know-how. Under wily coach Vujadin Boskov, Samp won a brace of Italian cups before winning the European Cup-Winners’ Cup in 1990. With stars Gianluca Vialli and Roberto Mancini up front, Samp won their only scudetto in 1991 – in a league also featuring Maradona’s Napoli and Baresi’s Milan. A year later, Samp made it to the final of the European Cup at Wembley, only to lose to Barcelona thanks to a memorable Ronald Koeman strike in extra-time.

The Marassi had just enjoyed a major rebuild to host four games at Italia ’90. It was here that Costa Rica beat Scotland, and David O’Leary scored the winning penalty for Ireland over Romania in a shoot-out. With the stadium squeezed between the river, a prison and tight residential streets, further development wasn’t considered until it became necessary for the upcoming World Cup. 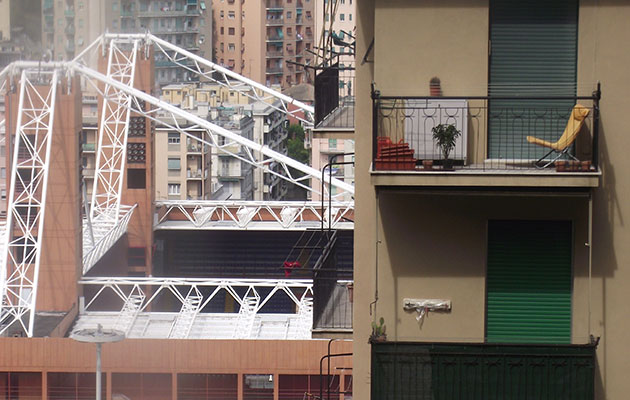 The Marassi’s present-day look dates from this 1989 revamp: the four solid corner towers in distinctive red, a higher pitch and a new upper tier. 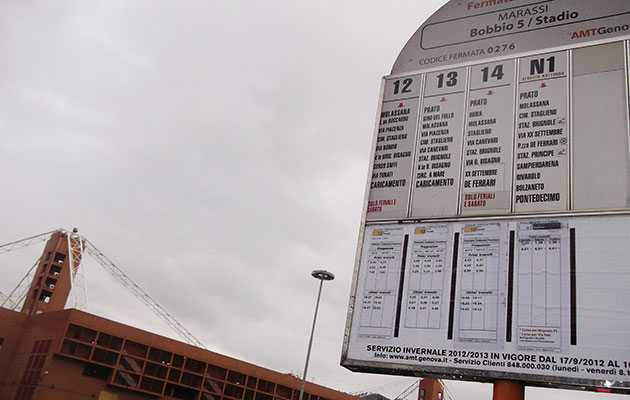 Brignole Station is a 15-20min walk up along the Bisagno – head up via Canevari via the underpass, the other side of the station to the main forecourt. A number of buses run via Brignole up the east bank of the Bisagno to the Monnet-Stadio stop, and back via Brignole from the Bobbio 5/Stadio stop. The No.14 goes from focal De Ferrari metro station (bus stop by Café Biosio); the Nos.12 and 13 go from the San Giorgio metro station by the Old Port.

The Nos.480 and 482 run up the west bank of the Bisagno, from the corner of via Fiume/viale Paulo Thaon di Revel on the station side of Brignole gardens, to Marassi/Stadio six stops away.

On match days, circular buses KM and SM via Brignole run from waterfront piazzale Kennedy and Principe Station respectively. The No.47 also runs to the stadium from piazzale Kennedy instead of its usual route from De Ferrari. 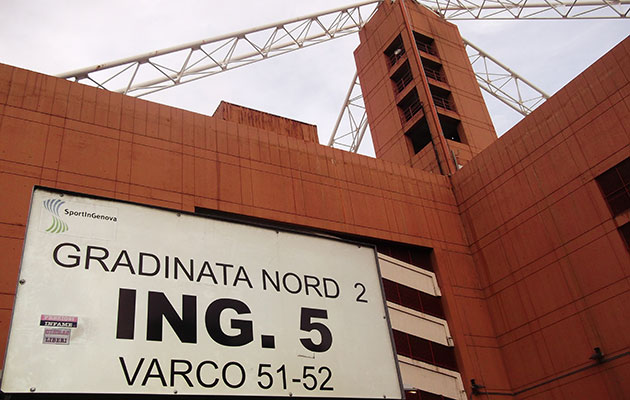 Both Genoa and Sampdoria have their own ticketing arrangements but both distribute online through listicket.com.

Prices are set at €25 in the Gradinata Nord or Sud behind the goal, €40 in the Distinti on corso De Stefanis, and €100-€150 in the main stand, the Tribuna. ID must be shown when purchasing tickets.

Genoa also distribute tickets from their downtown store (Mon & Sat 3pm-7pm, Tue-Fri 9am-1pm, 3pm-9pm) at largo XII Ottobre 37-41r, off via XX Settembre near De Ferrari metro. Griffin figures come in all shapes and sizes or you could pick up a branded beach racket-and-ball for the seafront. 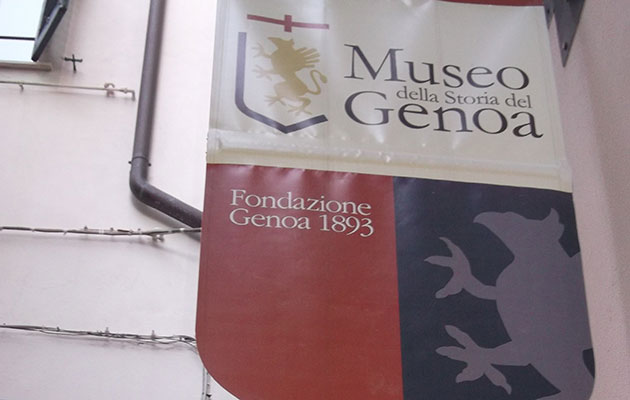 Don’t miss the Museo della Storia del Genoa (Tue-Sat 1pm-6pm, Sun 10am-2pm; €6), tucked away in the small Eataly Palace at Salita Dinegro 7, through an old archway and up a steep street from Salita Caterina. With English documentation, it traces the history of the club from 1893, via ‘Mister’ Willy Garbutt to the present day. 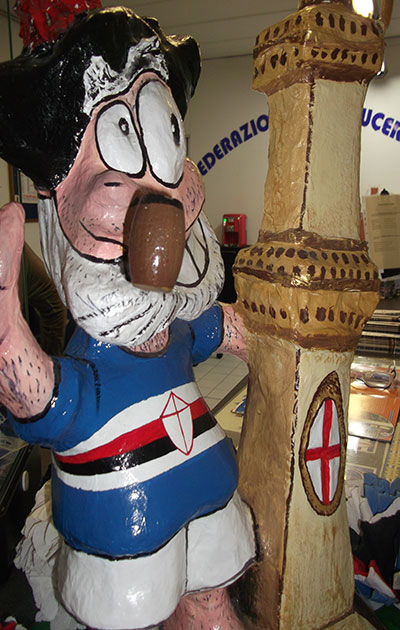 There are two main Sampdoria Points, one behind the Gradinata Sud at the stadium (via Casata Centuriona 20A), one at the bottom end of via Cesarea from XX Settembre, at 107r. Both are decorated with classic, historic photos from the club’s history, and stock items as stylish as pashmina scarves, branded belts and tablecloths. 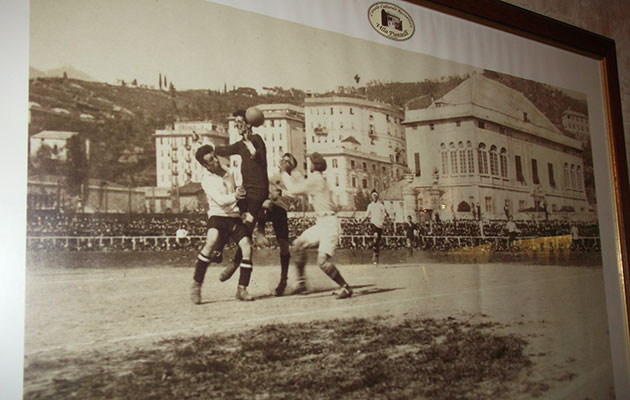 Near the stadium at via del Piano 3r, the store Off Side proffers merchandise from both sides.

There are several bars and restaurants around the ground. Near the Bobbio 5/Stadio bus stop, the Bar Pressing (via Bobbio 2-4r) is a standard Italian bar with a few calcio touches. On the stadium side of the river, on via del Piano, the Centrocampo (No.16-17r) is a friendly little bar in which painted Simpsons characters enjoy a game over a table football.

Turning right into via Centuriona, the Bar Vittorio (No.7r) is a handy pitstop before a string of venues on corso di Stefanis behind the stadium: the evening-only Offside; the Pizzeria Derby (no.79r) opposite with its squares of pizza slathered in pesto sauce; and the Edilio (No.104), a full-blown restaurant.

Pick of the bunch is the Villa Piantelli, once occupied by aristocratic Genoese families, now a now multi-purpose cultural centre, tucked away in a verdant hidden courtyard backed up to the stadium.

In grandiose surroundings, the first-floor bar is decorated with pre-war photographs of the city of Genoa – and its football culture. It’s also the seat of the Marassi Quezzi sporting association, basically an afternoon card school for old locals. 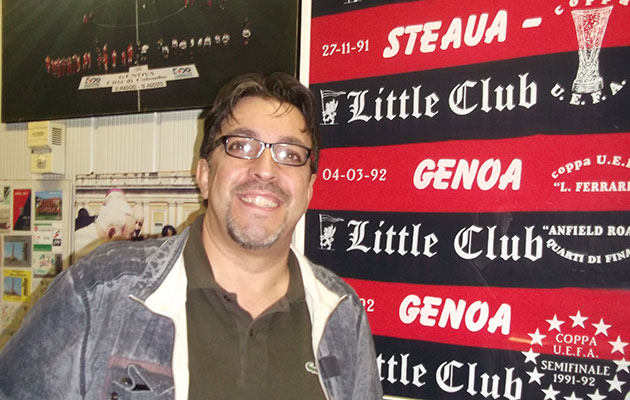 The Little Club Genoa 1962 on via Claravezza is a small bar decked out in souvenirs from the Pope’s visit and the Anfield victory of 1992. It’s open most weekday lunchtimes and before Genoa games next door.