Palermo is one of 200 soccer cities featured in Libero, the digital travel guide for football fans. Regularly refreshed with new destinations and travelogues, Libero is a one-click treasure trove of football trip tips, tales and trivia. See www.liberoguide.com/palermo/

Capital of Sicily, Palermo is both a grand metropolis of palaces, opera houses and soaring Norman churches, and a poorly planned, mafia-led madhouse. Its football club, US Citta di Palermo, are struggling in Serie A and need a win over high-flying Napoli in a derby of the Italian south.

Pink-shirted Palermo had previously been enjoying their most consistent spell in the club’s long history. Under the long-term ownership of Maurizio Zamparini, the ‘Rosanero’ have seen managers come and go but also embarked on five European campaigns.

Their stadium, the Renzo Barbera, still referred to by its old name of La Favorita, was a venue for Irish and Dutch group matches at Italia ’90. It stands out of the city centre, just off the main E90 road that snakes around this north-west corner of Sicily, serving the main international airport named after two judges murdered by the mafia.

It’s a far cry from 1900, when a erudite ornithologist Joseph Isaac Spadafora Whitaker, the then English consul, co-founded the Anglo Panormitan Athletic & Football Club. His colleague and co-founder, Ignazio Pagano, was also familiar with the game, having seen it while completing his education in England.

The team’s first official match came against Messina a year later, and Palermo competed regularly in the Lipton Challenge Cup against Naples. Renamed Palermo Foot-Ball Club, then reformed as Unione Sportiva Palermo after World War I, the team were a mid-range power in the burgeoning game in southern Italy.

The area of La Favorita, north of Palemo city centre towards Mondello, has been an area of recreation for centuries – though its busy, arrow-straight roads and endless residential housing equate little today with the royal hunting grounds of yesteryear. The surrounding hillsides, however, still rise steep and stark behind.

It was here that Palermo settled in January 1932, shortly before gaining promotion to Serie A. Until then, the club had moved from pitch to pitch around Palermo.

Initially named Stadio Littorio, according to the Fascist mores of the time, the ground consisted of two stands, its appearance similar to the many communal stadia being built across Mussolini’s Italy. Until World War II, it even took the name of Italian military martyr Michele Marrone.

The stadium assumed its current oval shape and post-war name, La Favorita, after 1945, with stands all around to accommodate 30,000-plus crowds. An upper tier was added 40 years later.

Further improvements were made for Italia ’90 – though La Favorita remained the smallest World Cup stadium with a capacity of just over 36,000. It was not completely covered all round.

This is how it remains today, the only difference being the 2002 name change to honour the Palermo’s long-term president Renzo Barbera. 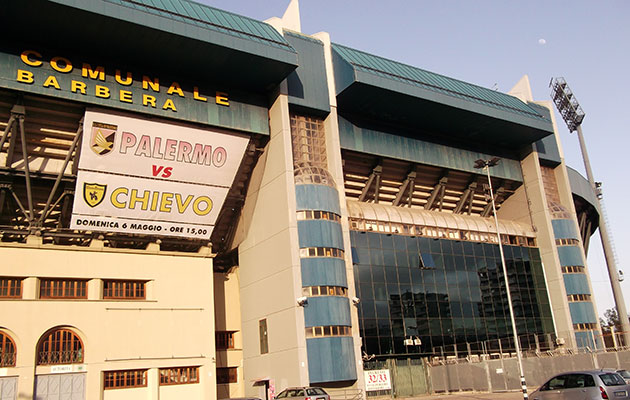 The club that Zamparini bought in 2002 had spent several seasons in the second, even the third flights. Bringing in players from his former club Venezia, and changing managers at will, Zamparini nearly achieved Serie A for Palermo in his first season.

It required the goals of later Fiorentina star Luca Toni to get them there – then claim a European spot in their first season, 2004-05. Another regular, left-back Fabio Grosso, also broke into the national side and would star in Italy’s World Cup win of 2006. By then, promotion-winning coach Francesco Guidolin had gone – only to return on three separate occasions.

Revenue from Toni’s transfer to Fiorentina helped bring fresh young talent to Palermo, who generally performed well at home and in Europe. The high point came under Delio Rossi in 2009-10, when only two points separated Palermo from Champions League qualification.

Miccoli, Cavani and Hernandez had bagged nearly 40 goals between them. With Cavani’s departure, Palermo faltered in the subsequent Europa League campaign.

Palermo beat Milan in the 2011 cup semi-final but defeat to Inter, then poor league form, signalled a decline – and relegation in 2013.

Giuseppe Iachini led Palermo to immediate promotion, the former Palermo midfielder in place as coach for the 2014-15 and 2015-16 campaigns. Ex-Milan midfielder Walter Novellino now leads Palermo’s fight to stay in Serie A.

The Curva Nord is the home end of the Renzo Barbera, the Curva Sud partly allocated to away supporters, sectors 21-23. The uncovered Tribuna Montepellegrino backdropped by the mountain of the same name faces the roofed stand (‘Tribuna Coperta’) nearest to busy viale del Fante.

A handful of buses run the 4.5km from the city centre, most notably the regular No.101 from Palermo Stazione Centrale, where it sets off from columned via Oreto alongside. Turn left as you exit the station building. Stadio is the northern terminus, right by the stadium. The weekday-only No.107 runs a similar route, to viale del Fante-Cassarà by Stadio.

Bus No.106 runs from Teatro Dante to the stadium, to the nearby roundabout, stop name V.le Croce Rossa.

Allow a good 15min from town. 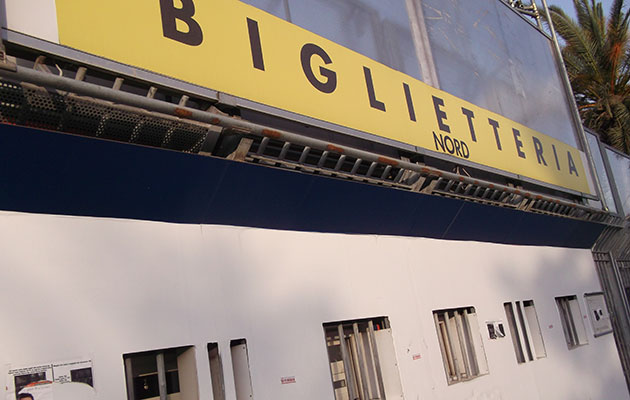 As well as at the stadium, by Torrello 4 (match weekends Fri-Sat 9.30am-1pm, 4-6.30pm, Sun 9.30am-12.30pm), there are several Listicket outlets around town. At the crossroads of via Sampolo and via Imperatore Federico, the corner tabacchi is one source near the ground.

City-centre outlets include piazza Giuseppe Verdi 1, via Cavour 23 and via Garibaldi, among a dozen others.

Note that you must produce ID when purchasing.

With pricing in three categories (Fascia A is for Inter, Juventus, Milan, Napoli and Roma), prices start at €10-40 in the Curve behind each goal, and €14-50 for the upper sideline Tribuna Montepellegrino, and run to €50-140 for decent seats in the Laterale or Centrale. Under-10s get a 15-20% discount.

The nearest outlet for souvenirs, referred to as ‘Palermo Point’, is in fact the modest sports shop, Calcio & Calcetto, offering an equally modest range of Palermo gear. It’s round the corner from the stadium at via Imperatore Federico. 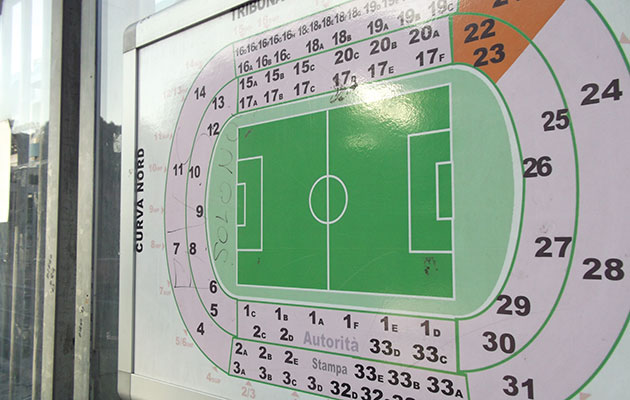 The stadium is surrounded by bars and restaurants of varying types and qualities. By piazza Giovanni Paolo II roundabout on the main road, viale della Croce Rossa, from town, the Golden Bar is a decent choice, providing typical Sicilian arancini stuffed rice balls, superb roast beef Panini and a terrace to sip small bottles of Moretti or Ceres. On the stadium side of the roundabout, Biondo & Biondo is a more upscale eaterie.

On viale del Fante alongside the stadium, Matranga Ettore (No.54) is a standard bar/restaurant with an ice-cream outlet, while Burro (No.48) alongside is a rather swish pizzeria. On the stadium side of the road, by the swimming pool, La Scuderia is equally an upscale contemporary restaurant with a terrace.

For a tiny Italian calcio bar with little but betting and football talk, head for the Bar Garden (via Imperatore Federico 12) by Calcio & Calcetto. 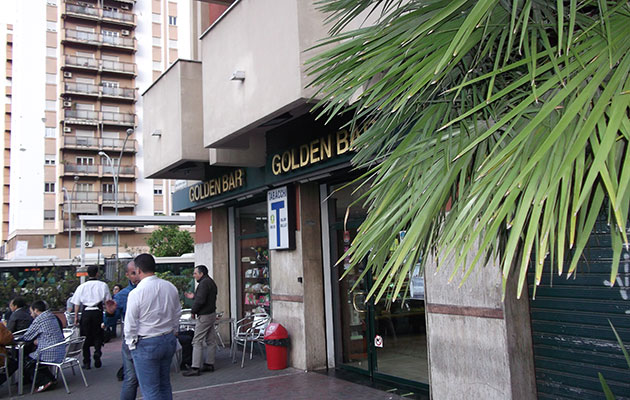 Adam Johnson the exception that proves the rule

Tactics: the rise of Leicester City