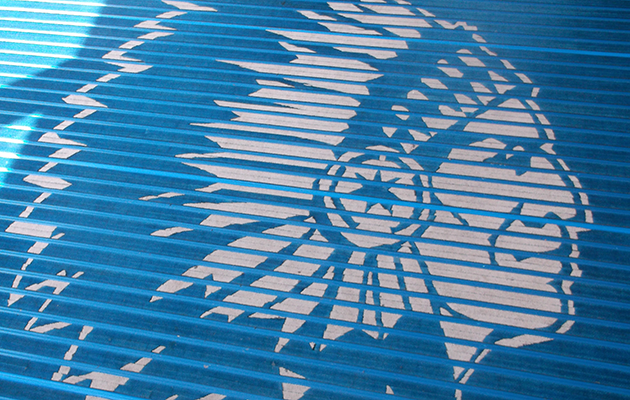 Ghent is one of 200 soccer cities featured on Libero, the digital travel guide for football fans. Regularly refreshed with new destinations and travelogues, Libero is a one-click treasure trove of football trip tips, tales and trivia. See www.liberoguide.com/ghent/. 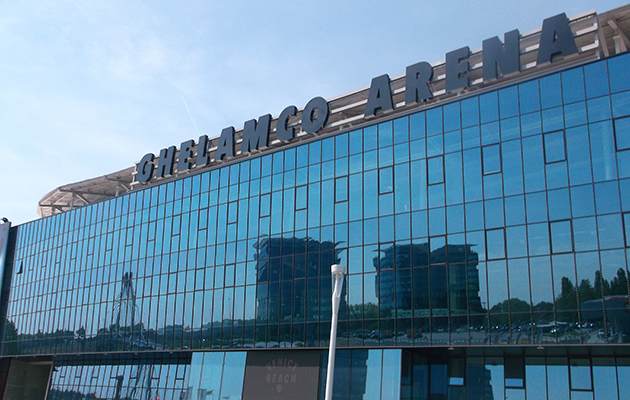 Capital of East Flanders, the port city of Ghent recently eclipsed Belgium’s previous football powerhouses of Brussels and Bruges when KAA Gent won the title in 2015 and reached the knock-out rounds of the Champions League.

KAA Gent run out at the swish new-build Ghelamco Arena, opened in 2013. Having switched from black and white to blue, and gained a bizarre nickname after Buffalo Bill brought his Wild West circus to town, the Buffalos had been based at the Jules Ottenstadion from 1920.

The seventh-oldest club in the country, thus awarded with the matricule number of 7, Gent date back to the earliest days of the Belgian game.

Built just before the Antwerp Olympics, the Ottenstadion was named after one of the club’s founders. It only hosted one match for the 1920 football tournament, the great pre-war Italians Renzo De Vecchi and Adolfo Baloncieri playing in a 2-1 victory over Egypt. 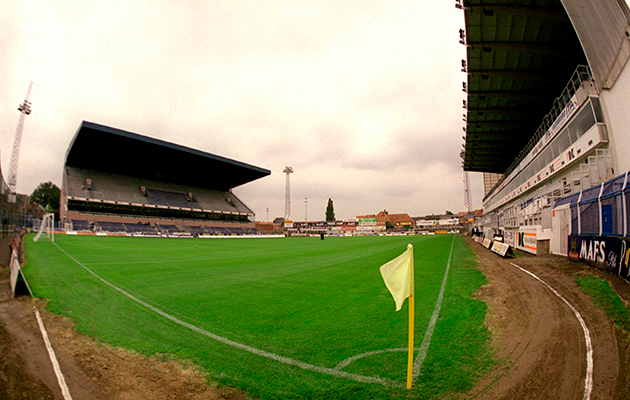 The Ottenstadion witnessed the rise of the Buffalos to cup winners and league runners-up in 2010. Set in Gentbrugge close to the N9 that runs south of Ghent to Brussels, it is not too far as the crow flies from the Ghelamco, south-west of town.

The formerly named La Gantoise made their European debut in the Fairs’ Cup in 1963, then lost narrowly to Bobby Moore’s West Ham in the Cup-Winners’ Cup of 1964.

Officially known as the Flemish KAA Gent from 1971, the club suffered a disastrous run of form that even led to a stint in the third flight. Gent bounced back in the 1980s, winning the cup in 1984 and making a welcome return to Europe.

In 1990, with the arrival of international strikers Erwin Vandenbergh and Dutchman Eric Viscaal, Gent stepped up a gear, just missing out on a first Belgian title then reaching the quarter-finals of the UEFA Cup.

Former Belgian international goalkeeper Preud’homme led Gent to runners-up spot in the league and a cup win in 1990-2000, a season that saw Norwegian striker Ole Martin Arst scoring nearly a goal a game.

Though Arst was quickly snapped up by Standard, Belgian international goalkeeper Frederic Herpoel remained in place to keep Gent in contention in the early 2000s.

With Gent’s higher profile and the Benelux 2018 World Cup bid in mind, attention turned to a new stadium, proposed in 2003, to replace the ageing Jules Ottenstadion. Set by the trade fair centre and ring road south of the city, the stadium, originally named after medieval statesman Jacob van Artevelde, was due to open in 2006.

With the economy in crisis and 2018 eventually lost to Russia, the project stalled, to be revived in 2010. Construction firm Ghelamco was also awarded with the stadium name. 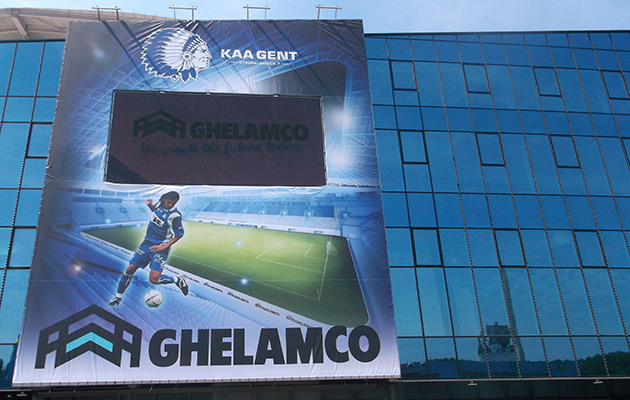 After moving into the Ghelamco Arena in 2013, Gent began to see a settled side established, starting with the signing of a young goalkeeper from Lierse, Matz Sels. Six months later, coach Hein Vanhaezebrouck arrived from Kortrijk and midfielder Sven Kums from Zulte Waregem.

Though Gent trailed Club Bruges during the regular season, a vital 3-2 win at Bruges during the championship play-offs reversed the positions. De Buffalo’s then won a first ever title with a 2-0 win over Standard Liège at a sold-out Ghelamco. Team captain Kums capped a fine season by scoring the opening goal. 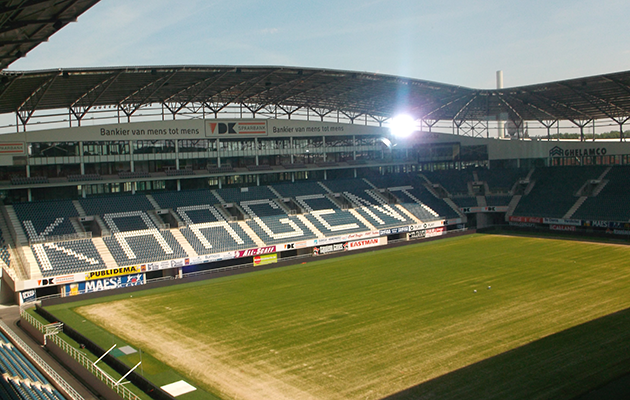 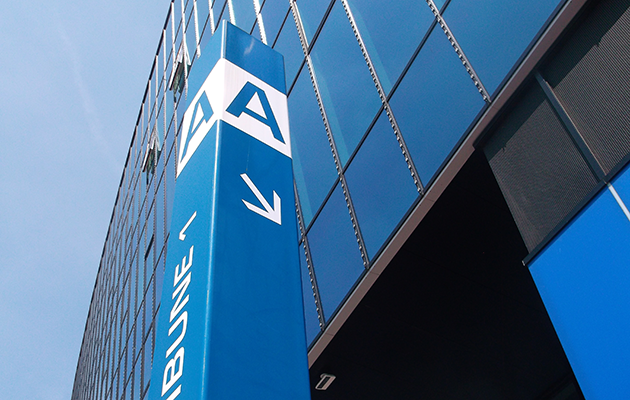 If you’re arriving into main Gent-St-Pieters, on the concourse to the left of the station as you exit, city bus Nos.65 and 67 set off from platform 11. Journey time to the terminus of Arteveldepark is 15min – buses run every 30min during the week, every 1hr Sat-Sun. Services run up to 9.30pm. 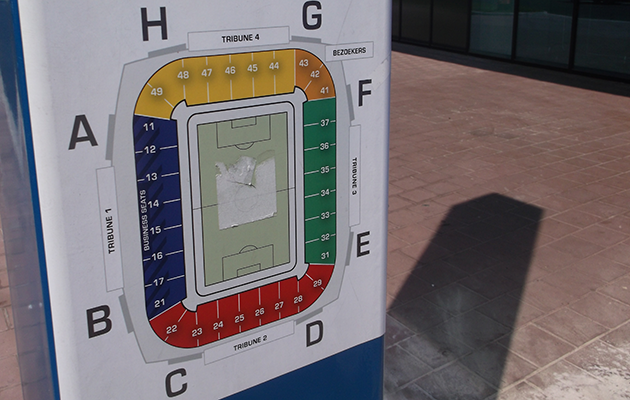 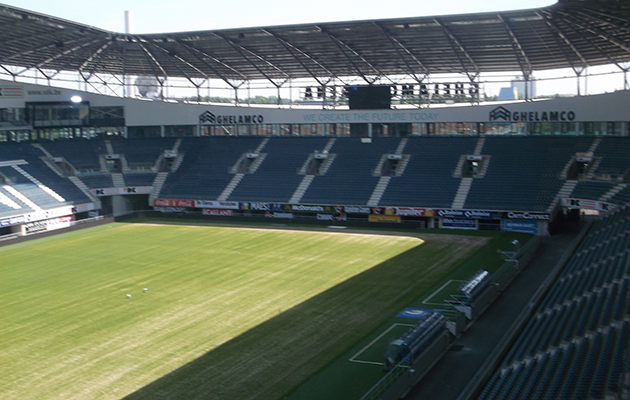 There are no bars around the stadium. Outlets at the new stadium run from a snack bar, the Buffalo Sandwich Club, on the ground floor of the main stand to the Michelin-starred Restaurant Horseele with a perfect view of the pitch from four floors up. Both operate weekday lunchtimes. On match days, you should reserve for the Horseele, while the BSC doubles up as a modest bar.