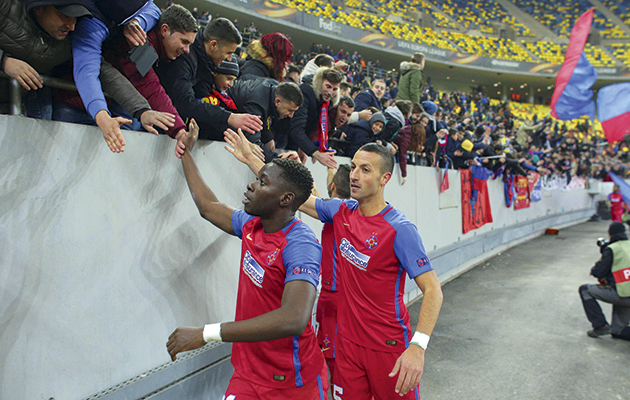 Romanian football is facing its biggest crisis since the fall of the communist regime in 1989 as a lack of strategy and vision from national bodies and club owners has left the league in a state of undeniable mediocrity. And Steaua, the country’s biggest club, are no different.
The 1986 European Cup winners are not struggling to pay salaries like most, but Steaua’s problem is far bigger – and involves their very identity.

Figures from a survey last year show that 49 per cent of Romanian football fans are Steaua supporters. But who exactly are the team that they follow? Is it the same Steaua who won the country’s hearts 31 years ago with a penalty shoot-out victory over Barcelona? Is it the Steaua who won 26 national championships and 22 domestic cups?

The Romanian army say the Steaua people used to know no longer exists, so a new one must be created, and a recent court decision confirmed that the army has exclusive rights to use the Steaua “brand” and all symbols related to it: the name, crest and history. This comes 14 years after real-estate tycoon Gigi Becali took over the club and made it a privately owned business. 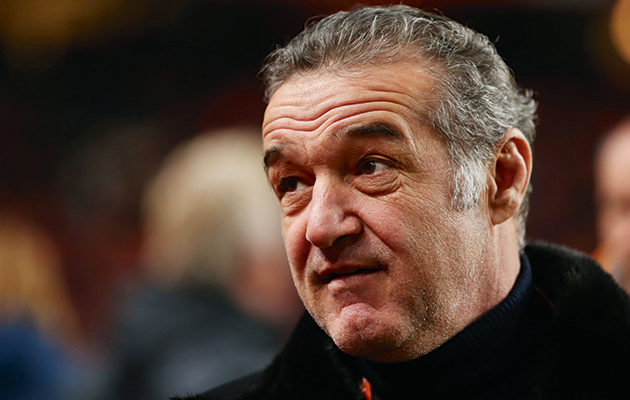 Becali believes his rise to power hides no shady dealings and he is convinced that the supreme court, his last chance to turn things around, will rule in his favour. Yet Florin Talpan, the Romanian army’s lawyer, describes Becali’s fight as “impossible” and regards his adversary as the villain of the story.

“Mr Becali used fake documents to take hold of the club,” says Talpan. “The situation is very simple. Becali’s team must be relegated with immediate effect. They should start from the fourth or fifth division, while the real Steaua, the one recreated by the army, must take their place in the first division.”

Becali claims to have papers and logical arguments on his side, saying: “If it wasn’t for me, then Steaua would be history today. The end.

“I saved it. It was me and my money. I got money coming in the country, I bought players and paid taxes of millions to the Romanian state. I am 100 per cent clean. I am right and I can’t lose this battle.”

The Romanian league could be forced to make a historical decision and officials have advised Becali to change his team’s name with immediate effect.

“I’ll call it Star [the English translation for “Steaua”], FC Star,” says Becali. “But don’t allow the army to fool you. This is Steaua. I have Steaua. There is only one Steaua team and that’s my Steaua.”

Talpan, however, was quick to respond, stating: “Hope he’ll make sure not even an acronym like FCSB will be used from now on because that will only lead to confusion. We have the history and everything related to the Steaua brand.

“We should get Becali’s players as well, because when he illegally took charge, he also had a proper squad to count on.”
Confusing? Supporters might argue that a better description would be chaos.

The two main Steaua ultras groups have already abandoned Becali’s club, while attendances are dropping. Steaua went into 2017 on a historical low, with just a few hundred in attendance at the National Arena for their last games of the autumn campaign. The days when tens of thousands took the stadium by storm for local or European derbies now seem to be from a forgotten era.

“Above anything, we want a clean club,” vows ultras leader Alexandru Tofan. “We feel we have been without a team for more than two years, ever since the first court decided Becali’s club should change its crest. We just want our club back, that’s all.

“We are not going to the stadium until we have a new Steaua team playing, The one created in 1947, with its colours, crest and history.”

The army’s reaction has been to officially announce the creation of a new team. Club hero Marius Lacatus was appointed director of football, while other 1986 winners declared they will be part of the project.

Helmuth Duckadam, who saved four Barcelona penalties in the 1986 European Final, is the only big name behind Becali and says: “These attacks aren’t surprising to me. Becali worked with many of my former colleagues, they earned tens of thousands, hundreds of thousands of euros, and it didn’t bother them one bit.

“Now they come and say Becali is a thief and that he stole the club. I think this is very low.”

Becali is convinced the army’s club will fail, arguing: “If this continues, the Steaua brand will disappear from Europe. They won’t be able to play in the top two divisions. UEFA doesn’t allow a team owned by a political department to play professional football. They just want to destroy me and what I’ve built.”

Three former champions – Rapid, Petrolul and Otelul – went bankrupt last year, but disappearing is not an option at Steaua, as the club loved and hated by millions is keeping the country’s terminally ill domestic game alive. The question is: for how much longer?