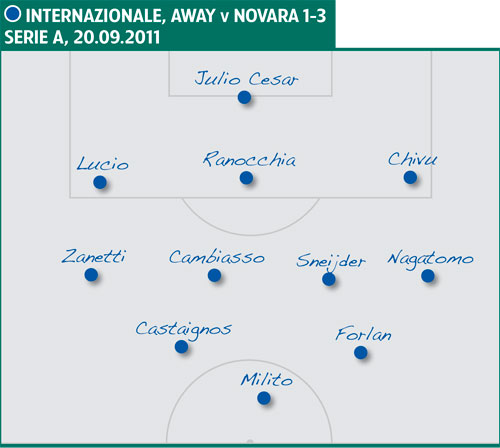 A 3-1 defeat at promoted Novara brought a swift end to Gian Piero Gasperini’s three-month reign as coach of Internazionale, and the day after he was sacked the 53-year-old was in belligerent mood.

“I know that results determine everything,” he said. “Inter knew that my system was 3-4-3. It is not that I do not know another system, but I believe that with this one the team I coach play better. I explained this to Inter’s chiefs three times when I spoke with them. I believe that the controversy about the formation was used as an excuse [to sack me]. If Inter did not believe in my work, why did they sign me?”

Gasperini’s reputation was forged in a three-year stint at Genoa in which he played with a back four in only about a fifth of his games in charge. As it turned out, he used a back four in only one of his five games at Inter – the Champions League home defeat by Trabzonspor.

His sides have always been noted for their quick tempo and high offside line, and the 3-4-3 shape that he favoured. Some coaches, such as Fabio Capello, are tactical pragmatists, willing to shift formation according to circumstance; others, like Gasperini, have a model towards which they try to mould their squads. If Inter owner Massimo Moratti didn’t want to watch his side playing a high-octane 3-4-3 – and his comment, shortly before the season began, that he thought Gasperini would change to a back four suggested he didn’t – then why on earth did he appoint an evangelist for 3-4-3 in the first place?

The difficulty, as was widely predicted, is that it’s hard to imagine a squad less suited to Gasperini’s model than Inter. 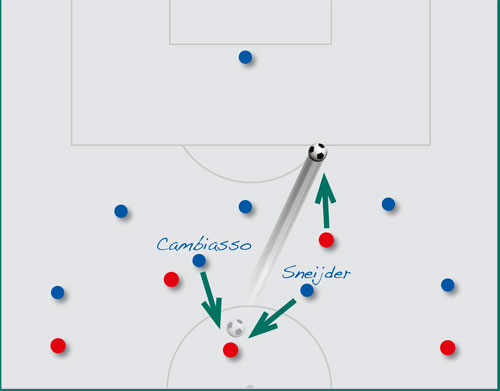 When playing a high defensive line, midfielders like Cambiasso and Sneijder must quickly close down the player in possession to prevent him having the time and opportunity to pick out a ball over the top

Three at the back can be a way of protecting slow defenders by supporting them with a sweeper, but in Gasperini’s system the three play in a line, strung across the pitch, protected by a combination of their positioning and the pressing of the midfield. However, a high line demands pace so that if the ball is played over the top the defence are able to get back to cover. For two of the three defensive spots, the trio of Lucio, Walter Samuel and Cristian Chivu have a combined age of 96, which places great responsibility on Andrea Ranocchia, who isn’t that fast anyway.

Similarly, the high line is only effective if the midfield are quick to press the opposition when they are in possession. Key to Inter’s midfield, though, are Javier Zanetti, the captain, who is 38, Dejan Stankovic, who is 33, and Wesley Sneijder, who has increasingly come to define himself as a midfield creator, almost an anachronistic No10. None are natural fits for the Gasperini style.

On arriving at Inter, Gasperini soon decided that Sneijder didn’t work in his midfield, starting him on the bench in the 4-3 defeat at Palermo and then bringing him on to play as one of the wide men up front. Sneijder, not surprisingly, didn’t look comfortable chugging up and down the left flank, but he did drift inside twice to contribute to the two goals Inter scored in the second half.

“Sneijder is a champion, but I do not use a playmaker, so I tried to put him lower on the field, then higher and close to the goal,” said Gasperini. “I tried everything and nothing worked.”

The wing-backs, Maicon and Yuto Nagatomo, perhaps, would probably have relished Gasperini’s system but, unfortunately for the new coach, Maicon’s injury problems meant that the relatively inexperienced Jonathan or the ageing Zanetti had to fill in on the right.

Although Inter’s centre-forward Diego Milito was one of the few to seem relatively happy with the system, it was the forward line that seemed to cause Inter’s new coach most consternation.

“With [Samuel] Eto’o sold, I wanted two players: Napoli’s Ezequiel Lavezzi and Genoa’s Rodrigo Palacio,” said Gasperini. “We could not spend any cash? Fine, but we could [try to] sell Wesley Sneijder, Goran Pandev, Davide Santon, McDonald Mariga and Sulley Muntari. With two wide players, and Diego Milito or Giampaolo Pazzini in the centre, there were no problems: they could all play 30 games, in Serie A, Champions League and the Italian Cup. Instead, came Diego Forlan.”

Under Uruguay national coach Oscar Tabarez, Forlan has proved himself one of the most tactically versatile forwards in the world – but he is not a winger. Nor is Ricky Alvarez, Inter’s baffling summer signing from Velez Sarsfield. With only three of the outfield 10 players – plus perhaps Esteban Cambiasso, if we’re being generous – playing in what might be considered their natural positions, the result was disjointed football. Five games brought a draw and four defeats, and Gasperini was gone. 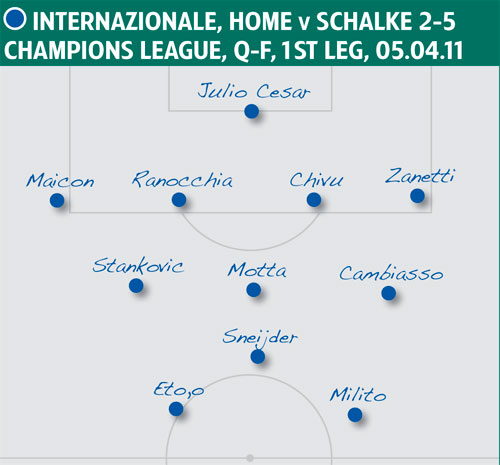 But, as he said, why appoint him? If Moratti wanted to rejuvenate and remould the squad – and, frankly, with their narrowness which was so brutally exposed by Schalke in the Champions League last season, it’s not just the age of the players that makes Inter look outmoded – then he had to give his coach more time and be more aware of what was needed in the transfer market.

If Moratti wanted somebody to coax this squad through another season, making the best of ageing resources, then Claudio Ranieri, appointed to succeed Gasperini, was probably a better choice from the start.

In the two decades before calciopoli opened the way from them, Inter were undermined by a culture of short-termism, with vast sums being spent without any coherent plan. That tradition, it seems, remains strong.