Welcome to our player profile on little Italian playmaker Marco Verratti. Despite his small stature, he has become one of the key midfielders in the giant French side. We wrote about him back in August 2012 so check that out below.

Paris Saint-Germain and their paymasters at Qatar Sports Investment are not only looking to corner the high-roller market in the shape of Zlatan Ibrahimovic, Thiago Silva, Ezequiel Lavezzi and Javier Pastore. PSG’s technical director Leonardo also has a medium- to long-term strategy, hence the £8.5million he splashed out this summer on Italian midfield starlet Verratti, the teenager who played such a prominent role in Pescara’s recent promotion to Serie A but has yet to play top-flight football himself.

Last spring, the consensus of opinion among the calcio cognoscenti was that the brilliant Marco Verratti was Juventus-bound, that the newly crowned Italian champions had identified him as the heir apparent to veteran midfield “quarter-back” Andrea Pirlo. A lifelong Juve fan, the teenager would have jumped at the chance to become a bianconeri, but ultimately the move fell through, scuppered by Pescara’s insistence on the fee being paid in cash rather than players.

At the same time as Juventus’ interest was cooling, PSG’s acquisitive instincts were burning ever hotter. Mightily impressed by Verratti’s technical gifts and intelligence, the club’s Italian coach carlo Ancelotti pushed hard for a deal to be done. With the French club offering more than Pescara’s asking price and the novice bewitched by the prospect of joining an empire in the making, negotiations soon came to fruition.

“People are right to talk about me being a little anonymous at the moment,” smiled a relaxed Verratti at his welcome-to-Paris press conference. “compared to the big stars at PSG, who’ve already won many things, I still have everything to prove. This is a beautiful adventure, the next step in my apprenticeship. I want to show off my talent and prove in every game here that I belong in such an ambitious club. 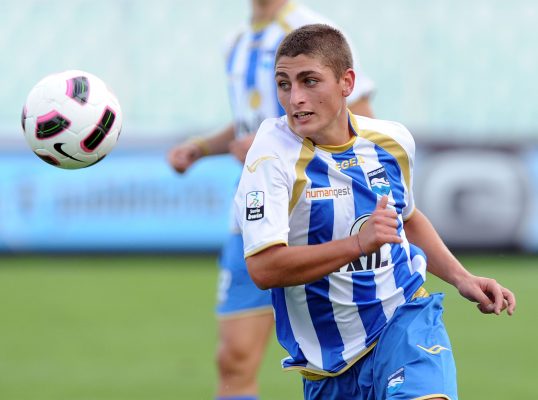 “PSG have given me the opportunity to play with champions that I normally watch on TV. I do think that clubs abroad have more time for young players than back home. Italy would do well to stand by its own youngsters.”

While his claim that the Italian game does not put enough emphasis on youth development, generally does hold some water, in his own case, he was being slightly unfair. Both at the Pescara academy and with Italy’s junior representative teams, he has been carefully nurtured. And in the last 12 months at Pescara he benefited enormously from the know-how and advice of coach Zdenek Zeman, the veteran Czech who is now in charge of Roma.

It was Zeman’s decision to switch Verratti from “the hole” to the role of deep-lying playmaker – and what a spectacular reconfiguration it proved.

Related: Take a look at the new PSG kit here

The youngster went on to occupy centre-stage in Serie B with his laser-like long passes, capacity for killer passes in congested areas, comfort on the ball, prowess as a dribbler and calm, unhurried reaction to an opposition pressing game. Unsurprisingly for one so young, he does have his faults, namely his lightweight physique and a lack of goals. Yet he is a rare talent all the same, and certainly deserved his place in Cesare Prandelli’s preliminary 32-man squad for euro 2012. He would not make the final cut in this instance but if all goes according to plan, his name is most unlikely ever to be erased again.