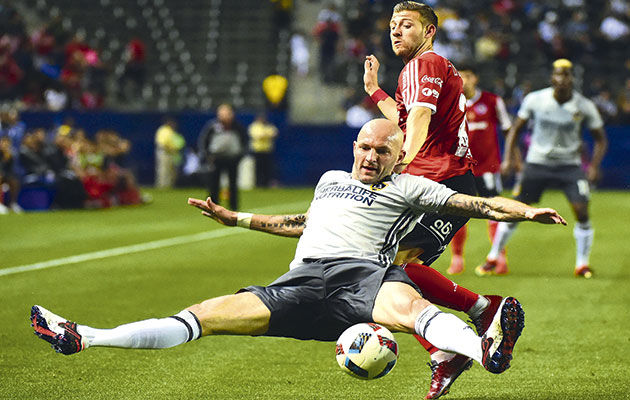 If expecting the unexpected means excitement, then quite definitely Major League Soccer has to be one of the more exciting football leagues in the world.

The 2015 season, for instance, ushered in Portland Timbers as champions – a team who were surely not on anyone’s likely list. Playing only their fifth season in the league, Timbers were coming off a poor 2014 in which they failed to make the play-offs. And it wasn’t until half way through the 2015 campaign that Timbers, under their young American coach Caleb Porter, arriving straight from college soccer, started to mow down their opponents.

Part of the early problem had been an injury to key Argentinian midfielder Diego Valeri. Once he regained fitness, Timbers swept through to the Final and a 2-1 win over Columbus Crew.

Glamour was on the MLS menu in 2015, with two new clubs, New York City FC, and Orlando City SC. Expansion teams are not supposed to do well for a year or two – and both duly failed to make the play-offs – but this was not seen as a major tragedy, mostly because both were drawing big crowds, with season averages of 29,016 in New York and 32,847 in Orlando. 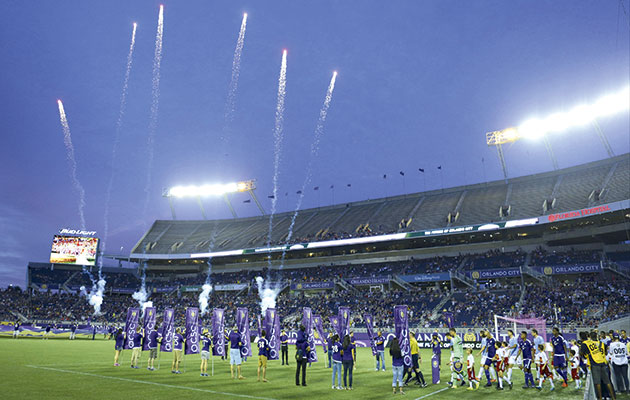 But the NYC owners – the Sheikhs who also own Manchester City – reacted sharply and fired the coach, Jason Kreis. It looked like a hurried, almost panic, move. Kreis left quietly, but many observers, remembering his astute player signings during his days as coach of Real Salt Lake, found it impossible to believe that he had been responsible for bringing in some of the truly poor players fielded by the club.

In his place came Patrick Vieira, whose appointment carried with it a suggestion that the job is an apprenticeship, training for a future appointment with Manchester City.

NYC’s most important signing, David Villa, had a good season, scoring 18 goals for a weak team. His opposite number for Orlando, Kaka, also sparkled, with 10 goals and seven assists. The two joined forces in mid-season and proved a sprightly duo, playing for the MLS All Star team that beat Tottenham Hotspur 2-1. Kaka scored one goal and assisted Villa for the other.

Beating international opposition is always welcome news to MLS biggies, among whom commissioner Don Garber repeatedly assures everyone that it will be one of the world’s major leagues by 2022. There are plenty of encouraging signs to support that positive thinking; from the building of new stadiums to new attendance records and television contracts, to the continued arrival of star players.

However, that last fact remains something of a double-edged sword because the vast majority
of the famous arrivals are at the end of their careers and the last thing MLS wants is to be known as is an elephant’s graveyard.

Sometimes the “elephants” showed they were far from over the hill, with Robbie Keane still scoring goals for LA Galaxy (94 in 141 games since arriving as a 30-year-old in 2011). Representing a more positive approach was Toronto’s signing of Italian striker Sebastian Giovinco, in his prime at 28. With 22 goals – many of them in the spectacular class – Giovinco was the league’s top scorer. He also won both the Newcomer of the Year and the Most Valuable Player awards. In addition, his signing got the league’s seal of approval as the Best Transaction of the year.

The best transaction for 2016 may already have happened, with Seattle Sounders securing Jordan Morris. It seemed likely that Morris – at 20, widely considered to be the most promising young American player – would, after just two years at Stanford University, join a European club. But following a trial with Germany’s Werder Bremen, who were keen to sign him, Morris returned to the USA to join Seattle, the club with which he has grown up. Seattle’s part of the deal was a $225,000 annual salary: the largest ever offered by an MLS club to a home-grown player. 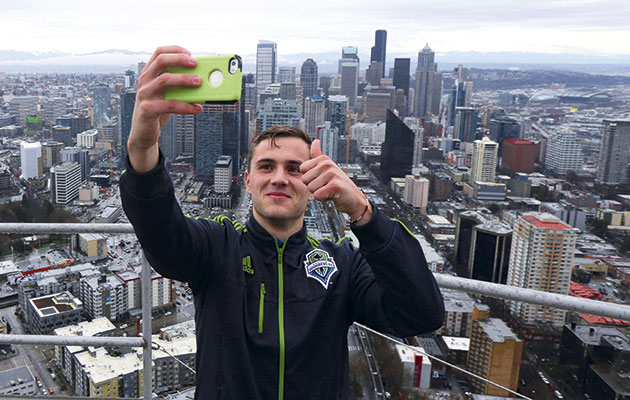 Whether the deal with Morris marks a new era for MLS, in which its clubs will be willing to pay big money to sign young Americans, seems unlikely. While Morris was opting for Seattle, another American youngster, 17-year-old Christian Pulisic, was breaking into the Borussia Dortmund first team.

Any move towards signing young domestic players certainly does not seem to be part of coach Bruce Arena’s plans for Los Angeles Galaxy. Arena has sold the 27-year-old American international Omar Gonzalez to Pachuca in Mexico, while bringing in four Europeans: England’s Steven Gerrard (age 35) and Ashley Cole (35), Belgium’s Jelle Van Damme (32), and Dutch midfielder Nigel De Jong (31), plus a combative American midfielder in Jeff Larentowicz (32). De Jong’s name has not been well received. On top of his well established reputation as a violent player, he is well remembered by US fans as the player who broke the leg of Stuart Holden, a popular young American now retired – the broken leg was a factor – and working as a TV analyst.

While NYC FC struggled in 2015, Red Bulls – their rivals in New Jersey across the Hudson River – were having an exceptional season under new coach Jesse Marsch. While their high-pressure game was not scintillating, the results were mostly in the win column. Red Bulls won the league’s Supporters’ Shield for the team with the most points in the regular season and by the time the play-offs came around, they found themselves in the unprecedented position of favourites to take the MLS title. The dreams came unstuck with a semi-final loss to Columbus, but the Bulls management, evidently satisfied with Marsch’s system of play, have made few changes for 2016 and Bulls continue to be a club that spends cautiously.

The one big move was the transfer of young American defender Matt Miazga to Chelsea for a reported $5million – really an enforced change, as Miazga would be a free agent at the end of the MLS 2016 season.

Another surprising move came in Denver where Colorado Rapids, never known as a team that makes
big moves, announced the arrival of a Designated Player, albeit a rather obscure one – Basle’s Albanian forward Shkelzen Gashi.

Chicago Fire finished the 2015 season as the club with the league’s worst record. New general manager Nelson Rodriguez reacted by making an unexpected move in announcing the new coach would be Veljko Paunovic, who led Serbia to victory in the 2015 Under-20 World Cup. Paunovic says his intention is to go with as many young – presumably American – players as he can.

The development of young players is clearly something that MLS clubs want to accelerate. All 20 clubs now have fully funded academies and the league has entered into a partnership with the French Football Federation, under which MLS coaches – those working in the academies – can take the lengthy and stringent courses that the FFF conducts for its Elite Formation Coaching licence.

Victoriano Melero, deputy director general of the French Federation, says: “The idea behind all this is to improve the training of young American players and, at the end, it will benefit of course, MLS, but in particular the national selection.”

But there is a problem with that “of course MLS”. Because it is not at all certain that promising starlets will opt for MLS clubs in preference to joining a team in Europe.

Another – possibly unexpected – MLS event in 2016 will be the league’s decision to take a pause in its expansion programme. It will go with the 20 teams that played in 2015. However, the plans are to add two more teams in 2017: Atlanta United and Los Angeles FC. The LA club will be, in effect, a replacement for Chivas-USA which went out of business in 2014.

The big and intriguing question hanging over MLS expansion continues to be the fate of David Beckham’s group and its bid for a club to operate in Miami. Finding a site for a suitable stadium has proved mighty difficult.

At the moment, the group is working on its third attempt. If successful, it is expected a Beckham-operated Miami franchise will join MLS in 2018, probably along with Minnesota United, bringing the league up to 24 teams.

The short and mid-term prospects for MLS look good, then. The only problem yet to be worked out is how much longer the league can continue to operate under its highly restrictive financial rules – the so-called single-entity system.

While the league continues to find ingenious ways in which its clubs can spend more money than its own rules strictly allow, it becomes increasingly clear that if the dream of MLS as a world power comes to pass, it will only do so when the league decides it can afford to match the spending of the major European clubs. The alternative to that is not an appealing one. A future – already foreshadowed by some of the player deals for the 2016 season – in which MLS loses (often without being able to get any money for them) its best young players, and sees its clubs’ squads filling up with over-30 players from Europe.

For the moment, the only MLS team showing pronounced geriatric tendencies is Los Angeles Galaxy, where as many as seven of the starters are likely to be over 30.

Maybe all that experience will mean another title for Arena and his men, but it seems more likely that the teams that did well in 2015 – and which are not making any sweeping changes – will continue to flourish: Red Bulls, Columbus, Portland, Seattle. And Dallas – the youngest and the most exciting team in 2015.