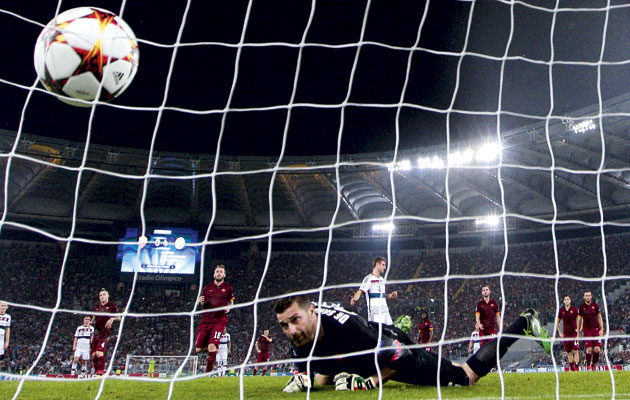 Football has entered a new age, and this is the age of the super-club. Wealth is increasingly concentrated in the hands of the few and that is having a profound effect; not merely on who can win tournaments, but how football itself is played. More than anything else, it is the domination of those clubs that explains the recent trend away from defensive football.

The power of the super-clubs is perhaps best demonstrated by looking at the narrowing spread of teams who reach the Champions League semi-finals.

After five years of the European Cup, there had been 13 different semi-finalists. Moving forward in rolling five-year blocks, those 20 slots tended to be filled by 14 or 15 different teams – until the 1980s, when the diversity became even more marked and it was common for 16 or 17 different clubs to reach the semi-finals over a five-year period, reaching a peak of 18 in the five seasons up to and including 1986-87.

In the Champions League era, the figure began to fall, to a low of just eight sides in the five seasons up to and including 2008-09. Since then, there have been nine or 10 different clubs occupying those 20 places in each rolling period up to last season.

Occasionally a Borussia Dortmund or an Atletico Madrid will punch above their weight, but they have had to get used to seeing their best players sold off at the end of the season. Both have reacted positively to this, but the example of Dortmund this term suggests no side can thrive in the long term if it constantly has to replace two or three players each summer.

The ramifications of the super-clubs’ strength are seen domestically. Bayern Munich again dominate the Bundesliga, while Juventus have been by some way the best side in Serie A for three or four seasons. Only Paris Saint-Germain’s staggering ineptitude has created a title race in France, Chelsea and Manchester City again lead the way in England, and Spain is a battle of the usual big three.

There is a general lack of competitiveness and that has had a logical if unexpected effect on the latter stages of the Champions League.

Six years ago, I interviewed Igor Biscan in Zagreb. He was winding down his career with Dinamo and was even more lugubrious than usual after another early exit from the Champions League.

“Every season it is the same story,” he said. “We dominate domestically, but when we are close to entering the Champions League, we are not good enough. We don’t have enough hard matches, so when it comes to one or two tough games we cannot match teams from a higher level.”

Dinamo, he said, had forgotten how to fight. They sauntered through Croatian league games with the full-backs and midfielders bombing forward, and nobody worrying too much about stopping the opposition playing. It was about breaching defences that sat deep and in numbers. Actual competition was almost unknown.

The “Biscan Principle” is now beginning to be seen in more major leagues. After strutting through a Bundesliga campaign, with breaking their own records the only real challenge, is it any surprise Bayern found it difficult to adjust when they faced teams closer to their level? Last season they were humbled 4-0 at home by Real Madrid in the semi-finals. That in itself was reminiscent, both in style and margin of defeat, of the devastation they had inflicted on Barcelona in the semi-finals the previous year when winning 7-0 on aggregate. 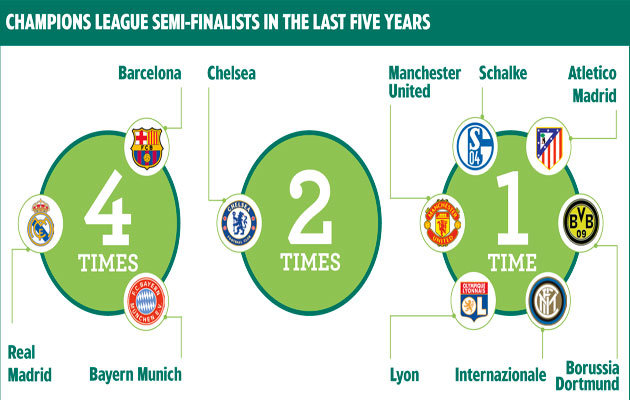 The statistics bear this out. Over the past 20 seasons, the semi-finals have yielded an average of 9.7 goals. In each of the last five years there have been at least nine goals in the semi-final – which includes 14 in 2012-13 and 13 in 2010-11, although that was slightly inflated by the presence in the last four of Schalke, the weakest semi-finalists for some time, and who were predictably despatched 6-1
on aggregate by Manchester United. So recent semi-finals, from a historical point of view, have brought a higher than average number of goals.

But what is really striking is the margins of victory. The five-goal aggregate by which Real beat Bayern last season is tied with the United–Schalke tie as the second-biggest in a semi-final in the past 20 years, behind only Bayern’s 7-0 win over Barca.

Over the past four seasons, the combined margin of victory for both semi-finals was seven, one, eight and seven. You have to go back to 1996-97 for the last time there was a combined margin of victory even of six. Over the past 20 years the average in the semi-finals is 3.65: four of the past five seasons have exceeded that. Semi-finals have stopped being the cagey affairs tradition suggested they should be and have started producing emphatic victories.

Schalke’s surprise progress to the semi-final in part explains that – but no one could claim Barcelona in 2013 or Bayern last season had somehow gone a round or two beyond their capacity. This, surely, is the “Biscan Principle” at play: teams used to winning, but who had effectively forgotten how to fight in an even contest. The relative ease of their domestic competition had softened them up and so, when momentum went against them, they had no way of hauling it back.

As the super-clubs’ dominance continues, so this seems likely to become more of a trend. Until, that is, we reach what feels like the inevitable conclusion of modern football: that the super-clubs form a super-league.