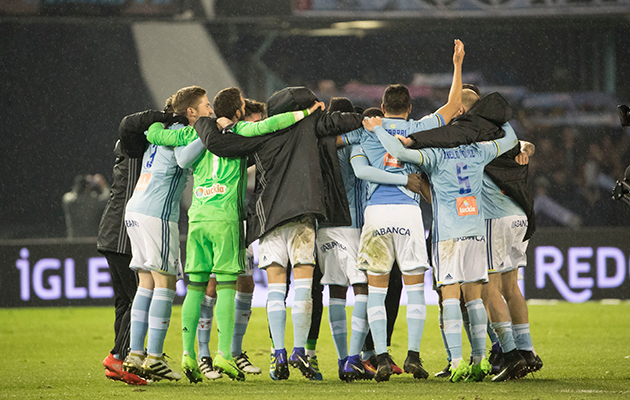 John Guidetti was beaming. All round Balaídos they were singing, going wild. The Celta striker stood by the touchline, that grin threatening to engulf him. “Look at this,” he said. “Thanks Vigo; thanks the whole of Spain.” Rodrigo Faez, the touchline reporter, asked him if he knew the club’s anthem. “I love it,” the Swedish forward grinned. “I am Galician. Good day. Good party.”

It was some party, alright. Celta de Vigo had just knocked Real Madrid out of the Copa del Rey to reach the semi-final, with a 2-2 draw in the second leg having won the first 2-1 at the Bernabéu. Guidetti said sorry, he couldn’t understand much, couldn’t hear much either, and dashed down the tunnel. But at about half past 11, he and his team-mates were back. The fans had refused to go until they came out again, so they could celebrate some more.

Some time later Madrid’s players had long gone, but journalists were still waiting. “we haven’t see any Celta players yet,” one said on the radio, “but we can hear music coming from the dressing room.” This was a huge achievement, taking them to the semi-final for the second year in a row. Last time they had defeated Atlético, this time they had defeated Real.

They will hope to reach the final too – and maybe even win the first trophy in their history – after they avoided Barcelona and Atlético, draw instead against Alavés. They have played three finals before but never won it. One thing is for sure: at least one team which has never won the cup will reach the final; Alavés have never been there. “We have to enjoy the moment and look to the future with hope,” Celta’s manager Toto Berizzo said. “I’m pleased for the players – they deserve this.” 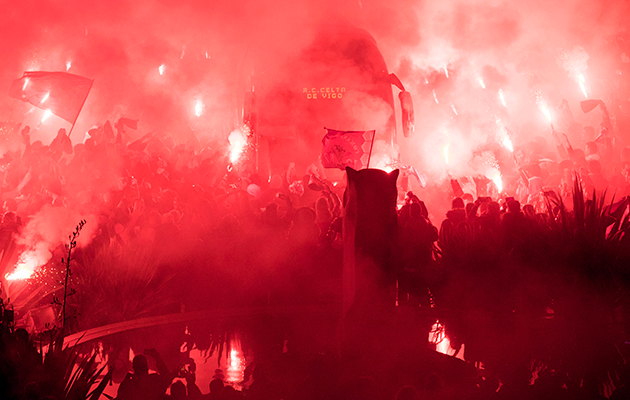 Celta Vigo fans light flares as the team coach arrives at the stadium.

Victory is not eternal,” Sergio Ramos said. But so long it had looked like it. Forty games unbeaten, Madrid have now won just one of the last five. Knocked out of the cup – the talk of the treble gone – and defeated for the first time in the league, thing feel different now.

Marca’s front page on Friday asked: “Is it serious, doctor?” They’re still top and the performances really haven’t been as bad as the results seem to suggest, while in Vigo they fought to the finish and Sergio Ramos was right to say “we’ve still got the league and the Champions League left and they’re the most important competitions”, but it feels like it could be. Besides, at Madrid every symptom is magnified a thousand times. Racked by injury, they’ve now lost as many times in 2017 as they did in the whole of 2016.

“I’d like a Barcelona-Celta final,” Luis Enrique said after his team beat Real Sociedad 5-2, 6-2 on aggregate. He could still get it too. The other semi will be Barcelona vs. Atlético, Spain’s “other clásico”, a game that has decided so much in recent years. Starting at the Calderón, finishing at the Camp Nou. It is the seventh semi-final in a row for Barcelona, their tenth in the last eleven years. As for Atletico, it is their sixth semi-final with Simeone – three in the cup, two in the Champions League, one in the Europa League. “It’s the objectives that count,” Simeone said. 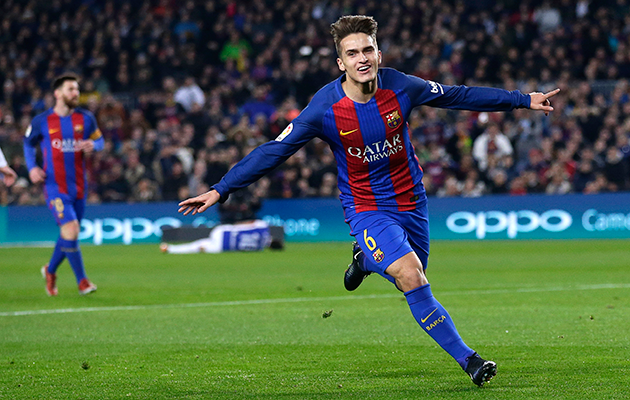 Talented but no wizard…Denis Suarez has been compared to Andres Iniesta.

In the week in which Jorge Sampaoli said that comparing anyone to Messi was like comparing a “very good policeman to Batman,” Luis Enrique was asked if Denis Suárez – scorer of two in two games – could be like Andres Iniesta. “Iniesta is Harry Potter,” he replied.