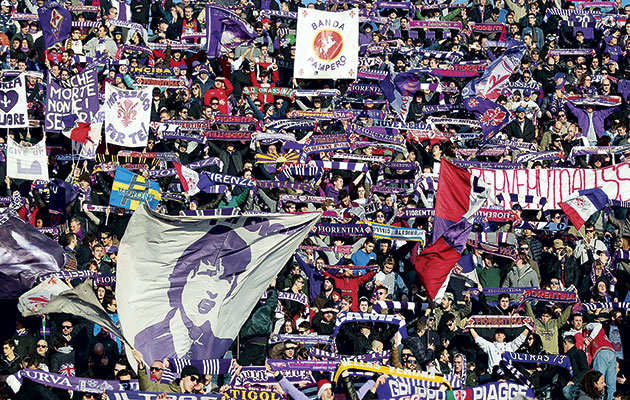 When, in November, Pope Francis became the first pontiff in 30 years to make a pastoral visit to Florence, the matter did not pass unnoticed among Fiorentina fans. How could it? After all, the centrepiece of his day was a public mass held in the Stadio Artemio Franchi, right under the Curva Fiesole – the historic stronghold of the most passionate of La Viola supporters.

In the days leading up to the Pope’s visit, all manner of posters, messages and statements sprouted up around the Tuscan city. In one of them, the Fiorentina faithful urged Francis to “say a prayer for us and help us out with the scudetto”. On another, somewhat irreverently, fans observed: “What a privilege for Pope Francis – to say mass in front of the Curva Fiesole.” 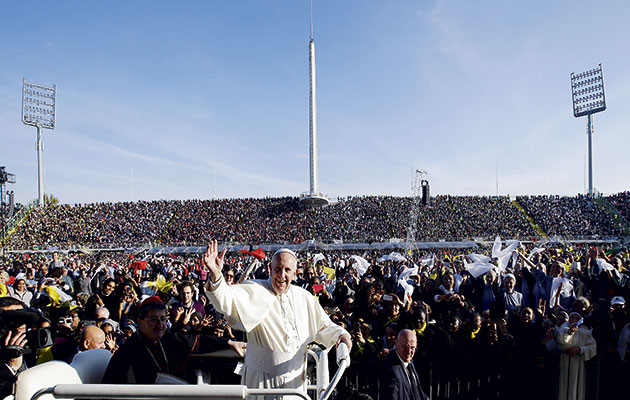 Irreverent humour aside, the point is that these are heady days in Florence.

When Fiorentina took Internazionale apart with a 4-1 win at the San Siro in late September, the club went top of Serie A for the first time since February 1999.

Those were the days when the fate of Fiorentina wrested on the shoulders of
two legends of the post-war Italian game: coach Giovanni Trapattoni and Argentinian striker Gabriel Batistuta.

Florence has always held a very special place in the Italian football psyche. For a start, there are those – including Fascist dictator Benito Mussolini – who argued that the roots of modern-day football are to be found in calcio fiorentino, the 30-a-side unarmed combat that bore a vague resemblance to American football in that the aim was to get the ball over the opposition line. Versions of this game are still played today, although essentially as a tourist attraction.

Football historians tend to reject Mussolini’s theory about the tenuous links between calcio fiorentino and the modern game, pointing out that it had much more to do with the English bringing it with them in the late 19th century as their ships docked in Livorno, Genoa, Naples and Palermo. Nonetheless, the great Renaissance city of Florence – which bore witness to the creative genius of Dante, Cimabue, Da Vinci, Michelangelo et al – still has a special relationship with football.

Fiorentina is different from the clubs of other major Italian cities; not only because it represents a “cradle of culture” city but also because it is the city’s only top-level team. The Internazionale-Milan, Roma-Lazio, Sampdoria-Genoa, Verona-Chievo, Juventus-Torino rivalries of elsewhere do not exist in Florence. Put simply, for the locals it is Fiorentina or nothing – which makes for a very passionate following.

As an example, some 30 years ago, the Curva Fiesole reacted angrily to ongoing tensions between the club and its star performer, Giancarlo Antognoni. With the club threatening to offload an injury-plagued player who was closing in on his 32nd birthday, the curva produced a banner one Sunday afternoon in January 1986 that read: “Dante 1302, Antognoni 1986. Florence you have learned nothing.”

By comparing the player to Dante, the “Supreme Poet” and author of the Divine Comedy who was exiled from Florence in 1302 because of his embroilment in political wrangling with Pope Boniface VIII, Fiorentina fans demonstrated an acutely tuned historical memory and displayed support for a footballer they considered to be part of the city’s rich creative tradition.

In recent times, that faithful following has not had a lot to shout about. Not long after the days when the Batistuta-Trapattoni side was battling for the title, the club went into financial meltdown, was relegated to Serie C2 and suffered the humiliation of losing its name and symbol. For the 2002-2003 season, the club played  in C2 as “Florentia Viola”. By the 2004-2005 campaign, the club not only had its name back but it had also made a lightning return to Serie A – thanks not only to on-field performances but also to what the Italian Football Federation defined as historical “sporting merits”.

Key to the revival was fashion tycoon Diego Della Valle, the owner of luxury leather goods company, Tod’s, who picked up the pieces in 2002 when the club collapsed after the 12-year ownership of cinema producers Mario and Vittorio Cecchi Gori.

Judged on the figures for 2014 – which showed Fiorentina returning an annual loss of €37million – it would seem that the Della Valle family continues to pick up the pieces.

Could it be that in this, a 14th season at the helm, Della Valle – who according to Forbes has a net worth of $1.35billion – will finally see some significant success at his club?

In recent years, especially under coach Vincenzo Montella, the team has often played excellent, attractive football, but over the last 11 seasons their best finish has been fourth. They have had some good European moments, reaching a UEFA Cup semi-final in 2008 and the Europa League semi-final last season, but you have to go back to the 1990 UEFA Cup, when they lost to arch-rivals Juventus, for their last continental Final. And their one and only European title came in 1961, when they beat Scotland’s Rangers 4-1 on aggregate to win the Cup-winners Cup.

This season certainly did not start off looking like it could finally be the one that saw a third league title come to Florence. Montella walked out to be replaced by a coach who not only came from a Swiss club but, much worse, had a distinguished past as a Juventus player no less.

When ex-Basle boss Paulo Sousa arrived in Florence the Portuguese was greeted with stadium posters which went from “Welcome to Hell” to “Hunchback Shit” – for Fiorentina followers, all Juventus fans are gobbi (hunchbacks) because of their excessive good luck. Furthermore, Sousa inherited a squad which had just lost important players, including Joaquin (Betis), Stefan Savic (Atletico Madrid), Neto (Juventus) and Mohammed Salah (returned to Chelsea and then loaned back out to Roma).

On top of that, Genk’s 20-year-old Serb midfielder Sergej Milinkovic-Savic changed his mind after travelling to Florence to sign and put pen to paper with Lazio instead.

At the time, he claimed he was honouring a previous promise to Lazio, but many saw his choice as a clear vote of no confidence in the new-look Fiorentina.

But after pre-season friendly wins against Barcelona and Chelsea, Sousa’s Fiorentina opened their league camapign with a 2-0 home win over Milan and the bandwagon was well and truly rolling.

With Sousa proving himself to be perhaps the most elegant coach in Serie A, his side made a statement of intent in the San Siro against league leaders Inter.

Fiorentina’s demolition job might have owed something to an uncharacteristic third-minute error from Inter’s Slovenia goalkeeper Samir Handanovic, which saw him concede a penalty that was converted by his compatriot Josip Ilicic, but after 23 minutes Inter, who had conceded only once in five games, were 3-0 down. In the end, Fiorentina ran out ridiculously comfortable 4-1 winners to go top of the table.

Fiorentina remained in the top three for the rest of the year and led the table on five occasions, although there have been 2-1 defeats by Napoli and Roma, and an emphatic 3-1 loss to Juve. That defeat, in particular, seemed to indicate limitations in Sousa’s attractive, smooth passing, tiki-taka game. Even though Fiorentina had 62 per cent possession, Juventus found the back of the net three times, while Fiorentina’s only real shot on goal was Ilicic’s early penalty. 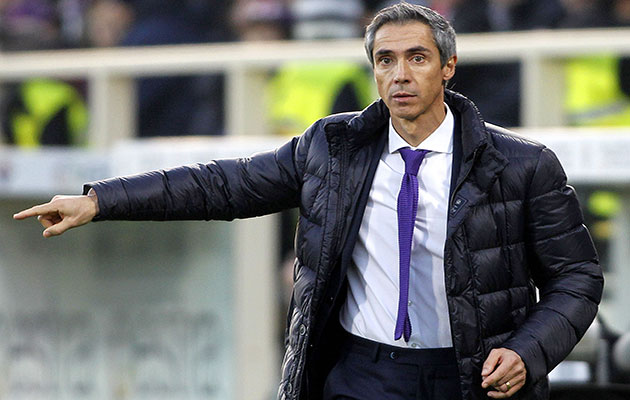 After a hostile reception, Paulo Sousa has won over the Fiorentina fans.

Sousa has built a splendid team at Fiorentina. Ciprian Tatarusanu is steady in goal, while Gonzalo Rodriguez and Facunda Roncaglia, alongside Italy international Davide Astori, look solid in defence. In midfield, nippy Federico Bernardeschi is one of the revelations of the season, Matias Vecino is the perfect “hewer of wood and carrier of water”, with Poland international Jakub Blaszczykowski adding a wealth of Bundesliga experience.

Playing in front – and sometimes behind them – is inspirational Spanish schemer Borja Valero, who along with the rejuvenated Ilicic supplies the ammunition for Croat striker Nikola Kalinic, who has been arguably their most important player so far this season.

Yet for all the quality of this team, the suspicion remains that Fiorentina may simply be too short on strength in depth to challenge for the league title. If one or two key players were to be injured, Sousa could well have difficulty replacing them.

If the title proves a step too far, a Champions League place with a top-three finish is not out of the question. Furthermore, having reached the semi-finals of the Europa League last term, they will fancy another long run in the competition – if they can first overcome Tottenham Hotspur in the round of 32.

The fans feel that this really could be Fiorentina’s year. And with the backing of Pope Francis, who’s to say it won’t?