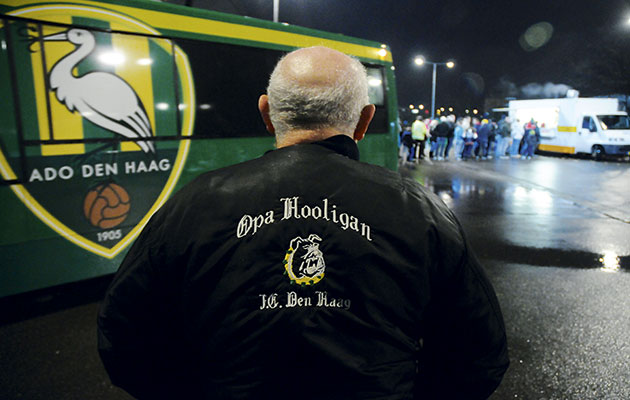 Inside a green-and-gold coloured coach, parked outside the Kyocera Stadion – home of Eredivisie side ADO Den Haag – Jacco Van Leeuwen counts the packets of pasta, cookies, soup, marshmallows, sugar and powdered milk piled up around his feet.

“Every year ADO Den Haag is doing a lot for the poor and sick people,” says Van Leeuwen, who is chairman of the club’s supporters association, as he takes charge of yet more bags donated by fans on their way to that evening’s league game against Willem II, the last before the winter break.

The supporters were collecting for a food bank that would distribute the packets to the local poor. In total, 451 separate packages covered the floor. “In this rich country, that so many people need to use the food bank, it’s not right,” adds Van Leeuwen disapprovingly. Many people, he explains, had volunteered to help refugees in recent months, making it harder to attract donations for the Dutch poor already here. “Whether they were born in Turkey or Suriname or Holland, it doesn’t matter.”

Den Haag’s supporters have a fearsome reputation, possibly only eclipsed by those of Millwall in England when it comes to a history of violence and skulduggery. In 1982, they burned down their own stadium, the old Zuiderpark. Yet the club has always maintained strong links with the area’s overwhelming white, working-class population.

“You want to do something,” claims Van Leeuwen, before the coach is driven away and he leaves to take his seat in the stadium. “Besides, football is a way of life. Not just a match.”

The talk on the supporters’ coach and in the stadium wasn’t about the food bank, nor the game that was about to kick off in the middle of a storm. It concerned the club’s own sudden and unexpectedly bleak financial future – and the whereabouts of Chinese owner, Wang Hui, who bought a 98 per cent stake in 2014 for £6.8million with much fanfare 18 months previously.

The club may not have won the league since the end of World War II, and never during the modern era, but Wang Hui – a wealthy Beijing-based patent lawyer with his own law firm who had recently moved into sports marketing – promised to turn the 110-year old club into a powerhouse. Den Haag (the Hague) was an international city, he reasoned, and it deserved an international football club.

Money, players and prestige would see ADO challenge the dominant trio of Ajax, PSV and Feyenoord, who between them have won the league on all but three occasions over the past 35 seasons.

But after an initial flurry of appearances Wang was nowhere to be seen, leaving a series of missed payment deadlines that could lead the Dutch federation, the KNVB, to place the club in special financial measures. It also left many fans, including Van Leeuwen, confused and angry.

“In Den Haag, the character of the people is that when you don’t like it, you say it directly,” he says. “You don’t hide. So we have a rough reputation.

“He promised European football, so everyone was very happy with him. We showed a banner with Wang on it.”

But after meeting Wang last year, and being impressed by him, the supporters’ patience is now wearing thin. “These problems have changed people’s mind,” says Van Leeuwen”

It has been a busy season for the KNVB, reflecting both the changing nature of football club ownership in Europe, and the difficulties that small and medium-sized football leagues are having competing with the financial muscle being flexed in England, Germany and Spain.

When it comes to ownership, Dutch football does not have the same rules as Germany, with its much-vaunted 50+1 rule. Wholesale foreign takeovers are allowed, but the KNVB keeps a close eye on the financial situation at all its professional clubs.

To receive a licence to play, a club needs to submit its accounts for scrutiny and approval. It is then given a rating from one to three. A rating of three means the club is in fine financial health. Two means some work needs to be done. Category one is reserved for the worst cases, where the KNVB has to intervene so that a club follows an approved plan to become solvent. If they don’t follow it, the club
risks losing points – or even its licence.

Twente – one of the few clubs to win the title outside of the big three over the past 35 years, under Steve McClaren in 2010 – are currently the highest-profile category-one club. Their success, which included access to the Champions League, could only be sustained with increased investment. When they failed to win the league the following season, losing to Ajax on the final day of the campaign, the club fell into deep financial trouble. So much so that chairman Joost Munsterman – a businessman from Enschede who made his fortune in publishing and bankrolled his home town club’s success – sought other sources of finance.

Twente entered into a third-party ownership (TPO) deal with Doyen Sports Investments, the controversial investment vehicle which owns Neymar’s sponsorship rights and held a percentage in Chelsea’s on-loan striker Radamel Falcao. Twente borrowed €5m against future sales of their top players, including Dusan Tadic, who would later move to Southampton.

But when a mysterious website called “Football Leaks” – based in Portugal but operating from Russian internet servers – released documents related to the deal between Twente and Doyen, it became clear that the deal effectively gave Doyen control of Twente’s transfers, which is against both KNVB and FIFA rules.

FIFA has banned TPO – the deal between Doyen and Twente was signed before the ban – while the KNVB came down hard on the club. An independent commission found they had deliberately misled the KNVB. They were fined £35,000 and banned from European football for three years, while also being placed under even tighter financial measures and told they would certainly lose their right to play in the league if they err again. They currently sit third from bottom in the Eredivisie.

ADO are presently rated as a category-two club but that is likely to change and they could soon find themselves in a similar situation to Twente. A promised £3.1m investment for the coming season, which the club said it had agreed with Wang, did not materialise. The club held a press conference, declaring that it was looking at a £1m liquidity crisis and admitting that they had not been able to contact Wang for weeks.

The uncertainty left many people in the city unhappy. “You cant run a football club on a daily basis from Beijing,” says local politician Tom De Bruijn, a member of the Den Haag municipality – who own the stadium and have a golden share in the club. That golden share gives the municipality the right to block any takeover, but only if they can present a rival bid offering the same amount. When the municipality couldn’t pull together a consortium of local businessmen in time – their “preferred choice” according to De Bruijn – the Wang deal went ahead. 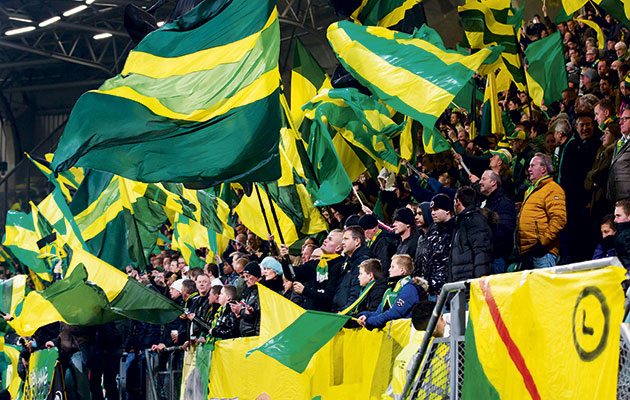 Den Haag fans have looked on helplessly as the club’s financial problems went from bad to worse.

In the months that followed, Wang was a regular fixture in Den Haag. He had bought the club, in part, to tap into its international reputation, as well as Holland’s reputation for coaching. He had hoped to take ADO coaches to Beijing to work with young players at the former school of current Chinese premier Xi Jingping, a huge football fan who visited Manchester City while on a recent state trip to the UK.

Shortly after the trip – which saw former Chinese international Sun Jihai controversially inducted into the National Football Museum Hall of Fame alongside George Best, Bobby Charlton and Kenny Dalglish – City were recipients of a £235m investment from a Chinese consortium.

Wang, meanwhile, would be seen at Den Haag’s games, celebrating wildly. On one occasion he trained with the first team and even presented the Dutch PM, Mark Rutte, with an ADO shirt during a trade visit to China. But then the phone calls suddenly stopped and emails went unanswered.

“It is extremely difficult to communicate,” says De Bruijn, who adds that the club’s supervisory board had a Chinese member who has never been there. “We don’t know if he even exists!”

While De Bruijn believed the impasse would be solved, others were less sure.
In one interview former national coach Dick Advocaat, who had initially been approached by Wang to take an advisory role at the club, called for the “Chinese influence” in ADO to come to an end.

At the Willem II game there were no chants against Wang, nor any banners. The supporters kept their powder dry so not to anger him. Van Leeuwen even wrote a polite open letter to Wang, inviting him to a meeting with fans the following week to explain what was going on. After all, there was virtually no chance that ADO could compete with the big three without him. “Yes, I think he will be here next week,” said Van Leeuwen hopefully when asked whether he thought the letter might work.

A few weeks later, early in the new year, the Kyocera Stadium is bathed in the harsh light of a low sun. Snow still covers the floor from the previous night’s flurry as fans take their seats for the game against Ajax.

This fixture is considered one of Dutch football’s highest-risk games due to past violence – not to mention racist and anti-Semitic chants. Ajax fans have been banned for more than five years. And Wang wasn’t there either. The money wasn’t paid and he certainly did not turn up for his proposed meeting with Van Leeuwen and the rest of the Den Haag  supporters’ group.

The club announced it would have to scale down its ambitions to balance its budget and prevent being labelled a category-one problem by the KNVB.

“Well, obviously at this time it is not very clear,” coach Henk Fraser said when asked whether he had any money for transfers. “It seems like we will have to sell first.”

The status quo remained on the field, as Ajax beat ADO 1-0. Any illusion Den Haag could still compete with what improvements they gained in the summer, when Wang’s money promised a different future, were gone. Instead of looking towards Europe, the club’s future was now uncertain. But it’s the same for many Dutch clubs.

Teams from Holland once dominated European football and their players filled the squads of the continent’s top teams. But it is nearly 21 years since Ajax were the last Dutch side to be European champions. These days, the performances of Eredivisie teams in the Champions League have been so bad that the country is in danger of losing its automatic qualification spot in the group stage.