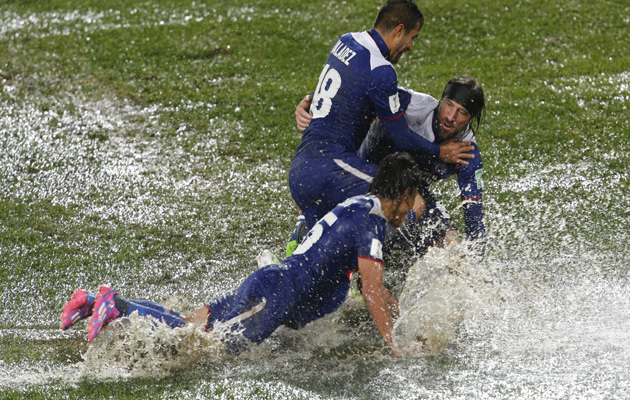 Sociedad took the lead within just three minutes, with Carlos Vela heading home from a Chory Castro cross. However, Oscar De Marcos levelled the scores with a volley from a Markel Susaeta cross.

Precious little to cheer about for Parma – who were docked a point last week for failing to pay their players’ wages. A goalless draw at home to fellow Serie A strugglers Cagliari, who are two places and six points ahead of their hosts.

Parma remain rooted to the foot of the table, a point behind Cesena, but six points adrift of safety.

There was to be no domestic and continental double for River Plate. The Buenos Aires outfit required a win in their final game of the season and for rivals Racing Club to drop points against Godoy Cruz, to add the Apertura title to their Copa Sudamericana success.

However, Racing Club beat Godoy Cruz 1-0 in their final match of the championship in Avellaneda on Sunday.

Both teams qualified for next season’s Libertadores Cup, as do Boca Juniors.

Liverpool were left to rue a series of missed chances in their 3-0 defeat to Manchester United on Sunday. Rheem Sterling in particular was wasteful in front of goal as United recorded their 6th win in a row. Without particularly playing very well, Louis Van Gaal’s side have developed the happy knack of winning matches.

With Liverpool out of the Champions League, 18 points behind Premier League leaders Chelsea, the pressure on manager Brendan Rodgers continues to grow.

Third placed Augsburg have been one of the surprise packages of the Bundesliga season. Ahead of the Bavarian derby against Bayern Munich they sat in 3rd place in the table and coach Markus Weinzierl spoke confidently of causing an upset against the runaway leaders. It wasn’t to be: a humbling 4-0 home defeat brought Augsburg back down to earth.

For unbeaten Bayern, the lead at the top of the table is now nine points.

After winning the J.League title last weekend to add to their League Cup triumph, Gamba Osaka have completed Japan’s domestic treble by beating Montedio Yamagata 3-1 in the Emperor’s Cup final.

Gamba became only the second side to achieve the Japanese treble since the J.League was launched in 1993, with Kashima Antlers having done it in 2000.

Brazilian forward Lima scored twice to give champions Benfica a 2-0 away win over Porto in the first Portuguese Classico of the season on Sunday.

It was Benfica’s first away win over their great rivals in the league for seven years in a match which featured only one Portuguese player, Benfica’s Andre Almeida, at kick-off. The victory extended the champions lead at the top of the table to six points

New Zealand minnows Auckland City will face the champions of South America in the semi-final of the Club World Cup after pulling off a second shock victory in the space of four days.

They now face South American champions San Lorenzo for a place in the final.

In the other quarter-final, Western Sydney Wanderers came within two minutes of a unlikely Club World Cup semi-final meeting with Real Madrid, before losing 3-1 after extra time to Cruz Azul.

The game was played on a waterlogged pitch and with Wanderers reduced to nine men in extra-time, they were unable to hold on for penalties against the Mexican side.