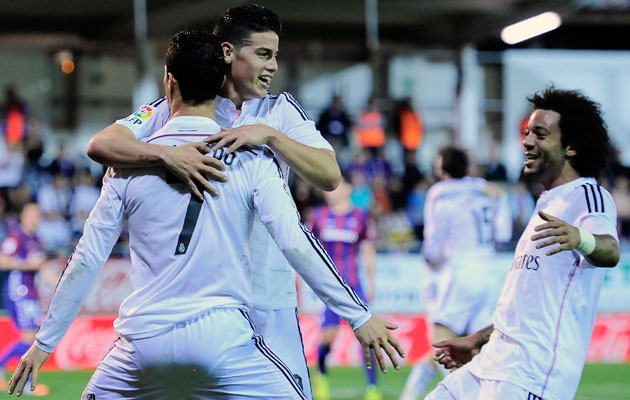 Real Madrid will set a new club record of 16 successive wins in all competitions if they beat Malaga in La Liga.

Saint-Etienne host Lyon in the Rhone derby with both sides in good form, but “Les Verts” haven’t won at home to their Ligue 1 neighbours in 20 years.

The Greek Super League resumes after matches were suspended last week following an attack on a referring official. Christoforos Zografos, who is the assistant director of the Central Refereeing Committee, was beaten with wooden clubs by two men in Athens.

Al Ahly of Egypt, who are African football’s most successful club side of all time, visit Sewe Sport of the Ivory Coast in the first leg of the CAF Confederation Cup Final.

Racing Club could clinch the Apertura title if they win at Rosario Central and River Plate and Lanus fail to win their respective games, at home to Banfield and Boca Juniors.

The second legs of the MLS play-offs take place this weekend. In the Eastern Conference, New England Revolution will defend a 2-1 lead against New York Red Bulls, while in the Western Conference, Seattle Sounders will hope to overturn a 1-0 deficit when they face LA Galaxy.