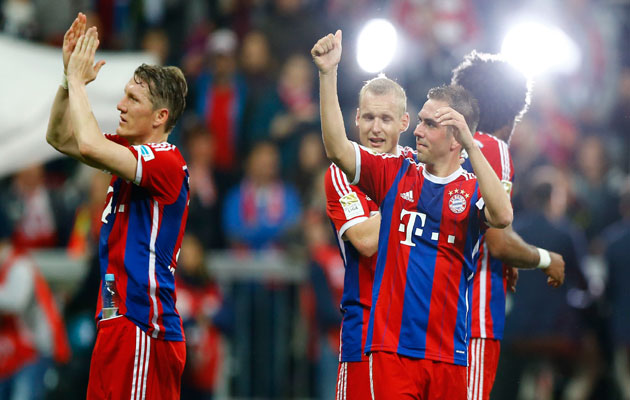 Can Napoli overhaul Roman duo in race for Champions League?

With Roma going down 2-1 at Internazionale and Lazio held to a 1-1 draw by Chievo, the stage was set for Napoli to close the gap in the race for the Champions League places. A 4-2 win over Sampdoria moved Rafa Benitez’s side to within touching distance of the Roman duo. With six matches remaining and only two Champions League spots available, the three sides are now separated by just two points.

Can Espanyol upset the odds in the Derbi Barceloní?

Espanyol’s record against their local rivals has been lamentable in recent years. Without a win at home in the past 12 seasons, Sergio’s side were looking to turn the tide on recent history. It wasn’t to be – Barcelona, through goals from Neymar and Lionel Messi secured a comfortable 2-0 win which keeps them on course to win the Spanish title.

Will Bayern Munich complete a hat-trick of titles?

• Bayern Munich did indeed seal their third successive Bundesliga title. Wolfsburg’s 1-0 defeat to Borussia Monchengladbach on the back of Bayern’s 1-0 win over Hertha Berlin, gave Pep Guardiola’s side an unassailable 15 lead with four matches remaining.

Will Portugal showdown be a title decider?

• The goalless draw was something of an anti-climax with Porto, perhaps still reeling from their 6-1 midweek drubbing to Bayern Munich, unable to get the better of the league leaders. The result means that Benfica remain three points clear at the top of the standings with just four matches to play.

Who will win the all-Kiwi clash?

• The all-Kiwi OFC Champions League Final on Sunday was won by Auckland City after they defeated Team Wellington in a penalty shootout following the sides’ 1-1 draw. As a result of Saturday’s triumph, Auckland City are off to a seventh Club World Cup finals.

Who’s the top man in England this season?