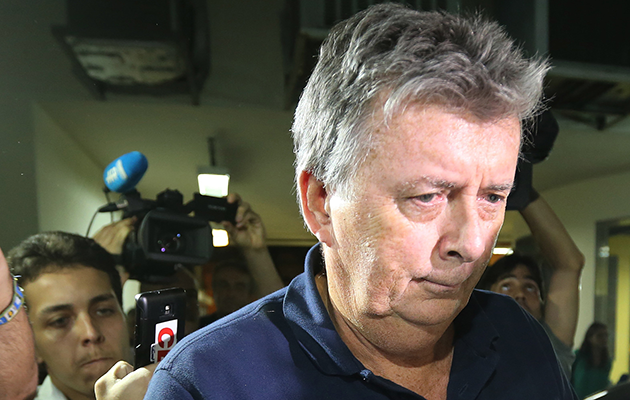 Ray Whelan is innocent. It’s official. The Brazilian case against him for ticket touting has finally been kicked out of court.

But it took the English travel specialist more than two years to clear his name since being arrested during the 2014 World Cup finals.

Byrom, the FIFA ticketing and hospitality partner, remains frustrated and angry at the way its man was hung out to dry in front of the worldwide media by police and prosecutors in Rio de Janeiro.

Whelan also believes the Brazilians may have had their own agenda for creating a distraction from the way the host team collapsed after the government, controversially, had invested so much money in playing host.

Hence he was arrested in early July 2014, detained in infamous Bangu prison for a fortnight, bailed to house arrest and finally allowed home in November 2014 after Match guaranteed his return for any possible trial.

Whelan’s treatment has been echoed lately by the manner in which Brazilian prosecutors and police have treated Irishman Patrick Hickey, the senior Olympic official who was also accused – wrongly, he has insisted – of illicit ticket dealing.

A relieved, vindicated Whelan explained: “The judge threw the case out in February last year, calling the police inept and the prosecution guilty of institutional cowardice. But the prosecutors and police tried to keep it in the system for as long as possible to save their faces.”

Finally, on September 30, the case was thrown out once more and now the time has passed for any further appeals so Whelan, as he said, has “full and final closure.”

The psychological pressure exerted by the Brazilian law enforcement agencies was relentless.

Their modus operandi involved – and, as the Hickey case shows, continues to involve – making a media circus out of the arrest then imprisonment to imply guilt in grisly conditions and all the while spinning the prosecution case unchallenged.

Whelan, reflecting on how he coped, said: “It’s all about highs and lows. They have one appeal go down the drain but then you find out they have 15 days to file another.

“And they always wait until the last day. It’s as if it’s part of their mental torture to prolong it as long as possible . . . making it traumatic for me, my friends, my family and the company.

“It’s like a mental roller coaster when you know you didn’t do anything wrong but the rest of the world is being given a totally wrong impression — even though it’s down in black and white and sound-recorded because the [phone tap] was clarification that what I was doing was totally within our company remit.

“I’m stronger, I hope, because of it but it’s been particularly difficult for my daughter-in-law because she’s Brazilian. She knew the truth but it’s difficult when a media circus turns a nation against you.

“I had people calling me the ‘most wanted man in Brazil since Ronnie Biggs.’ It was like, if the Pope had been assassinated it would have been down to me. They called me a major mafioso.

“It was out of control but I suppose it served a political purpose for the Brazilian or Rio governments because their team had just been beaten 7-1 [by Germany in the semi-finals].

“Not only had they all invested in the World Cup but the team were expected to win it. Almost as if they didn’t think they’d even have to play. All they had to do was turn up to win it. And they weren’t just beaten, it was 7-1. It shattered the national psyche.”

The price Whelan and Match paid was in damaged personal and corporate reputation, life under a court cloud for two years and the memory of 24 days in jail.

His recall is clear. Whelan said: “I was in a cell on my own for 23 hours a day for first 272 hr. I had no darkness. The light stayed on in the cell. In the end I managed to get them to put the light out.

“There was one hour a day exercise and no communication at all. There’s no phone for prisoners to share. So you just don’t know what’s happening. At least my lawyer was there every few days and my family came several days a week.

“I had a cell to myself at least. There were three guys in the cell opposite me, two in the cell next to me.

“Their crimes varied. One had been holding up a sign saying ‘Tickets please’. The guys next to me were up for major credit card fraud and the guy diagonally opposite was the lad who let off the smoke bomb when a policeman died.

Now, Whelan is back on the road, not intimidated by events in Brazil, to return to work for the family company which has been partnering FIFA since 1986 and is contracted through to Qatar in 2022.

He said: “I’ll be going to Soccerex in Doha this week. I’ll be letting the football world see I’m still alive and kicking. Finally we’ve been able to draw a full line under the process . . . Whether it’s a full line for me mentally you never know.”