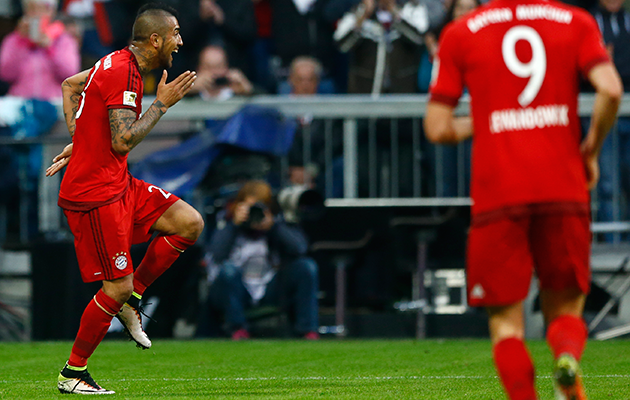 1. Bayern Munich’s new driving force
If Bayern are the classic steam locomotive powering majestically on towards Bundesliga and Champions League glory, the role of fireman, the man who shovels in the coal, very much has passed to Chilean big beast, Arturo Vidal.

Whether deployed as the midfield enforcer or further forward in the engine room, the heavily-tatooed Latino has developed of late into the team’s indispensable keeper of the flame, resolute, dynamic, creative and decisive, scoring in both legs of the Champions League quarter-final victory over Benfica and providing a goal and an assist in Saturday’s 3-0 romp against Schalke at the Allianz-Arena.

Vidal, bought for a cool 37 million euros last summer from Juventus, took a long while to settle in Bavaria, hampered by his own impatience and incomplete pre-season due to Copa America commitments. But certainly is making up for lost time now. He must watch his step, though. In a recent game in Stuttgart, he committed so many fouls in quick succession that he was substituted after just 26 minutes. Hauled off before being sent-off.

“Arturo naturally will never lay down, but it was the right decision to withdraw him,” opined Bayern director of sport, Matthias Sammer.

2. ‘Neverkusen no more
Infamous for stumbling in the final few weeks of a season, Leverkusen finally appear to have found a cure for their usual springtime insomnia, winning five consecutive games – the latest coming on Saturday courtesy of a comfortable 3-0 victory over a hapless Frankfurt – not conceding a goal in 483 minutes and leaping into the automatic Champions League qualifying spots.

Only high-flying Bayern and Dortmund have accumulated more points in the Spring Championship so far and unlike their closest rivals (Hertha Berlin, Gladbach, Wolfsburg, Schalke and Mainz) who all lost at the weekend, the Werkself have the all-important momentum.

Hats off to coach, Roger Schmidt for seeing the light, for swopping the chaos and frenzy of full-on attack for an approach more reliant on control and defensive solidity. A case of compromise cutting through. 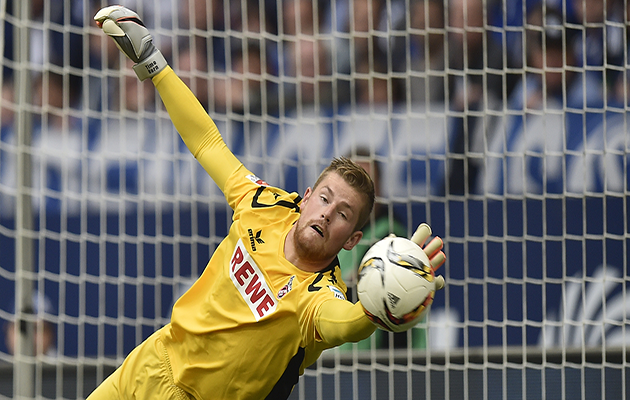 Nerves will be jangling for the next few days in Köln as Germany Under 21 keeper, Timo Horn, weighs up his stick-or-twist options. While the youngster is under contract until 2019, a release clause in his current deal allows him to leave for a cut-price nine million euros during a short end-of-term window, which is rumoured to run out at the end of this month.

Liverpool scouts have been taking notes on almost a weekly basis and though Köln general manager, Jörg Schmadtke, says he is confident of keeping him on board, Horn is desperate to play in European club competitions and knows all too well he would need divine intervention for that to happen at the Müngersdorfer.

After three excellent seasons in charge of the ‘Schanzer’ – taking them from the bottom of the second division to elite respectability – the 48-year-old Austrian apparently thinks he has nothing left to prove at the once-unfashionable Bavarians and is reported to have held talks with RB Leipzig, the nouveaux-riches easterners who stand on the verge of promotion to the German top-flight.

Nor are RBL alone in their pursuit of the catenaccio king. Unidentified Bundesliga and overseas outfits are in the hunt too. And despite being under contract to FCI until 2017, Hasenhüttl is perfectly happy to come clean about the state of play.

“I don’t know why people always link me with RB,” he said. “Other clubs have spoken to me.”

In a weekend when a group of Köln ultras again turned ugly, going on the rampage in Mainz, the other side of the supporter coin was provided by followers of Werder Bremen.

Frustrated by their side’s relegation woes, the Green-and-White faithful could have turned up for Saturday’s home clash with Wolfsburg in sullen, depressed mood. But instead chose to emphatically get behind their boys, setting the tone a couple of hours before kick-off by waiting en masse to greet the approaching Werder team bus, pumping up the volume and singing their own version of the Oasis tune, Wonderwall.

“The atmosphere created here today was enormously helpful to us,” declared Bremen coach, Viktor Skripnik after his side’s morale-boosting 3-2 win.

“The support we had was crazy. It gave our performance extra percentage points.”

Werder remain in the bottom-three. However where there’s life, there’s hope.