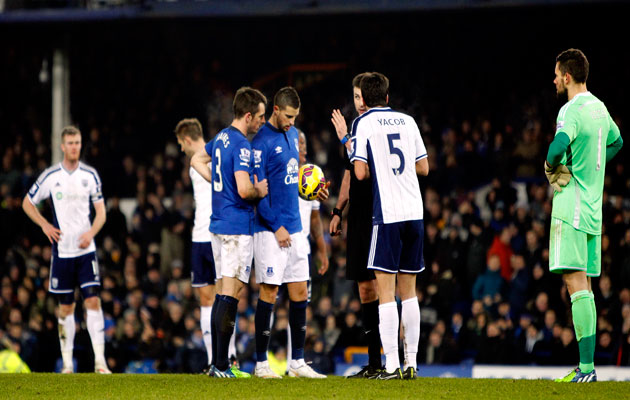 Baines, who has a non-too-shabby record of 15 penalties converted from 16 attempts, kicked up little fuss. Mirallas proceeded to send his spot-kick wide.

It was the closest Everton came to score as the game petered out to a disappointing 0-0 draw.

It’s not the first time team-mates have argued over which of them should take a penalty. Indeed, as you can see from following examples, the lack of dissent shown by Baines at being usurped was quite unusual.

Jonathan de Guzman v Nathan Dyer 2013
Swansea’s Capital One Cup final victory in 2013 over Bradford brought them their first major trophy, but not everybody was happy that day.

When the Swans were awarded a second-half penalty with teh score at 3-0, winger Nathan Dyer, on a hat-trick, felt he should have been given the honour.

But team-mate Jonathan de Guzman picked up the ball and a long row ensued.

Paolo Di Canio v Frank Lampard 2000
As a player or indeed manager, there are few players (or officials) Paolo Di Canio has not rowed with and so it should come as no great surprise to see his name appear on this list.

Back in 2000, when still with West Ham, Canio clashed with a youthful Frank Lampard over taking a penalty against Bradford City (what is it about them that brings out the worst in opponents). Di Canio, the senior player, was never going to lose this confrontation.

Arjen Robben v Thomas Muller 2013
Arjen Robben, like Di Canio, is another player synonymous with the word ‘petulant’. So you can imagine how well he took it when Bayern Munich coach Pep Guardiola prevented him from taking a spot kick in favour of Thomas Muller in a 4-1 win over Mainz.

Days later the Dutchman was still sulking, so much so that he refused to take a spot-kick in Bayern’s next game Viktoria Plzen – this, despite Guardiola imploring him from the touchline to do so.

Both players were booked after a prolonged confrontation which involved much pushing and shoving, though thankfully no punches thrown.

Mercifully, for the protagonists, in all bar one of these rows the resulting penalties were converted.

The only exception was Mirallas whose reward for his show of confidence/arrogance (take your pick) was to be substituted shortly afterwards.