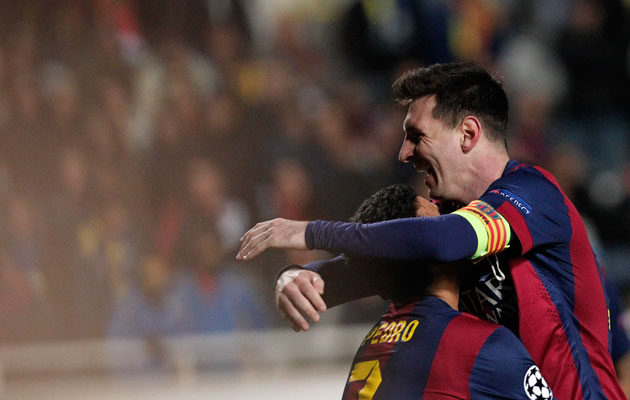 Lionel Messi
Like the proverbial London bus, you wait ages for Lionel Messi to break a goalscoring record and then another one falls along at the same time.

Just three days after breaking the all-time La Liga scoring record, Messi surpassed the total of 71 set by Raul in the Champions League. A hat-trick in Barcelona’s 4-0 win over APOEL in Cyprus took the Argentinian to 74 goals – three ahead of Raul and 4 clear of Cristiano Ronaldo whose Real Madrid side face FC Basel tonight.

It was Messi’s fifth hat-trick in the Champions League – another record – and takes him two clear of Luis Adriano, Filippo Inzaghi and Mario Gomes, all of whom recorded three. For the record, Cristiano Ronaldo is one of 11 players to have scored two hat-tricks in the competition.

Copyright issues prevent us showing Tuesday’s hgat-trick, but here are the previous 71 goals.

BATE
With one game still to play, the Belarusian side have conceded 22 goals in their Champions League group, equalling the previous worst record, shared by Dinamo Zagreb and Nordsjaelland. Tuesday’s 3-0 home defeat to Porto took them to a share of that unenviable record.