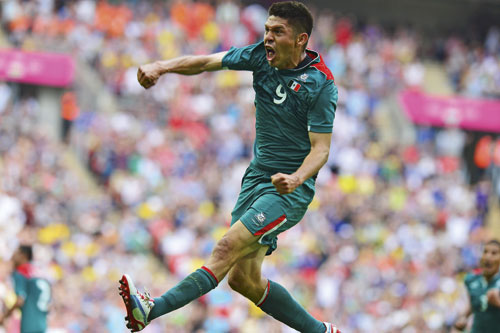 Oribe Peralta’s story is one of riches to rags and back to riches again. From being considered one of the greatest proteges in Mexican football, he was deemed a complete failure a few years later, only to bounce back and become the hero of El Tri’s biggest achievement at the 2012 Olympics.

After making his first start in the first division in 2003 with Morelia, Peralta was transferred to Monterrey the following year and scored nine goals in 40 games, mostly coming off the bench. Aged just 20, hewas considered one of the players with the most potential in Mexican football – to such an extent that Spanish newspaper Marca dubbed him the “Mexican Ronaldo” in an article on Latin American talent.

However, the striker struggled with consistency and, little by little, as often happens in Mexican football, his coaches chose to hire foreign stars of proven quality rather than sticking with talented but raw youngsters. Peralta failed to make his mark in Monterrey and then later at Santos Laguna. In 2009 he was loaned to modest southern club Jaguares de Chiapas in what seemed the prelude to an early demise in the lower tiers of the league.

However, away from the limelight, Peralta flourished. He scored 12 goals in 35 games and, when the loan deal was finished, Santos Laguna decided to recall him.

Despite this, the announcement Peralta would be one of Mexico’s “overage” players at London 2012 was greeted with scepticism. While it was true that he was one of the three players aged over 23 who had appeared for the same team during the 2011 Pan American Games – in which he was top scorer with six goals – his Olympic call-up owed everything to Manchester Utd manager Alex Ferguson’s reluctance to release Javier Hernandez.

At the start of the tournament Peralta seemed to give reason to his critics with unconvincing performances against South Korea and Gabon. However, Luis Fernando Tena, who had been his coach at Jaguares, never doubted the striker’s ability and he responded by scoring against Switzerland. That goal gave Mexico their ticket to the quarter-finals and he then provided the vital strike against Japan in the semi-finals.

The true moment of glory came in the Final against Brazil. His two goals will be forever written in the memory of Mexican football and were a microcosm of his talents: a superb strike from outside the box in thefirst minute and then a perfect header when Brazil seemed to be close to an equaliser.

From that moment, Peralta’s life changed forever. People cheered him in the streets and national coach Jose Manuel De la Torre had to change his 4-2-3-1 set-up to 4-4-2 to accommodate him next to Hernandez. When the new system proved ineffective,it was the United man, not Peralta, whohad to watch from the bench.

After the Olympics, Peralta stated that he wanted to go to Europe, but the offers Santos Laguna received were considered too low. At 28 he is at the top of his game and, if he keeps that form during the Confederations Cup in June, the big boys will surely return.