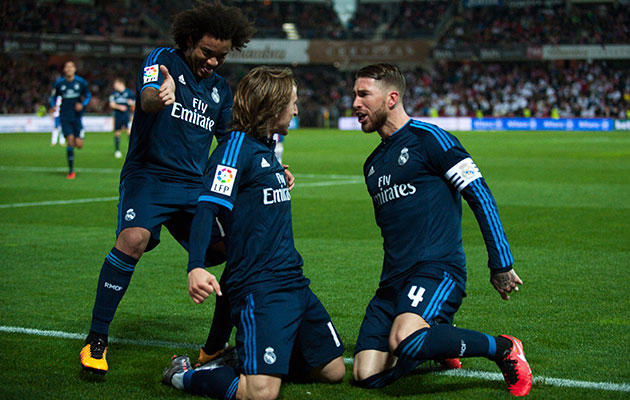 The Croat midfielder lashes home from the edge of the area to secure a late winner for Real Madrid in their hard fought victory over Granada.

Making his home debut for Roma following a loan move from Genoa, Perotti shows superb technique to volley home from the edge of the area.

It’s a trademark Leicester break and the ball reaches Mahrez who skips over one challenge, bamboozles another with a neat shimmy, before firing home past Jo Hart. The goal helped the unlikely Premier League leaders to a remarkable 3-1 win over their closest rivals Manchester City.

A terrible clearance falls at the feet of Jallet and he takes one touch before curling in an unstoppable left footed effort from the edge of the penalty area.

Astonishing piece of skill by Ricardinho to flick the ball up and over his opponent’s head, before controlling it on his chest and firing home. Who cares if it’s not real football as we know it – it’s a memorable effort by the Portuguese from this year’s Futsal Euros.