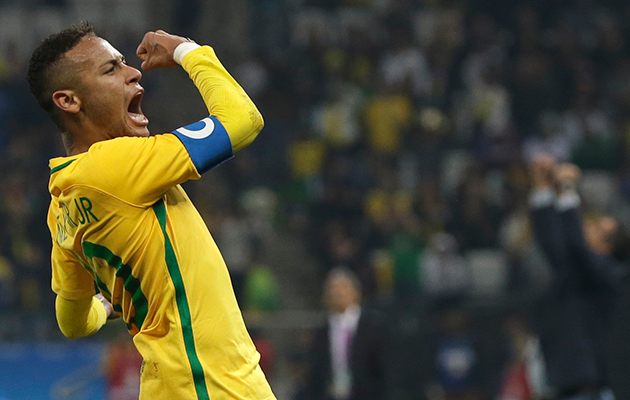 Tomorrow: Marta. Wednesday: Neymar. The magnetic allure of Brazilian football has always rested on individual stardust. This may be a team game but no other country has ever managed such a victorious synthesis of star quality in the service of the greater good.

The history of Brazilian football is marked by eras of superstars. Arthur Friedenreich in the 1920s, Leonidas in the 1930s, Zizinho, Ademir and Jair in the 1940s, Pele and Garrincha (Didi, Nilton Santos, Glmar etc) in the late 1950s and 1960s then Jairzinho, Tostao, Rivelino in the 1970s.

Later came Romario and the original Ronaldo but the latter’s powers were savaged by injury and, as Brazil’s last World Cup triumph faded back into the mists of memory (2002) so the delicate balance collapsed. The wholesale emigration of players good, bad and indifferent to European football certainly contributed.

A chasm opened up between the Selecao and the torcida.

Luiz Felipe Scolari appreciated it. When he took over as national coach at the end of 2012 he determined two priorities as building a team to be competitive at the 2014 World Cup (he never said ‘win’ it) and re-engaging the affections of the fans. He was successful up to a point . . . which was the 7-1 disaster against Germany in the astonishing semi-final in Belo Horizonte.

Appointing Dunga as successor was a backward step and further failures in two Copa America tournaments were echoed in the boardroom by scandal-laden events at the heart of the CBF with the FIFAGate detention in the United States of ex-president Jose Maria Marin and his succession by a man in Marco Polo del Nero who appears bound for a long ethics ban.

A challege for redemption thus fell on the shoulders of Brazil’s footballers at the curren Rio 2016 Olympic Games: both men and women. Indeed, it says much about the rock-bottom morale within the national team milieu that it was the women who earned the cheers in the group stages.

Frustration with the manner in which Neymar and Co stumbled along was perfectly illustrated by the photograph of a youngster with a No10 replica shirt who had scrubbed out the name of ‘Neymar’ and written in ‘Marta’ instead.

Tomorrow Brazil’s women come to Maracana for a semi-final against Sweden. In Group E they disposed of China (3-0), these same Swedes (5-1) and were content to be held in an academic third outing by South Afica (0-0). Next up came the 7-6 shootout victory over Australia after a goalless extra-time drama in Friday’s quarter-finals. 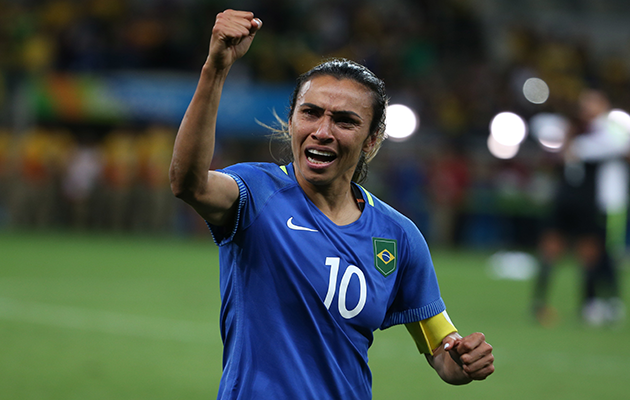 Brazil women’s team will look to Marta to lead them to Olympic glory.

The exit of the United States’ grumpily underwhelming Olympic champions has turned Marta – arguably the greatest woman player ever – shootout heroine Barbara and their sisterhood into favourites not only tomorrow but for the gold medal. Germany or Canada will provide the opposition in Friday’s final, also in Maracana.

Yet . . . however successful the women, the social context in Brazil means a first gold medal for the men is immeasurably more important. This is a country which has never bothered to invest in organising or developing the women’s game. Their success is rather like the Olympic Games themselves, a fortnight’s fun distraction from the tough business of life here.

Hence the extremes of fan emotion, veering between wild optimism and depressed pessimism.

The men benefited from wholehearted support in the first halves of the two goalless draws against South Africa and Iraq in Brasilia last week but then jeers, boos and – most humiliatingly – laughter after the intervals. Finally the goals exploded: four against Denmark then two more against Colombia on Saturday in Sao Paulo’s quarter-final.

Winning at football demands many ingredients. One is the bounce of the ball when it matters most. With perfect timing Brazil, on Wednesday in Maracana, must face rank outsiders Honduras.

The central Americans are still blinking in the shocking sunlight of such historic progess. Goalkeeper Luis Lopez was their hero in Saturday’s surprise defeat of 2012 bronze medallists South Korea. Maracana should surely be a step too far.

Then Brazil would be building even greater momentum to confront free-scoring Germany (19 goals in four games) or Nigeria in Saturday’s climactic gold medal showdown.

No nation have ever won both men and women’s gold medals in the same Games. If the men should triumph then the women would deserve no less. But there is plenty of football still to be played. And it has not escaped attention here that Germany – of painful memory – is the one country standing in the way of not one, but both.