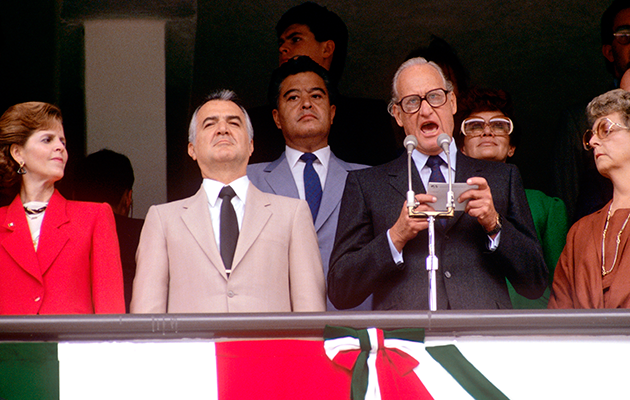 Skulduggery is nothing new when it comes to World Cup host awards, whatever the controversies over Germany 2006 and South Africa 2010 as well as upcoming Russia and Qatar in 2018 and 2022 respectively.

New evidence has been revealed of how the then FIFA president Joao Havelange comprehensively stitched up the United States over the award of the 1986 finals to Mexico.

The tale is told by authors Claudia Fernandez and Andrew Paxman in new edition of their biography of the Mexican television mogul Emilio Azcarraga, owner of the Televisa entertainment giant whose ‘properties’ include Club America and Necaxa as well as the iconic Estadio Azteca**.

Azcarraga’s opportunity to buy into world football came in the autumn of 1982 after Colombia was dropped by the world football federation as prospective host of the 1986 finals.

Colombia had won host rights when the finals featured 16 teams. Subsequently, however, to fulfil Havelange’s promise to Africa in winning the FIFA presidency in 1974, the finals were expanded to 24 nations.

During the 1982 finals in Spain Alfonso Senior, head of the Colombian federation, told Havelange that Colombia could stage the finals only if they reverted to 16 teams. That was impossible for Havelange so, in October 1982 after the Colombians refused to budge, he launched his search for a new host.

The 1986 finals had been allocated to the Americas and no South American nations were economically capable. Canada and the United States both expressed interest. But already, according to Fernandez and Paxman, the die was cast.

They describe how “days after Colombia’s withdrawal . . . Havelange flew to Mexico to meet his good friends Guillermo Canedo – then his most loyal supporter in the FIFA executive committee – and Emilio Azcarraga.

“Within a few months this meeting was followed by the creation of a committee which would present a [hosting’ recommendation to the exco.

“Once the commission members had been shown Mexico’s likely facilities by Canedo, they flew directly to Europe without bothering to consider the US and Canada.

“FIFA’s rules required an inspection of all potential hosts but the committee made an exception on the grounds of omissions on the application files of those two countries. In March 1983 the commission presented a report recommending the choice of Mexico.”

That was not the end of the fiction. Delegations from Canada and the US – along with Mexican federation president Rafael del Castillo – were invited to Stockholm on May 20, 1983 to present their candidatures to Havelange and his FIFA exco (observed by newly-promoted general secretary Sepp Blatter).

Fernandez and Paxman say: “While Canada had no chance, the US came armed to the teeth with a delegation led by Henry Kissinger, former Secretary of State and negotiator of the latest peace deal between Israel and the Arabs, plus his ‘dream team’ which included another ex-Secretary of State in Cyrus Vance along with Pele and Franz Beckenbauer [veteran stars then with New York Cosmos].”

Not only had Mexico already staged the finals, in 1970, but the US bid was vastly superior. FIFA’s minimum demands for the finals included 14 stadia with a minimum capacity of 40,000. US had all of that and more. Mexico had only six. As for transport, communications, transport and accommodation, it was also no contest.

Kissinger and his team spent an hour outlining their bid in private to the exco. The Canadians needed half an hour. Del Castillo went in for just eight minutes and joked later: “Actually, I needed only one minute to convince them.” The vote for Mexico, announced Havelange afterwards, had been unanimous.

Reasons for Havelange’s determination have remained the subject of speculation. Mexico was not the football power it would become. There was no significant money then in the domestic club game and the national team were regular whipping boys at the World Cup.

However, say Fernandez and Paxman, Havelange had favours to repay and wider financial and business interests to pursue.

Canedo, the former car salesman who had become Azcarraga’s football specialist, had been one of the first FIFA voters to switch to Havelange from incumbent Sir Stanley Rous in the 1974 presidential election. Two years later Havelange had powerfully endorsed an ultimately vain attempt by Azcarraga to buy the Brazilian channel TV Record.

The 1986 finals were the first to run by a private corporation, Televisa, with Canedo as chairman of the organising committee. Azcarraga approved the expenditure of $45m which included $10m on building a international media centre in the heart of Mexico City which was later converted into a convention centre.

At one stage the finals were endangered by the Mexico City earthquake of 1985 which left 5,000 dead. But Havelange, Azcarraga and Canedo were not going to be put off by such distractions. Further trouble erupted at the Opening Match between Italy and Bulgaria when the international TV signals went badly awry.

Mexican president Miguel de la Madrid demanded a meeting with Azcarraga, Canedo, Havelange and directors of the the European Broadcasting Union. All was resolved. The finals were broadcast to the world – Hand of God and all. Televisa raked in millions of commercial dollars from the rights while leaving the Mexican government with a heavy loss on the new infrastructure.

Not that Kissinger appreciated being outmanoeuvred.

Later he reputedly observed that “my first real experience of soccer politics sometimes left me feeling nostalgic for the Middle East.”