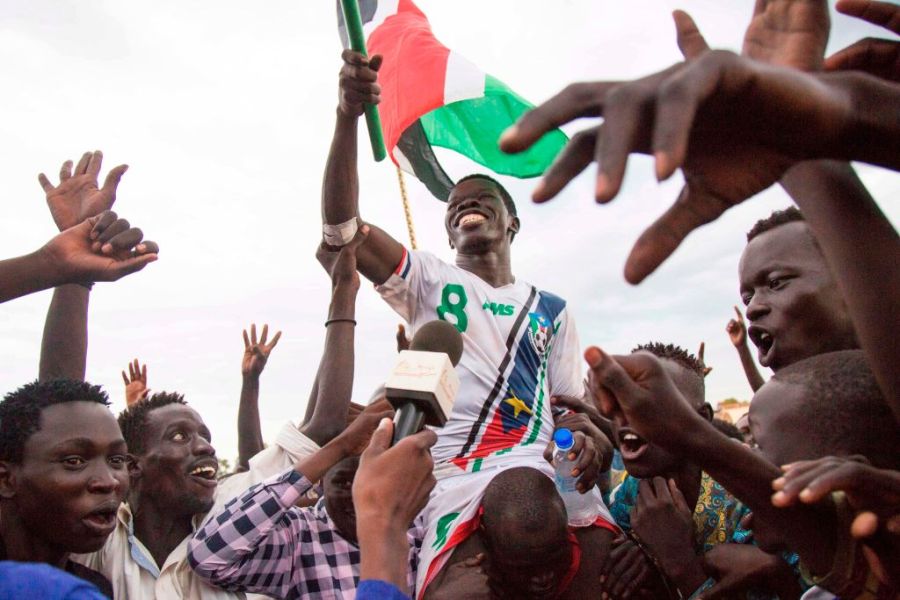 Sometimes Ashu Besong simply chuckles. It is all he can do when pondering his problems as coach of South Sudan, the youngest country in the world. At times, he is still confounded by his new environment. South Sudan doesn’t have a national stadium and the national training centre in the capital Juba boasts the only professional football field in the whole country.

The “Bright Stars” play their home fixtures in neighbouring Kenya. In November, they triumphed 1-0 against regional heavyweights Uganda, courtesy of a 36th-minute penalty from striker Tito Okello, who plays in Kenya for Gor Mahia. South Sudan protected their lead to record their first three points in the Africa Cup of Nations qualifiers and maintain a slim chance of reaching the finals in Cameroon in 2022.

The result left Besong buoyant. The majority of the team were under 25. South Sudan’s population is young.

“In the long-term, we have to build a program for the grassroots,” says Besong. “There are so many young talents in South Sudan. Each club should have youth teams – Under-12, Under-15 and Under-17. We will need years to develop those talents, to become elite players.” 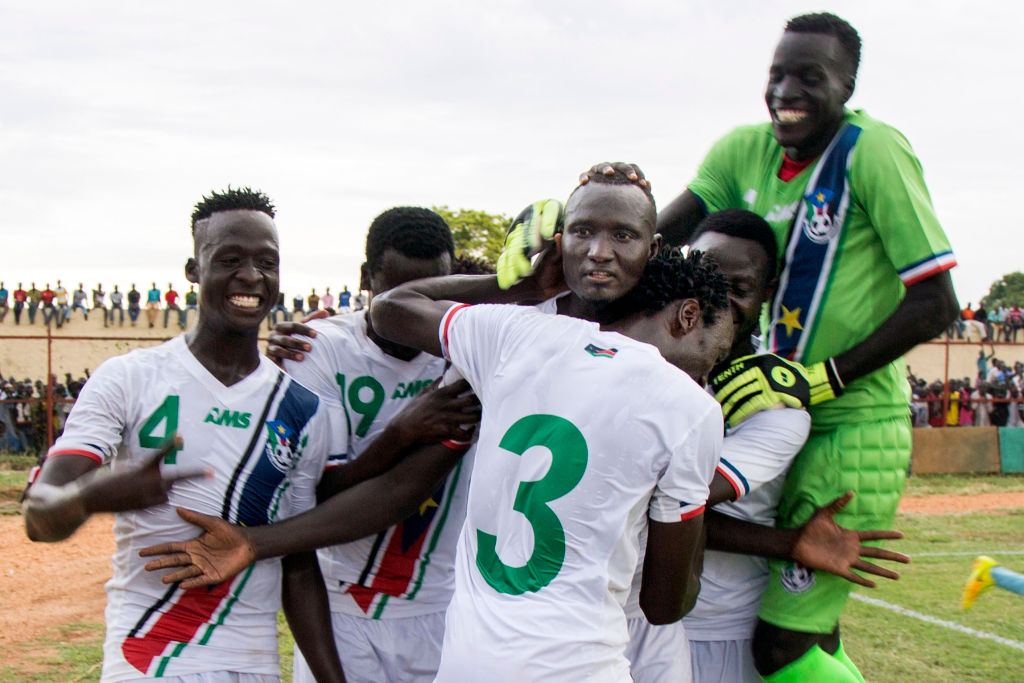 The German-Cameroonian coach arrived in Juba in 2019 to find the team in the lower parts of the FIFA ranking. They participated in the last three Africa Cup of Nations qualification campaigns as well as the preliminaries for the 2018 World Cup, but never made much of an impact. It didn’t take Besong long to discover why.

“The clubs have nothing, just a name, a few balls, a few training materials and an open space where they train,” recalls Besong. “Most of the games are being played on these grounds. They don’t play on grass, not even on artificial pitches. I sometimes go there to scout. Even dogs pass by. It took me a few months to get that into my head.”

Al Rabit FC, the current cup winners, participated in the Confederation of African Football (CAF) Confederation Cup, but were eliminated in the qualifiers by Tanzania’s Namungo FC. In the local league, Amarat United, Atlabara FC and Kator FC are among the other leading clubs. All 12 clubs in the Juba League play on dust grounds with potholes.

Football development in South Sudan remains slow. The professionalization of the league, nationwide coach education and infrastructure are a priority to cultivate a sporting culture and advance South Sudan’s fortunes, but without much funding those objectives remain problematic.

Besong explains: “South Sudan still needs to invest a lot in football, which I don’t think is a priority now. The economy, even though they are facing a lot of devaluation of their currency, is at its best. Some of the citizens are returning, some investors are getting in. In other regions, outside of Juba, you still have crimes and attacks from pockets of resistance. The government has other priorities – schools, hospitals, roads. It is going to take a while. The government didn’t fund anything, not even one dollar.”

South Sudan Football Association (SSFA) president Francis Amin adds: “I am lobbying the government and trying to convince them that sports need support. I am working hard on that one.”

In 2012, South Sudan gained independence, but civil war stymied the implementation of the 2018 South Sudan peace agreement as well as social and economic progress. Sports and football are not a priority in the country and the SSFA is financially dependent on both CAF and FIFA. The African governing body distributes $500,000 per year to the young member association, but that funding was reduced to $300,000 due to lack of women’s football activity.

Last December, the SSFA took its first steps to transform the domestic women’s game by appointing Jean Sseninde – a former Uganda international who also played for the likes of Crystal Palace and Queens Park Rangers – in a consultancy role to lead the federation’s four-year women’s football strategy, Stars Unite. In 2019, South Sudan participated in the regional CECAFA Women’s Football Championship, but the new strategy will still strongly focus on empowering women to play. It is about breaking barriers, according to Sseninde.

The SSFA has also benefited from FIFA’s development programme, receiving over $8 billion since 2016. By comparison, neighbours Sudan have received $5.72bn from the world federation in the last four years. The FIFA funding is helping the construction of a national stadium in Juba at a cost of $5.15 million. The SSFA is also planning to upgrade stadiums in the cities of Wau and Makalal.

Coincidentally, South Sudan was the first African country to support Gianni Infantino’s candidacy for FIFA president in 2016. Then-SSFA president Chabur Goc Alei was later banned from all football-related activities for ten years for misappropriation of FIFA development money and bribery.

“Chabur is creating a lot of conflict because he has been suspended for five years,” says Amin. “We are trying to learn from that mistake, to correct the federation and put a system in place. All the departments know how the system works: how to use the FIFA money and how to be transparent. We are trying not to repeat the same history again.”

Besong knows that internal and external politics are never far away. It is something he picked up as coach of Cameroon’s Under-20s, his first role on the continent. Previously, he worked as a coach under Sven-Goran Eriksson at Leicester City.

He tempers sporting expectations as well, even if Amin harbours dreams of becoming a regional power in the short-term.

Besong doesn’t entertain fanciful ideas of possession football. The Bright Stars have their limitations and so it is the playing personnel that dictate tactics. The former Bundesliga player demands organisation and discipline from his team. “I can’t say that we, South Sudan, are going to play offensive, stylish football – teams would beat us 10-0 every game,” explains Besong. “We have to design a system where we attack and defend compactly. You have to develop local players to be able to play against top professionals coming from Europe and Israel.” 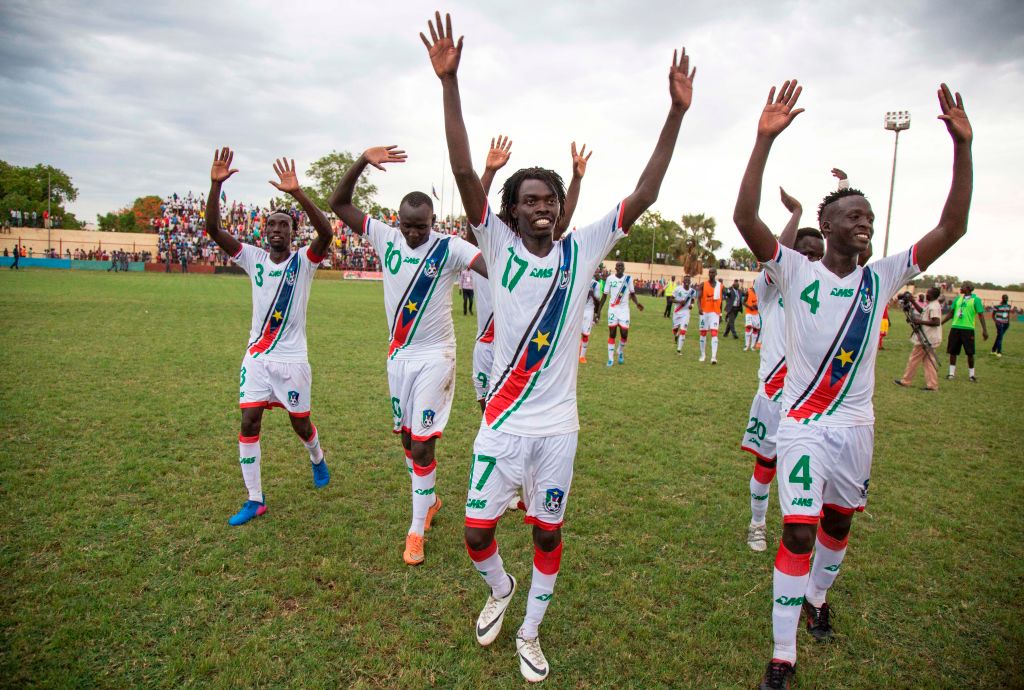 Besong, however, can count on the experience and knowhow of players from the diaspora in Australia, where more than 11,000 South Sudanese live. At the start of the Africa Cup of Nations qualifiers, he selected twelve Australia-based players for his 32-man squad. In November, six players from the Australia contingent integrated the squad. “I’ve got two scouts in Australia,” explains Besong. “They always notify me of players. Those players bring that professionalism that helps the local players to learn from them.”

Besong and the FA are also scouting for players in Norway and Hungary. Every avenue is being explored to improve. The team can still reach the Africa Cup of Nations with two qualification matches remaining in March. Bottom of Group B on three points, South Sudan will play both Burkina Faso and Malawi. Qualification for the finals however is not a must according to Besong, even though it would be a confirmation of South Sudan’s pedigree and reminiscent of the triumphs of a united Sudan in the ‘70s.

“The country and the federation are going in the right direction,” concludes Besong. “I am a little bit satisfied. There is a lot we can achieve and do. We need the resources. If you don’t put money into football, it will be difficult to achieve anything. When we have those resources, we will be able to compete against other big nations. For now, I am very satisfied. At the youth level, the junior national teams are doing very well. You might see one of the South Sudanese national teams in the youth African Cup of Nations. That would be a very great achievement.”