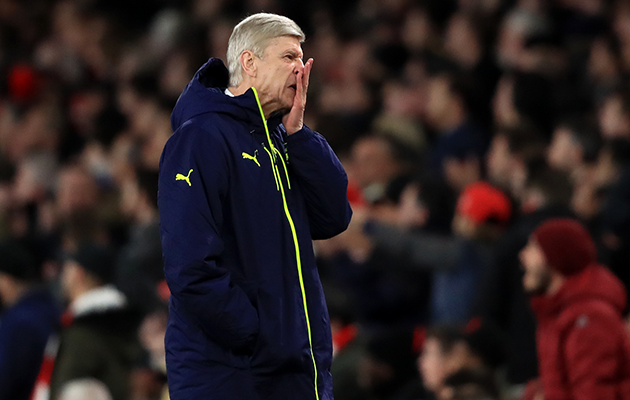 Arsène Wenger hit out at the team of match officials, describing some of their decisions as “absolutely unexplainable and scandalous,” as he tried to explain Arsenal’s 5-1 Champions League defeat to Bayern Munich.

It was the the club’s heaviest defeat at the Emirates Stadium, but Wenger excused his players and focused his attack on the match officials following a 10-2 aggregate defeat. It was the second biggest defeat in the knockout rounds of the Champions League. Bayern also hold the record for the largest margin of victory courtesy of a 12-1 aggregate win over Sporting Lisbon in the 2009 round of 16.

Trailing 5-1 from the first leg, Arsenal went 1-0 up through Theo Walcott, but the night turned in the 53rd minute when Robert Lewandowski was fouled by Laurent Koscielny. The referee, Tasos Sidiropoulos, awarded a penalty, and initially showed the French defender a yellow card, which was subsequently and somewhat controversially upgraded to red on the advice of additional assistant referees. Lewandowski scored the resulting penalty and against the ten men of Arsenal Bayer ran riot, scoring four more second half goals

Defeat made it a seventh consecutive last-16 exit for Arsenal, but Wenger chose to accentuate the positives – of which there were some in a spirited first half performance – and chose to focus instead on the display of the match officials.

“We produced a performance with the spirit and pride we wanted,” Wenger said. “After that the story finishes badly. We were really unlucky because it was a 100% penalty at 1-0 in the first half on Walcott. In the second half the ref killed the game. He was very, very powerful for Bayern. Lewandowski was offside and it was not a penalty and, on top of that, he gives us a red card that kills us completely.

“It’s just not serious. When you see the importance of the games and you see an attitude like that I am absolutely revolted and sorry for people who come and pay a lot of money to watch this kind of game.”

“Bayern are a good side but they can say thank you to the referee for the decisions in the second half. It leaves me very angry and frustrated. Even more so because we are in a difficult period. It is absolutely unexplainable and scandalous. I will take a lot of criticism but it doesn’t change my mind. It doesn’t make them right. The players have not let me down. The referee has let us down.” 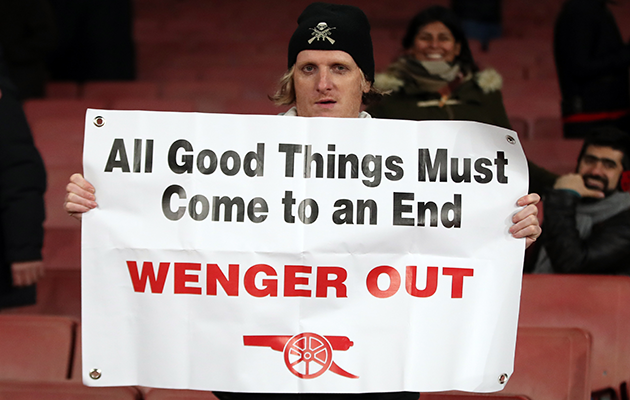 Before the game around several hundred Arsenal fans marched from the site of the old Highbury stadium to the Emirates, demanding Wenger leave the club when his contract expires in the summer, and banners appeared throughout the match telling the 67-year-old to leave.

Wenger , though, insisted Arsenal had played well and that were it not for the referee the result would have been different.

“I think this club is in a great shape but at this moment it is going through a bad situation,” he said. “What needs to change is the result in the next game. Is the uncertainty affecting the club? No. Tonight, there was no uncertainty in our game. I felt we played very well. It was more the decisions of the ref which killed the game. It’s irresponsible from the referee. We have to stand up and give all kind of explanations but at the end of the day that is the reason for tonight’s result.”