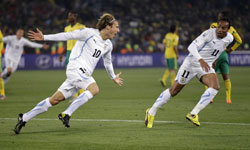 South Africa’s hopes of reaching the knockout stages of the World Cup nosedived after they went down 3-0 to Uruguay in Pretoria.

Two goals from the outstanding Diego Forlan sent the South Americans on their way, and by the time Alvaro Pereira added a third in stoppage time, the hosts were a beaten, demoralised outfit.