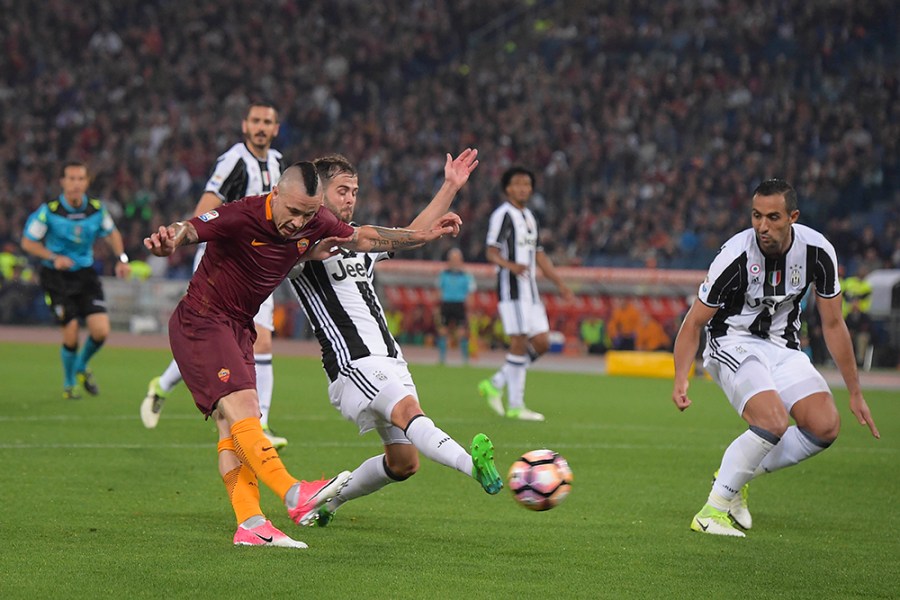 Perhaps the most significant “indicator” in the wake of Roma’s surprise 3-1 home win over leaders Juventus on Sunday night came from their coach Massimiliano Allegri.   For all that he had just been soundly beaten, Allegri seemed only relatively upset.
For a coach who often stomps up and down the touchline like a bear with a sore tooth,  berating and shouting at his players, he was remarkably calm: “We were a bit distracted… in the second half we fell asleep a bit, but I am not worried. On the contrary, this will do us good, because we’ve got to get ourselves back on track for Wednesday [Italian Cup final v Lazio] and then for Crotone [next Sunday].”
Allegri is right, of course. His side did indeed look a deal less hungry than Roma in the second half. This is only normal. Juventus still have a four point lead with two games to play, at home to Crotone and away to Bologna. The Old Lady can still win the Serie A league title by beating the relegation battlers next Sunday.
In the meantime, though, Juve have two appointments awaiting them, namely the Italian Cup Final, which is par for their successful course, and above all the Champions League final versus Real Madrid, an “appointment” which has so obviously been their main seasonal objective. In the end, losing to Roma, however unwelcome, simply did not matter enough.
There was a moment early in the second half when Roma’s inspirational captain, Daniel De Rossi, “clattered” into Juve playmaker Miralem Pjanic. For his foul, he correctly picked up a yellow card. Yet, he did not mind. He had made his point. You lot might be on the high road to Cardiff but we want the points here tonight, we at least want to finish the Serie A season in second place.
How else do you explain Roma’s second half recovery and dominance? For the first 20 minutes, this had looked like a game that was about to follow a very familiar script.    Roma had the majority of possession but it was Juventus who first hit the post, through Ghanaian Kwadwo Asamoah, and then scored in the 21st minute, through Gabon’s Mario Lemina.
Almost from that moment, however, Juventus lost their habitual control of the game.   One can only suspect that, in the minds of many Juventus players, there was the feeling that there will be other days to win the league, so let us just concentrate on getting out of this, alive, well and not injured just 19 days away from their Welsh date with destiny and Real Madrid. As it was, Allegri’s initial line-up had made the point with key figures such as Andrea Barzagli, Giorgio Chiellini, Paulo Dybala, Dani Alves and Claudio Marchisio all left on the bench with Allegri.
One suspects that, with a prize on the plate on Wednesday night, Juventus will offer a much fiercer resistance to Roma’s city cousins.  That Italian Cup final, too, offers the intriguing consideration that everyone in the Juventus squad will be playing to make a point, to book their place in the team for Cardiff.
So, all in all and notwithstanding a terrific second-half Roma performance, it would probably be a mistake to read too much into this defeat. Cometh the day, cometh the forthcoming finals and we may see a different Juventus.
On a highly satisfactory night for Roma, one when they confirmed their second place standing notwithstanding the current terrific form of third placed Napoli (5-0 away winners v Torino), there was one negative. Namely, that man Totti again. Brought on as a substitute in time added-on, Totti spent less than three minutes on the pitch, three minutes when he did not even touch the ball.
When the final whistle was blown, rather than accompany the rest of the team to celebrate with the “curva sud”, the great man marched off the pitch, looking less than happy. As the final curtain is about to come down on his career (at home to Genoa on May 28th), he looks less and less the happy camper. Yet, at 40 years of age (41 in September) the time has come…or has it not, at the end of a season when he had been largely marginal to the Roma team’s efforts.
Totti is not the only one with end of season blues. Take a look at Internazionale. When Inter beat Atalanta 7-1 at the beginning of March, critics were ready to suggest that this was just the beginning of a mini-renaissance that would put them back into the Champions League zone. Not so, since then Inter have picked up just two points in eight games, while on Sunday they lost again, beaten 2-1 at the San Siro by the useful Sassuolo.
Inter are currently in eighth position and almost certainly out of European competition for next season. Meanwhile, Atalanta’s 1-1 home draw with Milan wrapped up their fifth place and guaranteed them a Europa League spot for next season. For Inter’s Indo-Chinese ownership, there are going to be lot of problems to iron out over the summer.