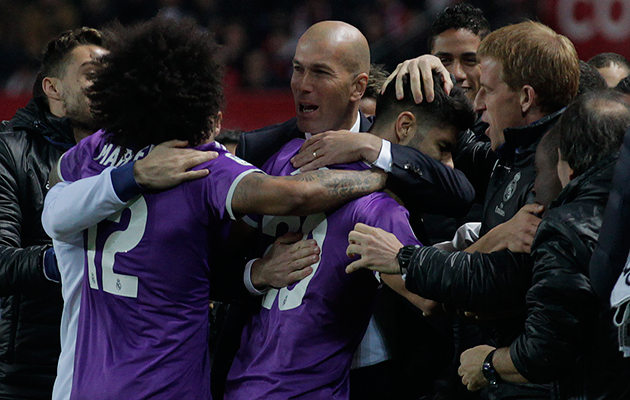 The battle to win La Liga will once again come down to a straight fight between Real Madrid and Barcelona and the Catalans have stolen an early march on their great rivals. We are still in September but already Barca have a seven-point lead over Real Madrid and that could be vital in their title challenge. They have shrugged off the loss of Neymar by playing some brilliant football and appearing more solid defensively, leaving them with a 100 per cent record so far. Meanwhile Real Madrid have endured a very shaky start to the season and have won just three of their six games, leaving them sixth in the table.

Thus far the season is not going to script. Barcelona won the league in 2014-15 and 2015-16 and went into last season as favourites. However, Zinedine Zidane has transformed Real into an all-conquering side, perfectly blending strength with technical excellence, and they romped to the title and also won the Champions League for a second successive season. Ahead of the current campaign they were the favourites, and the odds on them winning it shortened when PSG activated Neymar’s release clause and prised the Brazilian away from the Nou Camp.

That transfer dismantled Barca’s fabled attacking triumvirate, and they were tipped to struggle, even though they spent big on Ousmane Dembele as a replacement. Yet Barcelona are playing some fantastic football and do not seem to be missing Neymar one bit. Lionel Messi has always been the star man at Barcelona and he has stepped it up a gear this season, banging in nine goals in six games to lead the goal scorer charts in La Liga. Real’s Cristiano Ronaldo is a shoo-in for the Ballon d’Or this year and that will bring him level with Messi on five wins apiece as the all-time record holders for the award. Messi will be desperate to edge back ahead of the Portuguese and he is playing like a man possessed.

It is also easy to forget that Neymar was the least productive of Barcelona’s attacking trio. Messi and Luis Suarez racked up more impressive numbers while they were playing together, and that remains an outrageously talented strike partnership. Dembele has suffered a hamstring injury, but when he returns he will further bolster an impressive attack, while defensively Barca have kicked on. They have conceded just twice in six games, scoring 20 goals in the process, and they are in exceptional form at both ends of the pitch.

This will be worrying for Real Madrid, who have dropped points against Levante and Valencia and slumped to a surprise 1-0 defeat at home to Real Betis. Last weekend they beat Alaves 2-1, but the victory was not comfortable. Real Madrid did not sign anyone of note this summer, and the old adage goes that if you stand still you go backwards. Zidane may regret not signing another Galactico to keep his stars on their toes, as the key players are likely to get too comfortable.

It is a long old season but right now Barcelona are looking good value for the title. Research the best betting sites before placing action and you will see that Barca are now best priced at 5/8, while Real are all the way out at 7/4. Of course, Real could rally and that 7/4 will tempt a lot of punters as Zidane’s side have proven themselves as the best team in the world over the last two years. But they need to recover their swagger and find consistency, as Barcelona look hell-bent on retunring to the summit of Spanish football once more.