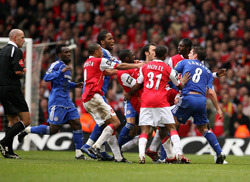 Arsenal’s Emmanuel Adebayor has given an additional one-match ban and fined £7,500 for his reaction after being sent off in the Carling Cup final.

The striker had to be dragged off the pitch after being dismissed for aiming a punch at Chelsea’s Frank Lampard.

The Football Association found him guilty of “reacting aggressively and failing to leave the field of play immediately”.

Adebayor was banned for three games for the initial offence.

A statement from the FA read: “In sentencing, the commission stated that it had taken into account Adebayor’s playing record and the mitigation offered.

“Adebayor is currently serving a three-match suspension following his sending-off during the match.

“This additional suspension will come into effect after those three games have been completed.”