Egypt reached the Africa Cup of Nations final, beating Burkina Faso 4-3 on penalties after teh match had finished in a a 1-1 draw.

The match turned out to be a tale of two goalkeepers with 44-year-old stopper Essam El Hadary being Egypt’s penalty shootout hero, saving Bertrand Traore’s spot-kick to secure victory. In contrast, Burkina Faso’s Herve Koffi, only 20 years old, saved Abdallah El Said’s spot-kick early in the shootout, only to see his own penalty then saved by the evergreen El Hadary.

In normal time Roma forward  Mohamed Salah opened the scoring for Egypt when he curled a superb shot into the top left corner. Burkina Faso levelled when Aristide Bance did well to chest down Charles Kabore’s cross and volleyed in.

In doing so, they became the first side to score against Egypt this tournament, whose success in Gabon has been based on a miserly defence. 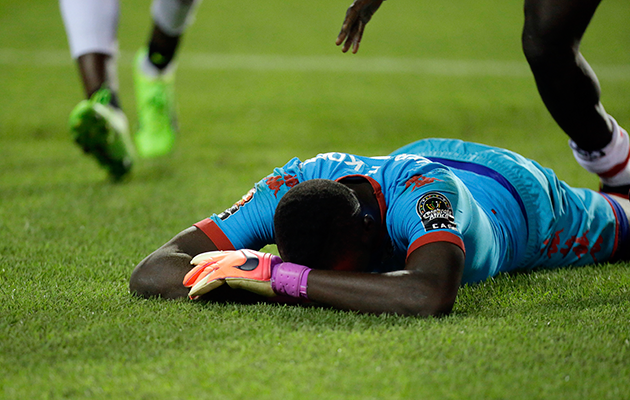 Burkina Faso’s Herve Koffi is distraught after his team’s exit.

El Hadary is the oldest Nations Cup player in history and he now has a chance to win his fifth African title.

“Everyone is comparing the team to the older generation. Each generation has a personality and character of its own,” he told reporters. “The generation of players with whom I played in the past, and with whom I won four Nations Cups, were a talented crop who grew in experience year after year and who played together for such a long time that success was inevitable.

Egypt’s victory continues their remarkable success rate in Nations Cup semi-finals – they have now won their past six. A victory on Sunday against the winners of Thursday’s semi-final between Cameroon and Ghana, will extend their own record as the most successful Nations Cup side with an eighth title.

“From the beginning of the game we knew it was not going to be easy because Burkina Faso are a very fast team. They were better than us,” Cuper said.

“There was a lot of fatigue. Our wish was to come to penalties because everything can happen.

“We are very happy to be in the final. For now, we will try to recover and find out who will be our opponent to adopt our strategy according to their identity.

“I am hopeful that this 13th final will bring us luck, even if I am not really lucky in the final. It’s already a very special finale for me. Our goal will be to win. I hope we will have the opportunity to celebrate [victory] with the whole country. ”

Burkino Faso coach Paulo Duarte was unhappy with the performance of the match officials.

“Everyone saw in the first half: one against one, my attacker was in the area and the defender cut the ball with his hand,” Duarte lamented.

“Someone did not let us win the game.”