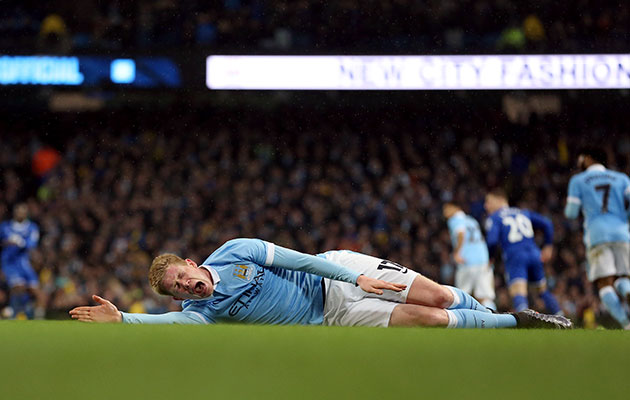 Kevin De Bruyne’s agent is worried the Manchester City forward could miss the Euro 2016 finals after scans confirmed the Belgium international had torn ligaments in his knee and ankle in the Capital One Cup semi-final victory over Everton on Wednesday.

De Bruyne was key to City’s success, scoring the second goal and creating the third, in the 3-1 victory. During stoppage time he appeared to catch his studs in the turf and twist his knee as he was challenged by Everton defender Ramiro Funes Mori. De Bruyne left the field on a stretcher and City were forced to complete the match with ten men.

De Bruyne’s agent, Patrick De Koster, admitted that De Bruyne will be out for a minimum of six weeks, adding that it is too early to judge whether he would play again this season.

“Kevin will be out for at least six weeks but it is too early to know more at this stage,” De Koster told the Guardian.

“He’s confident. Of course he is a bit sad that he will miss so many important games like the Capital One Cup Final and Champions League but Kevin would not be Kevin if wasn’t already thinking about playing again for City.”

Asked whether the injuries could mean De Bruyne misses out on playing for Belgium at Euro 2016, De Koster said it was too early to make adefinitive decision.

“You never know,” he said. “I’m not going to discuss that at the moment. All Kevin can do now is concentrate on getting better and we will see.

“He will have more tests over the next couple of days and then we should know more.

“I’ve known Kevin since he was 15 and he has never had such a bad injury before. But we hope he can come back quickly to help City.”