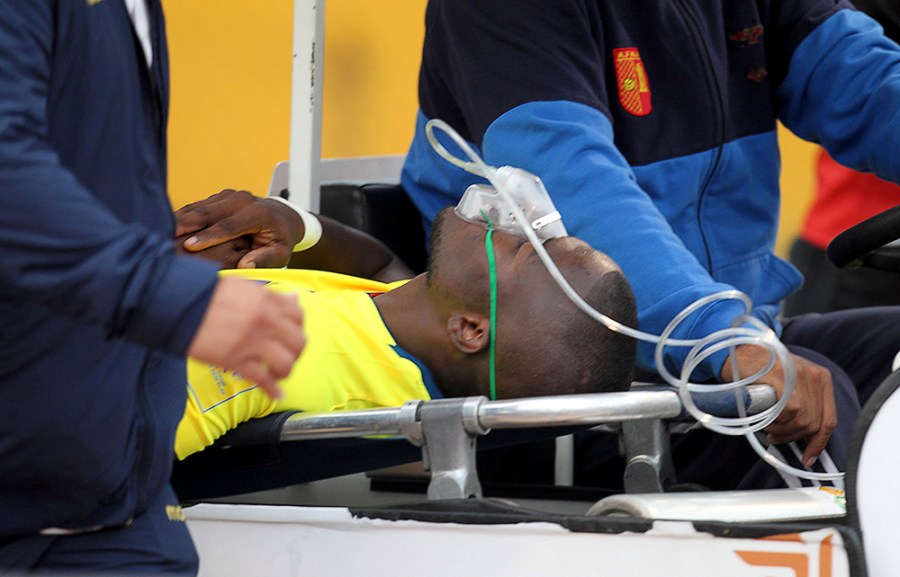 Enner Valencia’s child support row took a fresh twist on Thursday as the on loan Everton striker was chased by police after he was carried off the pitch during Ecuador’s 3-0 World Cup qualifying victory over Chile.

Valencia is reported to owe the mother of his daughter – Sharon Valencia – £13,000 in child maintenance and police turned up to Ecuador’s training session ahead of Thursday’s game in the Ecuadorian capital Quito.

The forward managed to avoid arrest as some of the officers apparently failed to produce the correct documents. However, local police did not give up their pursuit easily, with a number positioned on the halfway line at the Estadio Olímpico Atahualpa.

With the game reaching its conclusion and the points apparently safe, Valencia fell to the floor and had to be wheeled away on a medical buggy whilst receiving oxygen. Some reports claim he was suffering from altitude sickness in the rarefied Quito air, but most surmised that he was faking injury in an attempt to avoid the clutches of the watching police.

Fan footage shows a dozen or so police officers – some of whom were carrying shields – pursue Valencia as he is being taken away. Valencia is said to have evaded arrest before being taken to hospital for treatment. The rest of the Ecuador squad reportedly argued with police to ensure he could make it to the relative sanctuary of the dressing room.

Reports suggest he’s now had an arrest order lifted and spent the night at Ecuador’s training ground base on Thursday.

Paul Marin – one of the lawyers working on behalf of the mother of Valencia’s five-year-old daughter – is quoted in the Liverpool Echo as saying: “It’s lamentable that certain police officers didn’t collaborate with the detention of the footballer Enner Valencia, to ensure compliance with a judicial order.”

Valencia’s attempts to flee may not have been in vain however as the player’s lawyer, Juan Carlos Carmigniani, agreed a deal to void the court order for the time being.

Here’s the footage of the incident – unfortunately, not accompanied by the Benny Hill Yakkety Sax theme tune.