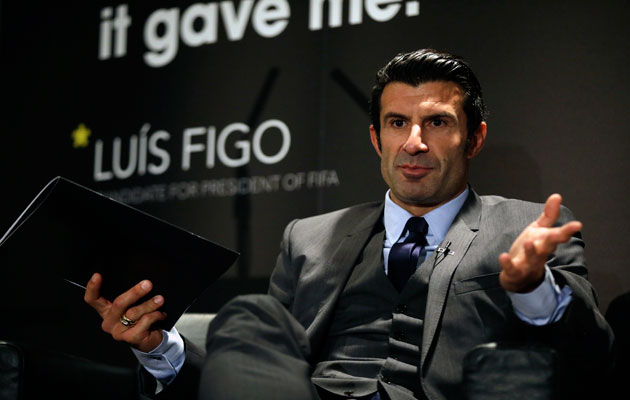 Luis Figo has dropped out of the race to become the next FIFA president, leaving the contest a straight fight between incumbent Sepp Blatter and Prince Ali Bin Al-Hussein.

The Portugal great and former FIFA world player of the year said in a statement sent to The Associated Press that he refuses to go along with an election process that is designed “for the delivery of absolute power to one man”.

Three rival candidates entered the race in January: Prince Ali bin al-Hussein of Jordan, Luis Figo of Portugal and Michael van Praag of the Netherlands. Van Praag, however, dropped out of the race earlier today, and endorsed the candidacy of FIFA vice president Prince Ali.

Luis Figo’s statement contradicts one made by his spokesman on Wednesday, in which he dismissed reports claiming he was poised to withdraw from the race.

Running for president of FIFA resulted from a personal decision, taken after listening to many pertinent people in the realm of international soccer.

I sought out the support needed for me to stand, I formally presented my candidacy, and the reactions in the soccer world were so overwhelming — both in public and in private — that I was reassured that I had made the right decision.

The realm of a sport which gave me everything to become what I am, and to which I now offered to give something back, is hungry for change. FIFA needs change and I feel that the change is urgent.

Guided by that wish, by the formal support I collected, and by the incredible wave of support from soccer players, former players, coaches, referees and administrators, I imagined and presented a plan of action — my election manifesto for the FIFA presidency.

I traveled and met extraordinary people who, though they recognized the value of much that had been done, also concurred with the need for change, one that cleans up FIFA’s reputation as an obscure organization that is so often viewed as a place of corruption.

But over the past few months I have not only witnessed that desire (for change), I have witnessed consecutive incidents, all over the world, that should shame anyone who desires soccer to be free, clean and democratic.

I have seen with my own eyes federation presidents who, after one day comparing FIFA leaders to the devil, then go on stage and compare those same people with Jesus Christ. Nobody told me about this. I saw it with my own eyes.

The candidates were prevented from addressing federations at congresses while one of the candidates always gave speeches on his own from the rostrum. There has not been a single public debate about each candidate’s proposals.

Does anyone think it’s normal that an election for one of the most relevant organizations on the planet can go ahead without a public debate? Does anyone think it’s normal that one of the candidates doesn’t even bother to present an election manifesto that can be voted on May 29? Shouldn’t it be mandatory to present such a manifesto so that federation presidents know what they’re voting for?

That would be normal, but this electoral process is anything but an election.

This (election) process is a plebiscite for the delivery of absolute power to one man – something I refuse to go along with.

That is why, after a personal reflection and sharing views with two other candidates in this process, I believe that what is going to happen on May 29 in Zurich is not a normal electoral act.

And because it is not, don’t count on me.

I want it to be clear that I have deep respect for all world soccer, from Africa, where I got so much motivation, to Asia, where I have and will keep excellent relationships, through South America, where a new generation is emerging, and Central and North America, where so many who wanted to speak were silenced, and to Oceania, whose development we should all look at differently. And finally to Europe, where I felt there was space for normal and democratic debate, thanks to the endeavors of President (Michel) Platini.

I give my warmest thanks to everyone, because I want it to be clear that they are not the election committee and it is not they who want FIFA to become weaker and weaker.

For my part, I will abide by the ideas I leave written and have circulated, I am firm in my desire to take an active part in the regeneration of FIFA and I will be available for it whenever it is proven to me that we are not living under a dictatorship.

I do not fear the ballot box, but I will not go along with nor will I give my consent to a process which will end on May 29 and from which soccer will not emerge the winner.

My decision is made, I will not stand in what is being called an election for the FIFA presidency.

I offer my deepest thanks to all those who have supported me and I ask them to keep alive their desire for a regeneration which, though it may take some time, will come.

Figo said during campaigning he encountered hypocrisy among federation presidents around the world, and that people who wanted to speak out had been silenced. He gave no names.

He said FIFA was “living under a dictatorship” with Blatter, whose re-election is widely expected.

The election takes place on May 29.