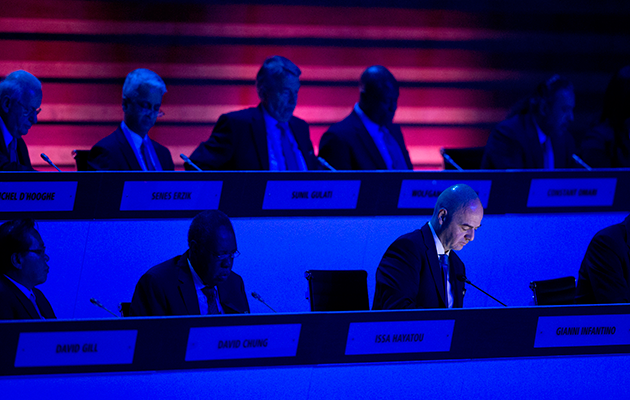 The role has been undertaken on an interim basis by finance director Markus Kattner since last summer when Frenchman Valcke was initially suspended.

Samoura has been working with and within the United Nations programmes for the past two decades and is currently the body’s resident/humanitarian coordinator and UNDP resident representative in Nigeria.

The decision was proposed by Infantino under his responsibilities as president and approved by the new FIFA Council which has replaced the old, derided executive committee.

In appointing a black woman from the developing world Infantino, in one fell swoop, has ticked a host of progressive diversity boxes.

Infantino explained the background to the appointment – and the weight of responsibility she will carry – to Congress at the Centro Banamex. He said: “Since my election I’ve been looking at the organisational structure of FIFA.

“After I made some research we thought we needed to create more efficiency and more effectve cost management. So we should split the administration into a football part and an administrative/business part.

“I believe in embracing diversity and I like to act with facts and not with words and for this reason this was the most competent person I have proposed to the council who accepted.”

As required under FIFA statutes, Samoura will undergo an eligibility check and, all being well, will take over early next month.

Infantino praised Samoura’s integrity, and said the Council was particularly impressed with her operational experience, as well as her expertise in governance and working in multi-cultural environments.

Her expertise will complement the long-standing and deep knowledge of world football within the FIFA leadership team and administration.

Infantino said: “Fatma is a woman with international experience and vision who has worked on some of the most challenging issues of our time.

“She has a proven ability to build and lead teams, and improve the way organisations perform. Importantly for FIFA, she also understands that transparency and accountability are at the heart of any well-run and responsible organisation.

“It is essential for FIFA to incorporate fresh perspectives – from outside the traditional pool of football executives – as we continue to restore and rebuild our organisation. No one exemplifies what we need more than Fatma does, and we are thrilled that she has joined our team.”

Before joining the UN, she spent eight years in the private sector, working in the fertiliser trading sector for Senchim, a subsidiary of Industries Chimiques du Senegal. Her areas of responsibility included product export and import programs, tenders, and the establishment of a national distribution network.

Since starting her UN career as a senior logistics officer with the World Food Programme in Rome in 1995, Samoura served as country representative or director in six countries: Republic of Djibouti, Cameroon, Chad, Guinea, Madagascar and Nigeria. She speaks French (her mother tongue), English, Spanish and Italian.

In her current UN role in Nigeria, she has wide-ranging responsibilities including budgeting, human resources, and procurement, among others.

She coordinates the activities of approximately 2,000 staff members, and monitors and evaluates the security, political and socio-economic situation and trends in Africa’s most populous country.

In a statement she said: “Today is a wonderful day for me, and I am honored to take on the role of FIFA’s secretary-general.

“I believe this role is a perfect fit for my skills and experience – strategic, high impact team building in international settings – which I will use to help grow the game of football all over the world. I also look forward to bringing my experience in governance and compliance to bear on the important reform work that is already underway at FIFA.

“FIFA is taking a fresh approach to its work – and I am eager to play a role in making that approach as effective and lasting as possible.”