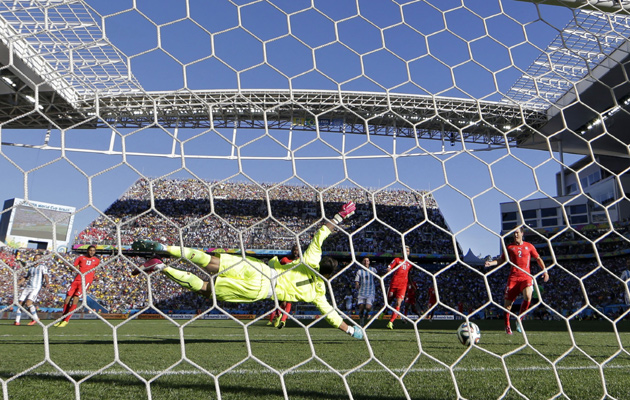 A late goal in extra time from Angel Di Maria, set up by Lionel Messi, gave Argentina a dramatic victory over Switzerland in Sao Paulo. Switzerland showed little ambition over the course of a drab 120 minutes and Argentina seemed unable to find a way through – only for Messi to tee up Di Maria for a sensational winner.

Argentina had been strangely subdued in the first half, with Lionel Messi crowded out by the Swiss defence using fair means and foul. In fact, Switzerland had the best chances of the half. Granit Xhaka’s shot was pushed away by Sergio Romero after some wonderful trickery from Xherden Shaqiri. Then Josip Drmic found himself one on one with Romero, who had stayed in his area, but the Swiss striker tried to dink his shot over the keeper, but messed up in spectacular fashion.

Argentina played with greater urgency in the second half, and Swiss keeper Diego Benaglio denied a fierce Angel Di Maria shot, a Gonzalo Higuain header and then a low shot from Messi. Switzerland had limited ambition and with the defensive-minded Gelson Fernandes on for Granit Xhaka, they held out for extra time.

Everything pointed towards penalties. Switzerland had been playing for them since the arrival of Fernandes in middle of the second half, while Argentina, Messi excepted, lacked the quality to make the breakthrough. Again and again, Messi found himself crowded out by Swiss defenders, but with two minutes of extra time, he picked up the ball and ran at the Swiss defence. He skipped past Fabian Schaer and just as it looked as if he would shoot, he laid the ball to the right, into the path of Di Maria, who curled his shot past Benaglio.

There was still time for Swiss substitute Blerim Dzemaili to head a corner against a post in the final minute. Argentina were living on their nerves, but Messi and Di Maria had saved the day.

Key moment: Angel Di Maria’s late, late winning goal for Argentina. The Real Madrid star had generally had a poor game, missing a number of chances. But he made no mistake when teed up by Messi.

Man of the match: Lionel Messi. The little man did it again, saving Argentina and dragging his side singled-handedly into the quarter-finals. He was well marshalled by Swiss defenders for most of the match, but he still found the time and space to set up Di Maria for the late match-winner.

Matter of fact: Argentina have survived six of the seven times they have played extra time or a penalty shootout at World Cup. They only lost to Germany in the 2006 quarter-final.

Talking point: A dramatic climax to a frustrating match. Switzerland attacked Argentina with verve in the frantic final minutes following Di Maria’s goal. Had they done so earlier in the game, they might have pulled off one of the shocks of the tournament. It was a sad end to Ottmar Hitzfeld’s coaching career.