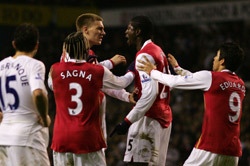 Arsenal strikers Emmanuel Adebayor and Nicklas Bendtner could face an FA investigation after they clashed in the 5-1 Carling Cup defeat to Tottenham.

With seven minutes of Tuesday’s match remaining, the pair squared up to each other and Adebayor appeared to headbutt his team-mate who suffered a cut on his nose as a result.

The incident occurred as the pair waited for Cesc Fabregas to swing in a corner Adebayor suddenly lashed out at Bendtner partner, cutting the Danish striker’s nose and forcing team-mates to step in and pull the duo apart.

Arsenal will want an explanation, while the FA could also now investigate.

Arsenal captain William Gallas, who was one of those to intervene, said: “I don’t know exactly what happened [between Adebayor and Bendtner].

“They know they made a mistake and maybe they will have to the boss and explain why they did that. They are young and they have to understand that.”

But Arsenal manager Arsene Wenger insisted: “I did not know anything about it. I didn’t see it.”

Adebayor subsequently apologised for his and Bendtner’s actions, claiming that the heat of the moment got the better of them.

“We are a strong unit and what happened last night against Spurs will strengthen our desire and determination to compete for other targets,” he told the club’s official website.

“Overall I think that we should have been more calm during the game and although I was pleased to get a goal back for the team when I came on, I am sorry for the disagreement with my team-mate Nicklas.

“We are both passionate about this club and sometimes that can be projected in the wrong way. It was a mistake. We want to focus on the games ahead and rely on our squad’s great togetherness to achieve a fantastic season.”