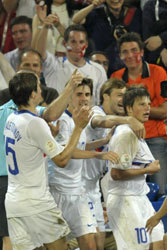 Zenit St Petersburg coach Dick Advocaat has confirmed that he expects to lose Russia playmaker Andrei Arshavin to an English or Spanish club after Euro 2008.

Arshavin, 27, has been outstanding in Russia’s run to the semi-finals and informed Advocaat before the tournament started that he wanted a move.

“I can understand that he wants to play in Europe,” Advocaat told BBC 5 Live.

“I think he has some clubs in his mind, some in England and others in Spain, because they are the only two countries he would like to play in.”

Arsenal and Chelsea have already been linked Arshavin but he would apparently prefer a move to Spain.

“We had a meeting and he said at his age this is the time to move on,” Advocaat said.

“If you lose one of your main players you don’t like it as a coach but you have to be realistic.

“It is difficult to say which league would suit him best. We play more or less 4-3-3 and our wide players have a lot of freedom.

“I’m not sure other coaches will give him the freedom but you have to otherwise it’s difficult to use him. He needs the freedom to do what he thinks is best for the team.

“I have worked with him for two years and he is a very talented player.

“He’s just turned 27, he’s very quick, he has an excellent shot on both legs and besides scoring he can also provide for other players.”