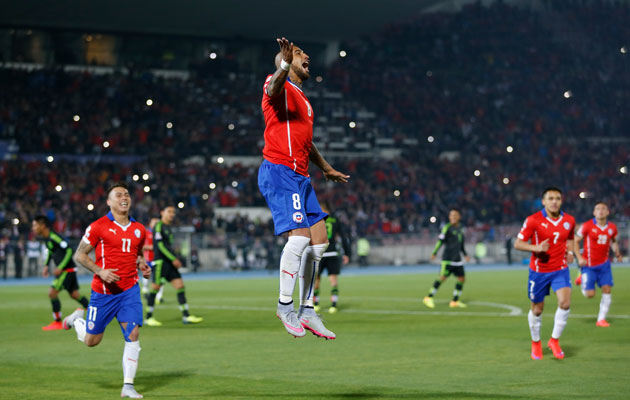 Chile midfielder Arturo Vidal had been drinking when he crashed his car on the outskirts of Santiago, police have confirmed

Vidal suffered minor injuries in the crash and is being held until Wednesday morning when he’ll face a local judge.

“The driver of the red vehicle was under the influence of alcohol,” said Chilean national police Colonel Ricardo Gonzalez.

Television images showed the Juventus midfielder leaving the San Luis de Buin hospital – where he had been treated for minor injuries – in the back of a police car.

According to media reports, Vidal crashed his Ferrari when he was driving with his wife on a highway south of the Chilean capital on their way back from a casino. A photo of the accident showed significant damage to the left-front of the car.

“Unfortunately I was involved in a traffic accident,” Vidal wrote on his Twitter account, in Spanish. “Luckily we are all well and calm. Thanks for worrying.”

Vidal scored twice in Chile’s 3-3 draw against Mexico on Monday and is currently the leading scorer at the Copa America with three goals. Chile’s next game is on Friday, against Bolivia.

“It’s very serious to let this happen right in the middle of the Copa America,” Jose Sulantay, a former coach for Chile’s Under-20 team who coached Vidal said on CNN Chile. “This kind of stuff doesn’t happen [when they’re playing] in Europe. I don’t understand coach Jorge Sampaoli and I don’t understand Vidal.”