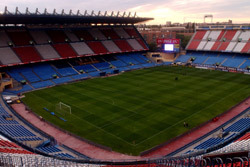 Stoke v Tottenham A defeat for Spurs at Stoke this Sunday in the Premier League and the pressure on Juande Ramos will intensify.

Atletico Madrid have urged their supporters to behave during next week’s Champions League encounter with Liverpool after Uefa confirmed the game will go ahead at Vicente Calderon.

The Spanish club were punished for crowd trouble which occurred at their previous Chapions League fixture versus Marseille at the beginning of October.

Atletico have asked their fans to respect their opponents next week, with Uefa expected to closely monitor the encounter.

A statement read: “Club Atletico de Madrid, after receiving the official notification of the provisional suspension granted by the Uefa Board of Appeals requested by the club, would like to state their approval with the decision adopted by this body, by virtue of which the Champions League match between Atletico de Madrid and Liverpool will be played at Estadio Vicente Calderon and their manager, Javier Aguirre, will be able to sit on the bench.

“Regardless of the provisional suspension conceded, the club will continue to fight the charges with the goal of completely clearing up everything that occurred and proving their innocence, along with proving the absence of the organisation’s responsibility with respect to what they have been accused of.

“Furthermore, the club would like to ask its fans to show the maximum respect towards the decision adopted by Uefa and to continue to display the good sportsmanship and fair play that they have been demonstrating at all matches to date, considering the importance lent to supporters’ behaviour for the positive development of a football match.”

Stoke v Tottenham A defeat for Spurs at Stoke this Sunday in the Premier League and the pressure on Juande Ramos will intensify.