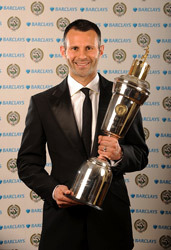 Reading, who are still hoping to gain an automatic promotion place, make the trip east to face Norwich at Carrow Road tonight.

Manchester United midfielder Ryan Giggs praised manager Sir Alex Ferguson after being named the Professional Footballers’ Association Player of the Year for the first ever time.

Despite starting only 12 matches this season and scoring one goal, the award is seen as reward for a remarkable career which has seen the former Wales international’s club honours include 10 Premier League titles, four FA Cups, three League Cups and two Champions League medals.

The 35-year-old, who will make his 800th appearance for United if he plays against Arsenal in the Champions League semi-final on Wednesday evening, was quick to praise the man who has overseen his entire career at Old Trafford.

“The manager has been massive in my career from when I first met him when I was 13,” Giggs said. “That’s over 20 years and he knows me better than anyone and our relationship has been brilliant and just gets better.

“I’ve been so fortunate to have such a great career in so many great teams, it’s not even worth thinking about what it would have been like without the manager.”

Giggs’ contract expires at the end of the season but he is expected to be offered an additional year. However, the winger did admit he will eventually move into coaching and has taken the first steps towards that and will be studying for his badges.

“As long as I’m getting picked, enjoying it and injury-free, I’ll carry on as long as I can,” he added. “At 35 you can’t look too far into the distance, you just can’t.”

Of the award, the player said: “It’s right up there, with personal accolades it’s the best to have as it’s voted by your fellow players. I’ve been fortunate to win a lot of trophies, I won the young player award twice, but this is the big one.”

Reading, who are still hoping to gain an automatic promotion place, make the trip east to face Norwich at Carrow Road tonight.