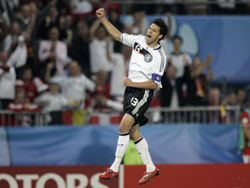 Holland are already in the last eight, but Romania can join them if they win here, or even if they draw and things go their way in the other game. Click here for the latest outright betting!

Germany’s Michael Ballack said his side had to overcome their nerves to beat Austria and secure a quarter-final showdown with Portugal at Euro 2008.

Ballack’s thunderous free-kick was the difference between the two sides, but the Chelsea midfielder admitted nerves had contributed to an earlier glaring miss by striker Mario Gomez.

“We were a little bit nervous in front of the goal and maybe that’s why Gomez missed,” said the Chelsea midfielder of the sitter missed after just four minutes of last night’s game.

“We might have missed that chance but we fought to the end.”

Ballack added: “It was a good free-kick. I hit the ball very well and it was important to score early in the second half.”

Looking ahead to the quarter-final, Ballack believes Germany will not find it easy against Portugal.

“I think they’ve played very well so far. I expect a big game – they are one of the favourites.

“It’s a big, big game for us but we can relax now three days.”

Coach Joachim Low said he was delighted with the victory, but warned that tougher challenges lay ahead.

“I’m pleased to garner this important win in a match where we were under enormous pressure,” he said.

“We knocked the host country out of the tournament, have advanced to the next round and got six points.

“But it’s also clear to me that we have to make an enormous improvement for the quarter-finals.

“We are pleased that we showed today that we belong in the quarter-finals even if we haven’t played as convincingly as we would have liked to.

“I am sure, though, that the team will now get the lift we need, and that we can play competitively against Portugal.”

Looking ahead to the Portugal game, Low added: “They are technically very strong, both as individuals and as a team.

“They want to score goals. They are definitely one of the favourites but we both want to advanc

Holland are already in the last eight, but Romania can join them if they win here, or even if they draw and things go their way in the other game. Click here for the latest outright betting!