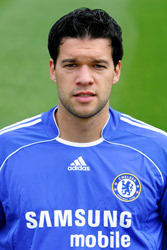 Chelsea midfielder Michael Ballack will be out of action for three weeks after undergoing surgery on both feet to remove thickened nerve tissue.

Ballack, 32, suffered pain after Germany’s 1-0 win against Wales in a World Cup qualifier on Wednesday.

The German Football Federation said in a statement: “A scan Thursday confirmed the presence of neuroma.

“After consultations with his club doctor, manager and coach, it was decided to have immediate surgery.”

Chelsea coach Luiz Felipe Scolari said: “Ballack is out for maybe two or three weeks. I am not angry – I am happy because what happened is a test for me that I am a good coach.

“It is not a problem for me if there are one, two or three injures. It is normal in football. It is not difficult for me. I need to build a different team every week.

“It is not only my players, it is players for all the clubs. Lots of teams have injuries because internationals are strong games. It is normal, you have to accept this.

“The life of the coach is like that. You have to understand this can happen.”

Ballack was sidelined earlier in the season because of a bruised foot he suffered on the first day of the new campaign against Portsmouth.