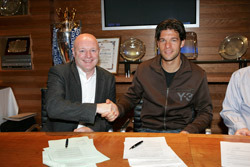 Michael Ballack made a mistake in joining Chelsea and should have joined Manchester United, according to Bayern Munich president Franz Beckenbauer.

Ballack turned down the chance of a move to Old Trafford in favour of a £130,000 per week deal with Chelsea, but the playmaker has hardly set the pulses racing since arriving at Stamford Bridge.

“I can’t see a place for him at Chelsea. He’d have been better off at United,” said Beckenbauer.

The Bayern chief believes that Ballack’s game is too similar to Frank Lampard, and as a result, he has become a peripheral figure at Chelsea.

“The game passes him by. Frank Lampard is stronger and takes his position.”

Ballack opted to join Chelsea after leaving Bayern on a free transfer last summer, but his contribution has been minimal since his arrival. In 17 Premiership appearances, the normally free-scoring midfielder has netted just three times this season.

The introduction of Ballack and Andrii Shevchenko has been cited as the main reason for Chelsea’s inconsistency this season, with both players struggling to adapt to the physical demands of the English game.